The EU is basically begging foreign companies to leave. 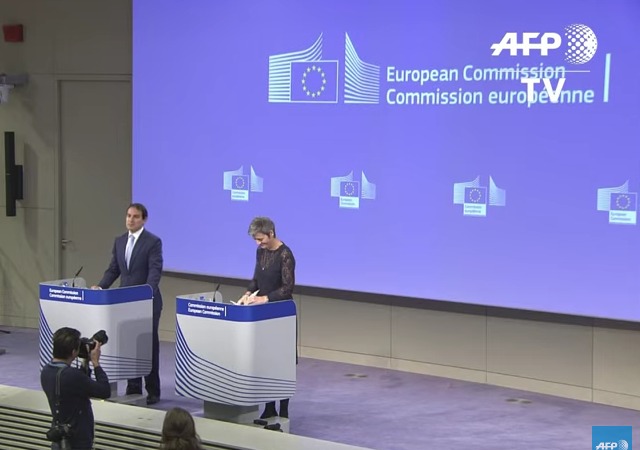 Tuesday, the EU told Ireland it must force Apple to pay back $14.5 billion in unpaid taxes, drawing anger from both sides since the ruling could harm future investments. In light of that, other situations involving the EU and US companies have come to the forefront again.

The Dutch press printed a letter from a group representing Silicon Valley companies, asking The Netherlands to resist a change in their tax system to accommodate the EU’s horrific tax system and a new UK tax that aims “in part at making technology groups that book sales offshore pay more in tax.”

A change could lead to these U.S. companies abandoning The Netherlands for other places.

The Silicon Valley Tax Directors Group (SVTDG), which represents over 80 companies including Apple and Facebook, sent a letter to Dutch Prime Minister Mark Rutte, saying that if the country changes its tax system, it could “harm the Netherlands investment climate, resulting in reduced foreign investments and a loss of jobs.” The Financial Times reports:

The country’s use of tax rulings – when a government guarantees how much tax a company will pay – has made it one of the most popular destinations in Europe for foreign investment. But tax policy in the Netherlands has come under scrutiny after the European Commission charged the Dutch government with striking a so-called sweetheart deal with US coffee chain Starbucks.

The increased regulatory attention from Brussels has cast doubt over the widespread use of such tax rulings.

Rutte visited Silicon Valley this year and asked them what The Netherlands could do to keep the companies in the country. The group told him the government could cut the tax rate from 25% to something like 20%, which is the UK rate, or 12.5% like in Ireland.

SVTDG also told him to “question the legitimacy” of the new UK tax law since they believe it is a “violation of the tax treaty between the UK and the Netherlands and, in addition, could constitute a breach of the EU fundamental freedoms.” From FT:

The UK’s “diverted profits tax” is a 25 per cent levy introduced by George Osborne, the former chancellor, in April last year to deter companies from shifting profits abroad. It has been cited as a potential risk to their business in the annual reports of technology groups including LinkedIn, Computer Sciences Corp and Qlogic.

In March, Facebook referred to the new tax when it announced a change in its structure that resulted in it booking sales in the UK, instead of routing the revenues through Ireland, where it has a more advantageous corporate tax rate.

Last October, the EU told The Netherlands it must collect 30 million euros ($32.7 million) from Starbucks due to an alleged illegal tax agreement between the two. The Netherlands government has continued to fight the EU’s decision, claiming it did nothing wrong with the deal.

The recent ruling against Apple and Ireland has reignited America’s anger over the EU’s tax rulings:

The United States fired back immediately, saying retroactive tax assessments by the EU were unfair.

“The Commission’s actions could threaten to undermine foreign investment, the business climate in Europe, and the important spirit of economic partnership between the U.S. and the EU,” a Treasury spokesperson said.

Apple wrote a letter about the situation in Ireland.

Thanks for the link – its well written. Here’s a relevant quote: “Using the Commission’s theory, every company in Ireland and across Europe is suddenly at risk of being subjected to taxes under laws that never existed.”

However I do think that Apple should have known it was at risk due to its extremely high level of accumulated earnings.

However I do think that Apple should have known it was at risk due to its extremely high level of accumulated earnings.

That’s an important point. If you pile up cash at some point a politician is going to notice. Being what they are, politicians then will scheme as to how to wet their beaks.

The EU is, like most of the rest of the developed world, desperate for revenue. Apple has well over $170 billion in cash and convertible securities stored away. It’s no surprise that the EU wants a piece of that.

How hard is it to follow the law? Easy for me, almost impossible for multi-billion dollar corporations who have more than enough blood-sucking lawyers.

Following a law which is changed after fact is much harder than one would suspect.

Both Apple and the Irish government knew (or should have known with all their high priced lawyers) that what they were doing was afoul of EU regulations. Though the amount of the retroactive tax demanded is a bit staggering, a retroactive tax is almost always assessed it cases or wrong doing.
I’m not a fan of the EU, but if you are going to sign your national sovereignty away, you have to live by the rules, or you exit.

Ha ha! Too bad Ireland didn’t #Brexit when they had the chance!