How dare Ireland try to better its economy! 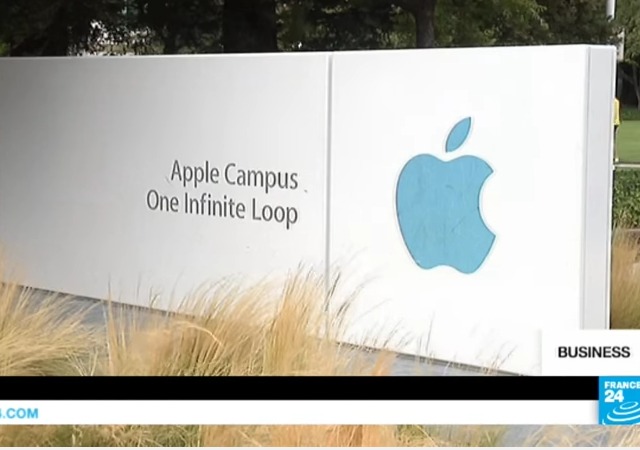 The EU alleges that Ireland gave Apple, an American company, sweet deals in order to bring jobs to the island.

The United States fired back immediately, saying retroactive tax assessments by the EU were unfair.

“The Commission’s actions could threaten to undermine foreign investment, the business climate in Europe, and the important spirit of economic partnership between the U.S. and the EU,” a Treasury spokesperson said.

This will likely cause more tension between the EU and the U.S. over taxes because the U.S. has complained numerous times that the EU’s tax policies unfairly target American companies.

Ireland and Apple plan to appeal the decision:

The finance minister, Michael Noonan, said he would move to appeal the Apple decision, adding it was “necessary to defend the integrity of our tax system.”

“It is important that we send a strong message that Ireland remains an attractive and stable location of choice for substantive investment,” he said.

Apple also said it would look to overturn the decision, although any appeals process could take years.

“The European Commission has launched an effort to rewrite Apple’s history in Europe, ignore Ireland’s tax laws and upend the international tax system in the process,” the company said in a statement.

Apple CEO Tim Cook pointed out the company chose “Cork as its European base 30 years ago and had expanded from 60 workers to almost 6,000 in Ireland.” He said:

“We never asked for, nor did we receive, any special deals. We now find ourselves in the unusual position of being ordered to retroactively pay additional taxes to a government that says we don’t owe them any more than we’ve already paid.”

That’s the thing. Ireland doesn’t want them to pay all these taxes, it just wants Apple’s business. The government knows as the company expands the jobs it brings in will provide more money to the Irish economy than just a lump sum of tax money. This tweet sums it up perfectly:

Apple: but they just said..

Dublin even refused to call the ruling a blessing. Instead, the government admitted this could cause the country to take a huge step backwards:

But far from welcoming the European Commission’s ruling on Apple, the Irish government will seek to overturn it. The reason: the threat it poses to the central pillar of Ireland’s economic model, which is to attract investment from U.S. companies looking to sell in Europe and other parts of the world.

“To do anything else would be like eating the seed potatoes,” said Michael Noonan, Ireland’s minister of finance.

A low and stable tax environment is one of the country’s key pitches, in addition to a well-educated and English speaking workforce, and a familiar legal system. For that reason the government has resisted pressure from other European nations to raise its tax rate on company profits from 12.5%, even though it relied on those nations for a bailout in the economic crisis that followed the bursting of a property bubble in 2007, which threatened to take down the country’s banking system.

Ireland is far from a tax haven, but look at what Apple and other companies have done for the island:

In 2015, its economy grew by 26%, roughly 10 times the pace of other developed economies. That was largely due to a series of so-called inversions, in which U.S. corporations merge with companies based abroad to benefit from their lower tax rates.

You can read Cook’s full statement here, but these two paragraphs really stuck out to me after he mentions that Apple established Cork as their base in 1980:

We have operated continuously in Cork ever since, even through periods of uncertainty about our own business, and today we employ nearly 6,000 people across Ireland. The vast majority are still in Cork — including some of the very first employees — now performing a wide variety of functions as part of Apple’s global footprint. Countless multinational companies followed Apple by investing in Cork, and today the local economy is stronger than ever.

The success which has propelled Apple’s growth in Cork comes from innovative products that delight our customers. It has helped create and sustain more than 1.5 million jobs across Europe — jobs at Apple, jobs for hundreds of thousands of creative app developers who thrive on the App Store, and jobs with manufacturers and other suppliers. Countless small and medium-size companies depend on Apple, and we are proud to support them.

In preliminary findings in 2014, European competition authorities said Apple’s tax arrangements were improperly designed to give the company a financial boost. There’s a range of estimates on how much Apple might have to pay. In a worst-case scenario, Apple may face a $19 billion bill if the government ultimately loses and is forced to recoup tax from the company, according to JPMorgan Chase & Co. analyst Rod Hall. The Irish Times reported earlier on Monday that the figure might not be much more than 100 million euros ($112 million), although it later revised its estimate upwards.

But if the EU rules against Apple and Ireland, guess who pays? The American taxpayer:

Still, the Commission-ordered repayments could wind up costing American taxpayers under U.S. tax law, and benefit EU taxpayers, the U.S. has said. That’s because multinational corporations with large foreign operations, like Apple, are allowed to claim a credit against their U.S. tax bills for any foreign taxes paid, an offset that reduces their tax payments to U.S. coffers.

Here is the case:

The Apple case focuses specifically on what tax should be paid in Ireland by an Apple unit registered in that country that pulls in billions of dollars from the sale of Apple gadgets to Apple products to the company’s retail operations in countries such as Germany, but pays no income tax in Ireland on the bulk of its profit.

The unit, Apple Sales International, buys the Apple products like iPhones from contract manufacturers in China and resells them to retail outlets, according to the letter the EU sent to the Irish government.

The unit, which had revenue of more than $63.9 billion in fiscal 2012, according to a U.S. Senate inquiry in 2013, pays some tax in Ireland but the EU alleged in the letter that those amounts were lower because of sweetheart deals.

*Updated to include reactions from Ireland and Tim Cook’s statement.

I wonder if anyone in Ireland is rethinking their Brexit vote now.

Since Ireland isn’t part of the UK, none of them voted in that referendum.

Following on to healthguyfsu: I wonder if Ireland (the country, not the territory of the UK) will consider an EirExit?

This sort of heavy-handedness is among the many reasons Brexit succeeded.

Apple can just refuse to sell their products in the EU and there is not a damn thing that they (the EU) can do about that.

American companies often park foreign earnings in countries like Ireland because they’ll pay US taxes on it if they repatriate, and Apple has one of the largest cash reserves of any company ($200B+ I believe).

They’re not ‘sparking profits’ in Ireland. They have 6,000 employees there.

But yes, US companies will leave their earnings overseas to avoid the nearly record high US corporate tax rates on top of the double taxation under US tax code.

New target for the IRA?

I wonder if the EU is a Trump ally.

Showing how many high paying jobs are lost overseas due to tax policy. apple should be penalized NOT the US taxpayer.

apple is so left-wing and overpriced software/hardware.
I am a retired programmer. when i just got out of college (UNM ’80 – late boomer),i could not afford their stuff and now i wouldn’t buy it or take it free.

I did not start UNM for 8 years post discharge ’69 on GI Bill.

And Microsh*t is an outstanding upright conservative company? Ha! They are just as left wing and more so crony capitalist than Apple.

Apple builds and sells their products all over the world. If you don’t like it buy something else. The government, left and right, should stay the f out of it. It’s called commerce.

Nice to see so many people recommending that Apple break EU law and not pay.

Ireland made a choice and joined the EU. Apple made a choice and based their money in an EU country. Now that the EU wants their taxes to be paid the first thought in everyone is “Ignore the law and the court ruling. Don’t pay”.

Such petulant people here that loves them all the benefits of a large government and illegal tax schemes, but when the bill comes do they dine and dash.

Retroactive taxes are pure robbery. There is no other word to describe them. That is not law, no matter how many courts say it is.

I don’t think there were new taxes passed.
It’s more like Apple flunked the audit.

The EU doesn’t want EU taxes paid because no company pays those. The EU wants to force Ireland to tax Apple at a higher rate than they did.

Very true, and quite right. This is crony capitalism, which I would hope everyone here opposes.

We never asked for, nor did we receive, any special deals.

If this is true, then what’s the problem? Surely this is a simple question of fact that can easily be determined. Did Apple make a deal with the Irish government, or did it simply take advantage of the Irish laws that apply to every business?

In other news, Al Gore a member of Apple’s board, recently announced a scientific study that proves paying taxes cause global warming.

Not sure I understand International law and taxation for all the ins and outs, but from what I’ve read there were tax abatements given to Apple by Ireland which is wrong under the EU’s code.
So it seems (if I’ve understood any of that stuff) once Apple pays the taxes to Ireland, Ireland will have to pay back the abatements costs to the EU. Which might be most if not all the 14+ bn?
Will the EU go after the other companies that have moved to Ireland to avoid taxes next? Apple wasn’t the only company to move there for the tax avoidance.

And in related news, local couple fined for racial discrimination after they move to a lower crime neighborhood.

Now that the Brits are on the way out, they should line up as many deals like this as possible and bring down the whole stinking fairy tale of EU. The same EU that’s protecting everyone from the depredations of Apple willingly sleeps with the unions and imposes an open door immigration policy that is destroying European culture. The elites running Europe don’t give a damn about anything except themselves. If Apple had paid a tenth that amount in bribes, there would be no problem.

I wonder how much is being ‘budgeted’ for Clinton Foundation ‘donations’ in corporate board rooms around the globe this fall.

The interesting thing is I’m pretty sure Apple was against Brexit. I wonder if this EU tax assessment makes them question that a bit?