Scarborough Suggests that Trump Has Crossed the Rubicon into ‘Fascism’

Scarborough Suggests that Trump Has Crossed the Rubicon into ‘Fascism’ 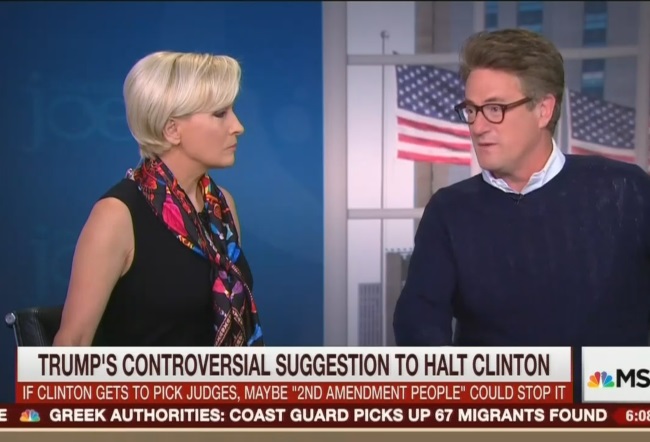 The opening segment of today’s Morning Joe was one long fusillade against Donald Trump in light of his remark yesterday that there is nothing people could do to stop a President Hillary from abolishing the Second Amendment, “although the Second Amendment people, maybe there is. I don’t know.”

The single harshest criticism came from Joe Scarborough, who suggested that Trump had “crossed the Rubicon” into fascism. Scarborough said that in the past he had rejected use of the words “fascist” or “fascism” in reference to Trump because he had never made “a call to violence.” Scarborough asserted that Trump’s comments yesterday were a suggestion that “Second Amendment people” kill Hillary Clinton or judges. Concluded Scarborough: “he crossed a lot of Rubicons yesterday.”

Note: yesterday, we praised Mark Halperin for mentioning on his With All Due Respect show instances in which Joe Biden had said Barack Obama would have a “problem” if he tried to take away Biden’s guns, and Hillary cited the assassination of RFK late in the 1968 primary as justification for her staying in the 2008 after it appeared she couldn’t win. But on the Morning Joe set, at least during the first half hour, not a peep out of Halperin about those parallels to Trump’s remarks.

JOE SCARBOROUGH: The word, Mika, that has been thrown around many times about Donald Trump over the course of the past year has been fascist, fascism. I always brushed it back because a key element in fascism was a call to violence. I said he never crossed that Rubicon. There was never a call to violence. There was never a call to an armed uprising. This is the suggestion, that if she’s elected President of the United States, the one thing that “Second Amendment people,” which is an insult to the millions and millions of people that fight to defend the Second Amendment, is to kill her, or to kill judges. That is, talk about, he crossed a lot of Rubicons yesterday.

Oh FFS. What is it about these clowns and the need to deliberately take EVERYTHING everyone who an opposing view to them literally.

Anyone with the critical ability to rub two brain cells together knows full well the Donald wasn’t inciting his followers to violence yet these idiots just blather on within their own little silos oblivious to what’s really happening out there.

It is not right wingers who are rioting at the drop of a hat nor do conservatives have a track record of rioting when they don’t get their way.

I’m more concerned about what lefty liberals will do when HRC comes in second. THAT is where we should all be watching out for trouble.

When anyone wants to attack Trump – they accuse him of doing things that Obama and Hillary have already done.

Example: Trump is dangerous and will start a war. But – in reality there is no way he could start as many wars or destabilize as many countries at Hillary and Obama have done.

These clowns were all for Trump during the primaries, then, as soon as Debbie emailed them their marching orders, they flipped 180 degrees.

This show is the TV version of Hill’s shills.

Dog-whistle BS taken to the extreme, by the only people capable of hearing the dog whistle. Trump exposes the media’s nakedness, intentionally and not, better than any person, politician or otherwise, in the last 50 years. If frauds like Rather think they can resurrect their reputations with scurrilous allegations whipped up out of rarified air, they are quite mistaken.

Putting aside any ambivalence about Trump, this pair is the very essence of overrated. Or mediocre. Or, when Howard Beal from Network wanted to know why he was chosen to relate the Universal Truth, the answer came, “Because you’re on television, dummy.”

Short of their morning show, does this pair have any other attainment(s) that might persuade you to listen to either of them, if you met, say, in your local supermarket?

No. Sitting in front of a TV camera does not confer either knowledge or experience. Let alone wisdom.

Joe was a congressman at one time, Republican no less. As for Mika, looks & a famous father are it.

They are a waste of valuable TV time, regardless.

Godwin’s Law will be validated early and often in this election cycle.

Godwin’s law (or Godwin’s rule of Nazi analogies)is an Internet adage asserting that “As an online discussion grows longer, the probability of a comparison involving Nazism or Hitler approaches that is, if an online discussion (regardless of topic or scope) goes on long enough, sooner or later someone will compare someone or something to Hitler or Nazism.

What is the origin of this definition? I’ve never heard GL described this way.

Google is your friend.

There’s also a corollary (can’t recall the name) that states eventually someone will attempt to hijack the thread by tying the subject to abortion.

The progressives have truly lost their minds!
Buckle up folks this is just the start of crazy.

There’s nothing exceptional in Trump’s very vague remark (“I don’t know” makes it about as vague as it can get, short of speaking in tongues).

Nor was there in Hillary’s. Can a candidate be assassinated? Obviously yes. Saying that doesn’t mean that she intends to do it, or will send someone else to do it, or even wants someone else to do it. It’s like saying that a person could be hit by lightning. Obviously true, and not in the least inflammatory. And if a candidate dies, then some other candidate will be substituted; an election isn’t canceled just because a candidate is hit by lighting. Hillary is the worst, and she can be attacked for her crimes; blame her for what she is and what she actually says, not for imaginary malfeasance.

Likewise with Trump. This rubbish is getting old. Pretend that he said something he didn’t, then attack him for (not) saying it. A pure “straw man” tactic, and not a very clever one, either.

Are these people just stupid? Perhaps they are, but more importantly, they’re desperate.

And, for the record: What they’re trying to impute to Trump isn’t remotely like any form of historical fascism. The violence he’s not inciting is hardly adequate; one ingredient does not a political movement make. That’s like saying that anything with a glove compartment is a car. Just plain stupid.

Nothing exceptional – but the Press needed something to get Hillary and the Jihadi’s Father off the front page.

True. And Trump was more than willing to give her an out. As always.

No, you ignorant sub moron, the “media” does what it always does, the bidding of leftists like you. In other words, they just make shit up.

Regardless. The media seems to be able to work against Trump really well.

The only pertinent question about Morning Joe ;
Would you have carnal relations with Mika?
In my case I don’t know. Since I don’t have cable, I’ve never seen the show. I can say this. Joe Scarborough is a putz. Even Joe has to know that even though he must be blind as a bat.
He damned sure has no clue what fascism is.

Apparently Joe would. They are rumored to be an item.

Joe’s about 5 months late to the “fascism” dogpile.

Yeah, it’s not a new observation. Made by Thomas Sowell among others.

If Trump can jump a Jeep at his age, I say power to him. I didn’t think Jeep was still making that model though.

Only people who conflate abortion rites and human rights would think that the Second Amendment justifies the former. The Second Amendment does not entail people to commit abortion for trivial causes including social justice adventurism and to terminate unwanted or inconvenient human lives.

The abortion chambers and Sanger’s clinics loom over the Pro-Choice Church past, present, and future.

The Tell-Tale Hearts beat ever louder.

Doubt the “outraged” actually believe even one word they are saying.

If you are outraged by this, you are not a true Trump supporter. A certain website unfortunately named after its late founder insists that Trump’s is a national populist movement:
https://twitter.com/ewerickson/status/763411255768051713
They should know.

You had Erickson send you a pair of his soiled undies, didn’t you?

This is the best-worded argument I’ve heard today.