Additionally, Rio’s Olympic pools are turning green and “smell like a fart”. 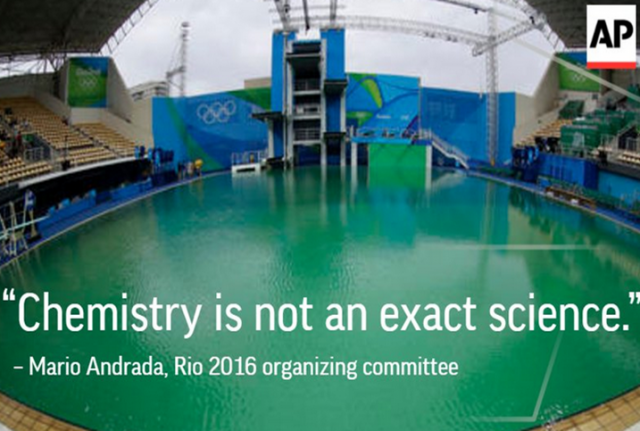 Before the Rio Olympics began, I noted that scientists found dangerous drug-resistant “super bacteria” off beaches in Rio de Janeiro and in a lagoon where rowing and canoe athletes will compete. This is in addition to bodies, sewage, and other detritus floating off the coast of Brazil.

A Belgian sailor who won a bronze medal at the 2012 Olympics has become the first person to fall sick after racing on Rio’s polluted Guanabara Bay.

Evi Van Acker reported feeling sick after Wednesday’s races, the governing body World Sailing said. Her poor performances have put her at risk of missing out on a medal in the Laser Radial class.

…Van Acker was evaluated by the chief medical officer after her races Wednesday and evaluated further by the Belgian medical team that night, World Sailing spokesman Darryl Seibel said. Seibel added that this appears to be an isolated case and Van Acker is the only sailor who has reported feeling ill in the opening days of the regatta.

However, it isn’t only the natural bodies of water that are having problems. Rio’s Olympic pools are turning green.

The green water in the Rio Olympic diving pool isn’t turning blue quite yet. Oh and it smells now, too. https://t.co/NkhNvG9xjo

Olympic officials close, then reopen diving pool that “smells like a fart” https://t.co/oXa9wVXGV4 via @HuffPostSports

Mario Andrada, chief spokesman for the local organizing committee, stressed that the pool was safe for competition, clearing the way for the preliminaries of women’s 3-meter springboard.

He conceded that some athletes had been bothered by the water, but said that was a result of efforts to clean the pool.

“We reiterate what we have been saying all along — the water does not offer any threat to the health of the athletes,” he said. “In the first day of this water situation, one or two athletes complained about their eyes being itchy. This was a result that the first reaction when we saw the water turning green was to use one of the chemicals — chlorine — that is very common in swimming pools. We reduced immediately the quantity. We retested the water and it was totally within the parameters.”

Andrada said officials were caught off guard by the pool’s deteriorating condition.

“Chemistry is not an exact science,” he said. “Some things, as you can see, went longer than expected.”

As a chemist, I assert that when properly done, chemistry is an exact science. But, I digress.

The condition of the pools is apparently the result of a series of mistakes.

“When we went to fix the green, there was a discussion about the best chemicals. We can’t use too much chemicals in the water because athletes are training in it,” Andrada said. “We certainly could have done better in the beginning to prevent the water from turning green. Once it turned green, we again made another bit of a mistake.”

At least the American teams are doing well…especially Maryland! More than half of the gold medals won by the United States have been because of the efforts of athletes with ties to that state!

Here’s to hoping our athletes remain healthy and safe for the remainder of the Olympics.

“Chemistry is not an exact science,” he said.

And, it’s not a new science.

As things go, chemistry comes closer to being an “exact science” than most human endeavors. Sanitation is less exact, but what works is well known and proven examples abound in the world, many known through the science of chemistry. Economics may be the “dismal” science but much is known about variations that are more or less successful there, as well. These, combined with the very au-courant global practice of choosing your own personal variations of honesty and integrity have all come together in Rio to provide a shining example of failure at every level to choose the best – even just better would be have been an improvement – examples of what is known about how to do things. Heck, the consequences of their choices are so bad it is straining the capabilities of even NBC, an olympic-class denier and obfuscator, to hide them and their consequences. But then, look on the bright side – the games could be in Caracas.

Truthfully, chemistry is as an exact science as any of which we know.

Stoichiometry is precise, definable, and scientifically predicable as anything ever was.

Right you are, Mr. Ragspierre. You probably share some views of the universe that a medieval, Christian, peasant or scientist would have. The universe was created by a Creator who laid down rules for it’s governance. This is why we can have astronomy tables to precisely describe where those celestial orbs are going to be at any given time. We can trust our lives to those navigational tables. We know with certitude that certain procedures yield certain results, and so we can trust our calendars for planting and our food preservation techniques for safe food. Cause and effect is a real and reliable concept. Other civilizations didn’t approach math and science as tools for us to better understand the Creator by understanding His creation. This is why Western science, based in Western culture, owes so much to the Church and this understanding of science. This is also why Western science is so dominating. Too many want to divorce science from this connection. However, the way the universe is set up, as long as scientist “believe” that specific effects are the result of identifiable causes, they can still do their science and ignore God. This works with or without a belief in God, but not without belief in effects from causes.

I imagine this talk about ‘exact’ and ‘inexact’ sciences is not a conversation the progs will want to have. Their ‘climate science’ will have the entire first world running around with green hair, metaphorically speaking.

I didn’t get the Climate Advocate memo (must have ended up in Spam folder). Is this what is meant by going green?

“As a chemist, I assert that when properly done, chemistry is an exact science. But, I digress.”

ROFL! I guess I am suffering from scientific privilege.

I admit to being very surprised at the bright hue.

Could they have started with polluted water? Which would mean adding the usual stuff doesn’t get the usual results. The water was probably foul, at a low level, to start with, and pool chemicals, and missing pool chemicals, just made things worse.

It’s the same crap story we’ve gotten from the E.P.A. after they knowingly breeched the Gold King mine, & released an admitted (it’s more) 3 million gallons of heavy metals laced water down the Animus, San Juan river systems into Colorado, New Mexico, Utah, Arizona ; to include the Ute Mtn.,& Navaho Nation.

An aside to Ragsdale. This was one of my other operations as it progressed. I sent you copies of some of my correspondence at the time. You responded.with your usual mockery & invective. Which is in part why I hold you in such contempt.

The world is about more than you & your petty self interests.

You are just FLUCKING NUTS.

The Gold King mine breech did occur. It was all over the news.
I’ve already told you you won’t pull me into your double dealt, game of cards.
I’ve also pointed out on several occasions you can dish it out but you can’t take it.
My phone needs recharging.
Goodbye.

It’s well-known in manufacturing circles that Brazil is one of the world’s capitals for industrial pollution. There are (or at least were, I’m not really up on the latest government fiats) essentially no regulations regarding waste disposal; the most awful stuff can be dumped out in the streets, and routinely is.

This is deliberate policy. The intention was to avoid burdening industry with expensive things like proper waste disposal. Lowered costs of production would give Brazilian manufacturers a competitive edge over factories in cleaner countries, like, say, Singapore. And this would help boost Brazil into a strong position in the world’s manufacturing economy.

It wasn’t an entirely daffy plan; China has done the same, and managed to make something of it. But it didn’t really work the same magic in Brazil. Severe protectionism didn’t work, either; Brazil remains a manufacturing backwater. But it does produce some of the best pollution in the world.

None of this is terribly mysterious, so I have to assume that there were, ahhh, political factor$ involved in the country’s selection as Olympic host.

It was a Greek idea. Why not have the games at a site in Greece every time and not use the games to reward the country offering the best bribe. I forgot the corruption must continue. Never mind.

Chemistry is not an exact science. But ‘global warming’ is.

Mario is a democrat in the making.

anyway, yes, it is an exact science.

Chemistry, not an exact science? HCl + NaOH in precisely equal amounts renders NaCl + H2O … salt water. It’s drinkable. If you mix them in any less than exact quantities, then try to drink it, you’ll poison your self with acid or lye burns to your esophagus.

That begs the question: how much less exact is Brazilian chemistry than the chemistry in the rest of the world?

Algae is more difficult to control when it’s hot (like 92F here in FL) than when it’s cool (like 70F in Rio).

An Olympic pool is a lot of chemistry.

Once you let a pool go “south”, it’s difficult to fix.

BTW, isn’t it “hemisphereism” to call this the Summer Olympics when it’s winter in Brazil?

““Chemistry is not an exact science…””

Nothing is “exact” in the land of the left. It’s all malleable to the cause of the day.

And the “cause” is always extracting money from someone else.

There was too much organic matter and nitrates in the water and there was an algae bloom. It is a common event, the algae can be killed by small amounts copper sulfate but then it turns excrement brown and probably smells like it looks. The thing is use treated water to begin with.