Politicians have demanded the event not take place. 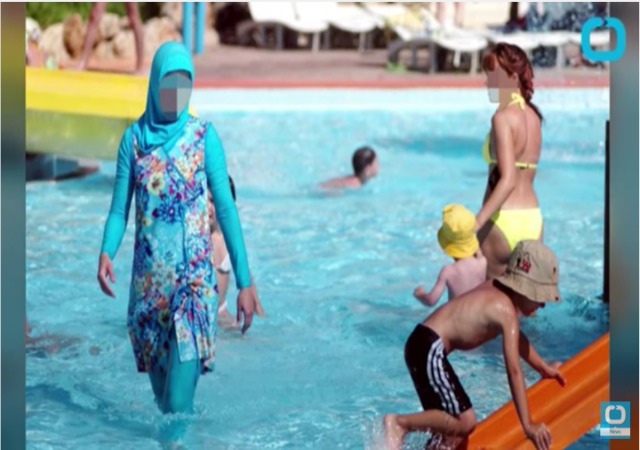 A slew of terrorist attacks have left France on edge and one town boiled over when a local park announced a burkini only day for Muslim women.

Some people aren't happy about a burkini-only day at a French water park https://t.co/uUI6wBx5Iv pic.twitter.com/v9Yklepi4F

The group Smile 13, “a socio-cultural, sport, and self-help association for women and chidren,” reserved the pool for the day and said they will allow the burkini and swimming hijab, which laws usually forbid in public pools.

Some lawyers believe “there may not be grounds for prohibiting the event because Speedwater Park, near Marseilles, has been privatised for the day by Smile 13.”

But Mayor Michel Amiel told local media the event left him “shocked and angry.” he said:

“This is communitarianism, pure and simple,” Amiel told Le Parisien, adding that he was looking at banning the event as a “threat to public order”.

Politicians have still asked that someone stop the event:

Valérie Boyer, a centre-right opposition MP, said: “It is a question of the dignity of women, of respect of our fundamental values. The battle of the veil is a visible sign of fundamentalists wanting to mark their territory.”

In 2014, the European Union upheld France’s law that bans the burqa and niqab. They did not think the law violated the European Convention on Human Rights.

But like I said it is understandable why the public do not want this to happen. Two ISIS terrorists slit the throat of Father Jacques Hamel in his church in northern France. Another terrorist drove a truck through a crowd in Nice, killing over 80 people. Last November, terrorists attacked six parts of Paris, killing over 100 people. There was also the attack on satire magazine Charlie Hebdo. I’m probably missing a few because there have been so many. The police have also foiled a few attacks before they took off.

Private or not that counts as appeasement of the enemy. Obviously a push on the local community to accept a barbaric peoples rules.

It always starts with accommodation of the Muslim women. Always. That is the strategy. It establishes a precedent.

So, the moral of the story is, if you want to escape the Left’s baby hunts, you need to convert to Islam. Would joining the Pro-Choice Church suffice?

Is a baby trial mandatory to receive the Church’s protection?

And they didn’t even need tanks to conquer France.

The French are running no matter what.

I hate to break it you, but we’re folding just as meekly as the French. We also have these sorts of events. Particularly on college campuses. Which might at first seem ironic. While universities public and private are eliminating sex-specific bathrooms and locker rooms for everyone else, insisting biology doesn’t matter but only how you feel about yourself on any given day, Muslims demand special times for things like Muslim-only swim times at pools and work-out times at gyms. And they demand those hours be segregated by sex.

There’s nothing ironic about this. Just as Islam itself is not a religion but a totalitarian political ideology, Muslim Brotherhood front groups such as CAIR are not civil rights groups but Muslim supremacists groups. They aren’t demanding equal rights for Islam but that in accordance with Islamic political ideology special, superior rights for Muslims over all other people. Just as it is in every country with Muslim majorities that implement Sharia law.

Not even white supremacists demanded their own bus, just that Rosa Parks sit in the back of the bus. Muslims are demanding their own, kuffar-free bus.

One of Obama’s first acts as President was to invite the head of the Organization of Islamic Cooperation, an organization of 57 Muslim states plus Palestine, to the White House. Obama was eager to agree to all their demands. This included agreeing to help the OIC in its decades long effort to criminalize accurate truthful speech about Islam as “Islamophobia.”

Essentially this was an effort to force Sharia blasphemy laws on non-Muslim countries. All past administrations vetoed this push due to the obvious conflict with the First Amendment. But since the Obama administration is hell bent on shredding the Constitution they could give a rat’s ass about the First Amendment. Hillary Clinton as Obama’s SecState signed an agreement with the OIC in 2011 to help them in this effort, and shortly thereafter the OIC’s resolution passed in the UN. It’s non-binding at the moment, although since it is a person’s words that turn an ordinary crime into a hate crime we’re only a couple of justices away from a ruling stating that the fabrication called hate speech is not protected by the First Amendment.

But what Obama can do is make that resolution binding on federal law enforcement, intelligence, national security, and foreign policy agencies. This is why Obama, Loretta Lynch, et al refuse to identify the most obvious of motives when some Muslim shouting Allahu Akbar kills in the name of Islam. Even if that Muslim leaves a video detailing exactly their motive, citing chapter and verse from the Quran or specific hadiths from the Sunnah. Because recall that “Islamophobia” is not just uninformed bigotry but truthful, accurate speech that casts Islam, allah, or Muhammad in a negative light.

Recall that after Benghazi Obama went before the UN and said “The future must not belong to those who slander the prophet of Islam.” Many informed people are familiar with the Islamic concept of taqqiyah, lying to advance the cause of Islam or far the safety of Muslims in non-Muslim lands. But that’s just one form of lying and deceit authorized by Islam. Less familiar is tauriyah, deliberately and deceptively using words that will give the target audience one impression when the speaker means something entirely different.

Slander to a western audience involves telling falsehoods about someone. In all schools of Sharia slander has nothing to do with lying or falsehoods. Slander is saying something that someone does not want known even if it is the truth.

Obama knew perfectly well what he was saying. That the future must not belong to those who speak critically and negatively about Muhammand (and by extension allah and Islam) even if what the speaker is saying is 100% true.

Hence the government will never figure out a motive when a Muslim fulfills his or her religious obligation to wage holy war against the unbelievers. That’s long been the OIC’s goal, even to the extent of criminalizing counter terrorism intelligence collection and analysis as “Islamophobia,” and it is now US policy as well.

So let’s not point the finger at France and laugh. At least Hollande will still speak about the connection of Islam to terrorism while our President insists on editing recordings so any such comments are deleted.

Sort of reminds me of an old Wendy’s commercial: SOVIET FASHION SHOW
https://www.youtube.com/watch?v=5CaMUfxVJVQ

I would have crashed the party wearing one of those gay Euro banana hammocks with my hairy nuts spilling out, both on one side. Because diversity.

Hitler wishes his takedown of Europe had been this easy.