Four times the size of California, off the coast of Hawaii. 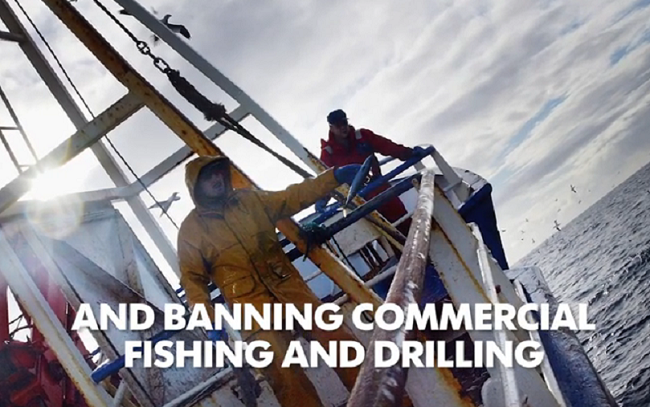 In a move that is being hailed as cementing his conservation legacy, Obama has, with the stroke of his pen, expanded a national marine monument off the coast of Hawaii to over 582,578 square miles.  This move will, however, destroy commercial fishing and potential drilling and mineral collection in a vast expanse of our waters.

President Obama on Friday morning created a massive national monument off the coast of his native Hawaii, the world’s largest protected area.

The declaration expands more than threefold the size of the Papahānaumokuāke Marine National Monument, surrounding the outlying northwestern Hawaiian islands.

The move in Obama’s final months further cements his legacy of using unilateral executive authority to protect far more land and water as national monuments than any other president.

“The expansion provides critical protections for more than 7,000 marine species, including whales and sea turtles listed under the Endangered Species Act and the longest-living marine species in the world — black coral, which have been found to live longer than 4,500 years,” the White House said early Friday morning.

To give some perspective on the size of the newly expanded monument, Pew Charitable Trust explains that the newly protected area is almost four times the size of California.

Some Hawaiian Democrats are thrilled with the move.

The boundaries for the protected area, along with rules allowing some recreational fishing, research and education there, were proposed by Sen. Brian Schatz (D-Hawaii).

“This is one of the most important actions an American president has ever taken for the health of the oceans,” Schatz said in a statement. “Expanding Papahanaumokuakea will replenish stocks of ‘ahi, promote biodiversity, fight climate change, and give a greater voice to Native Hawaiians in managing this resource.”

“President Obama’s efforts to enhance protections for our ocean ecosystem will help to combat climate change, preserve biodiversity, and honor cultural traditions,” she said. “As part of his announcement, I appreciate the President’s recognition of the importance of commercial fishing to Hawaii’s way of life and our shared goal of supporting Hawaii’s sustainable pelagic fisheries.”

Touting the move as not only a means of protecting marine life, the White House explains that this will also provide scientists a place to study the “impact of climate change.”

Not everyone is thrilled, however, because this move will effectively end all commercial and limit recreational fishing in the vast expanse of ocean, as well as any mineral or oil, etc. collection or extraction.

“The expansion provides critical protections for more than 7,000 marine species … [and] will allow scientists to monitor and explore the impacts of climate change on these fragile ecosystems,” the White House said in a statement, citing the support of Sen. Brian Schatz and “prominent Native Hawaiian leaders.”

But the decision drew sharp criticism from the fishing industry and even fellow Democrats, as it will drastically expand the area where commercial fishing and drilling is banned.

Former Democratic Gov. George Ariyoshi said at a rally last month that it came down to the question of who actually owned the ocean.

“The ocean belongs to us,” Ariyoshi reportedly said. “We ought to be the ones who decide what kind of use to make of the ocean.”

Representatives from the fishing industry warn the move will increase prices and imports, The Honolulu Star Advertiser reported. All commercial extraction activities will be prohibited within the area, though non-commercial fishing is allowed by permit.

Regarding the many touting this as an important contribution to Obama’s legacy, the chairman of the Western Pacific Regional Fishery Management Council says it serves Obama’s “political legacy” rather than one based in conservation.

The regional council that manages U.S. waters in the Pacific Islands said the decision “serves a political legacy” rather than a conservation benefit.

“Closing 60 percent of Hawaii’s waters to commercial fishing, when science is telling us that it will not lead to more productive local fisheries, makes no sense,” said Edwin Ebiusi Jr., chairman of the Western Pacific Regional Fishery Management Council. “Today is a sad day in the history of Hawaii’s fisheries and a negative blow to our local food security.”

With this move, Fox News reports that Obama “will have created or expanded 26 national monuments. The administration said Obama has protected more acreage through national monument designations than any other president.”

As with the designation of “the world’s largest marine sanctuary,” Obama’s creation, two days earlier, of a massive monument in the Maine woods was met with resistance and concerns about American jobs and local economies.

The White House said the monument will protect 87,500 acres and will bolster the forest’s resilience against the impact of climate change.

The monument’s creation, though, was opposed by state lawmakers and critics who warn it will hinder efforts to rebuild a forest-based economy in the region.

“President Obama is once again taking unilateral action against the will of the people, this time the citizens of rural Maine,” Republican Gov. Paul LePage said. “The Legislature passed a resolution opposing a National Monument in the North Woods, members of Maine’s Congressional delegation opposed it and local citizens voted against it repeatedly.”

The move also was opposed by Sen. Susan Collins and Rep. Bruce Poliquin, both Republicans.

“Our local job creators—not Washington bureaucrats—know best how to use our working forests and provide proper access for industries to create more jobs including those in the outdoor recreation businesses, like snowmobiling, hunting, rafting, camping and so on,” Poliquin said in a statement.

Saving the planet and studying “climate change” by killing jobs and local economies.  Some legacy.

… and the skanks that voted for him. Twice!!

Another thumb in our eye and a great big “FU, reality” from Barracula on his way out the door.

I continue to believe that we will see the worst of obama’s efforts to destroy our once-great country in the 2 1/2 months after this November’s election.
For more than 7 1/2 years we have watched obama lawlessly aggrandize executive power, and we have see congress merrily go along, occasionally strutting and fretting, but accomplishing nothing. Perhaps worse, we have seen the judiciary as a whole, emboldened by chief-traitor John Roberts, capitulate to the omnipotent obama when America’s future was in the balance. Once Hillary is elected and appoints additional compliant justices to SCOTUS there will be no stopping the leviathan.

Schatz said in a statement. “Expanding Papahanaumokuakea will […] give a greater voice to Native Hawaiians in managing this resource.”

So, having the Federal Government take over their resources gives locals more control over those resources.

I have to yoga, or meditation, or something, in order not to go and bitch slap these idiots.

Hey, DoubleSpeak is their native tongue!

They might want to ask the Native Americans how the BIA and BLM have helped keep them in the poor house.

Can these executive orders be undone by a future president?

Any EO, Executive Memorandum or Agreement can be cancelled(right term?) by the next President.
IMHO the first thing a newly sworn President should do is revue all Orders, Memos and Agreements getting rid of any that are questionable or not in the best interests of the Country.

No. The Antiquities Act authorizes the president to declare national monuments, but it doesn’t say a word about undeclaring them.

“Oh, East is East and West is West, and never the twain shall meet,
Till Earth and Sky stand presently at God’s great Judgment Seat;
But there is neither East nor West, Border, nor Breed, nor Birth,
When two strong men stand face to face, though they come from the ends of the earth!”

In reference to the Katahdin Woods national monument, the ‘strong men’ as heroes implied in Kipling’s ballad no longer pertains. The eastern states, now jealous of the federal control over western lands, have set about to surrender control over their lives and homes.

Oh Kipling, we hardly know you.

“The expansion provides critical protections for more than 7,000 marine species, including … the longest-living marine species in the world — black coral …”

And that, right there, is the real motive behind Obama’s latest ‘phone and pen’ fiat ruling! Black Lives Matter, even if it is at the expense of Pacific Islander lives.

There is not a lot of recreational fishing in this area, but there are a lot of commercial fishing. Having a preserve here is actually a good idea. A lot of long liners fish these waters and taking some pressure off them will help replenish fish elsewhere around Hawaii.

I must be missing something. Everything over 200 miles from shore is international waters, right?

Yes. And now everything that is within that limit, and west of 163°, is in the park.

Please do not repeat the lib talking points that this is good for the fish. Please do not fall for it. I can probably come up with a hundred different ways how this will not help the fish. And later the people who brought you Detroit and Chicago and ISIS, who bitch about how NOBODY could have foreseen the UNFORESEEABLE consequences will demand job security for life because they say only they can fix the their own mess.

The good news is that any future President can rescind this executive order. Probably, though, Hillary will not.

No, they can’t. Not even 0bama can rescind it. The Antiquities Act doesn’t have any provision for undeclaring national monuments. Presumably it would take an act of Congress.