Judicial Watch will receive the documents and hope to release them by early October. 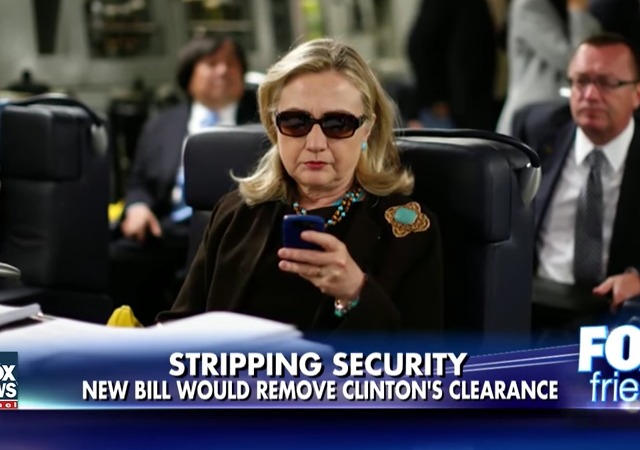 Whoops! Judicial Watch’s investigation into the Hillary Clinton email scandal continues as a federal judge told the State Department to expedite the release of 15,000 emails the FBI discovered that her attorneys did not turn over.

The watchdog group has kept a close eye on the scandal, at first questioning Clinton aide Huma Abedin’s jobs before she went to the State Department. It unraveled to show that Hillary used an unsecure server and that many of her foundation’s donors asked her for special favors when she served as Secretary of State.

The State Department attorney would not tell Judge James Boasberg exactly how many emails “Disc 1” holds, which led the judge to tell them to release them as soon as possible:

“It looks like the State Department is trying to slow-roll the release of the records,” Judicial Watch President Tom Fitton said in an interview Monday morning. “They’ve had them for at least a month, and we still don’t know when we’re going to get them.”

Judicial Watch hopes to release the documents in early October.

The disc contains emails Hillary “sent or received during her tenure as secretary of state, and they were not among the 55,000 documents turned over by her lawyers last year.”

The announcement comes days after Judge Emmet G. Sullivan of Federal District Court in Washington put Judicial Watch a step closer by telling Hillary she must provide written testimony under oath, also known as interrogatories, about her private email server in connection to Judicial Watch’s lawsuit.

Judicial Watch kept their investigation going after FBI James Comey said he would not recommend the Depart of Justice press charges against Hillary, even though he admitted she and her staff were “extremely careless” using her private server.

“You’re A-Gonna Not Believe This, But It Could Be That the Purely Personal Emails Hillary Deleted Were Work-Related”

“The dog ate my emails?”

I sure wish this Mormon could whip out the pimp hand, like us Catholics.

Full disclosure: I am a JW financial supporter, but my first donation is to LI.

I have to almost laugh, every news outlet always starts off reports on JW as “a conservative group”.
Liberal code for don’t believe what they say.

The sound of the looming fall for Hellary is …

[Hey Branco, how about an alligator with a clock chasing Capt. Hellary. Some things “Neverland” go away.]

Look at her smug s**t eating face. I can’t believe it.

Not that anyone should care, but my 1818 Napolean heavy cavalry pallasch is, as one expects, 200 and delivering 200 year old babies.

As far as the good Lord tells us to trust in swords.

Now my one remaining task in life is to pass it on.

1854 heavy four bar hilt. She was a rehilted Napoleon.

In the photo at the top, the stone in the center of that brooch looks like a bar of motel soap.

“Clinton said that she had “absolute confidence” that all of her emails that could be “in any way” connected to her work was in the possession of the State Department.”

Crooked Hillary has a severe mental issue. She is a compulsive liar! The woman has been on a lying spree for the last year when speaking about e-mails and the illegal server in her home.

Bernie is right — much ado about nothing. Why are folks still hung up on these “damn emails” — or similarly contrived issues — when we have real problems facing our nation.