Has the Democrat party become an anti-law enforcement party? 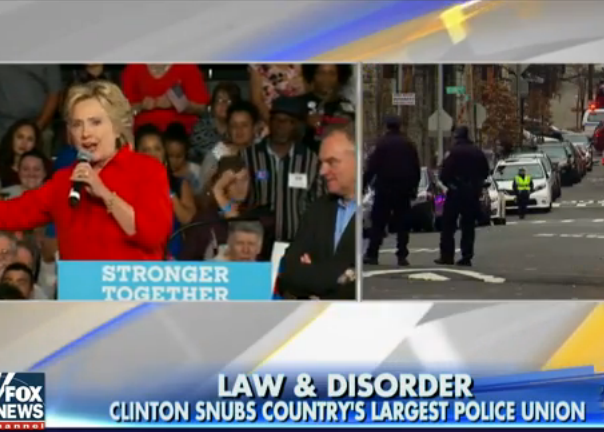 Hillary Clinton’s relationship with law enforcement, like her involvement with any issue, has evolved over time. Sometimes over night.

There are reports that Hillary, as First Lady, had little respect for—and was even verbally abusive toward—the Secret Service agents assigned to protect her . . . with their lives if necessary.  Apparently, she also gave these men the impression that her dislike extended beyond the Secret Service to “law enforcement and the military.”

After receiving harsh criticism from the left when she made the “mistake” of declaring that “all lives matter,”  Hillary started courting the Black Lives Matter movement, attempting to ingratiate herself and secure their support for her campaign.

Against this backdrop and when faced with the decision of whether or not to seek the endorsement of the National Fraternal Order of Police, she declined to submit to the process.  A move seen as a snub by the police union.

Top officials at the biggest police union in the country are upset with Hillary Clinton, saying she snubbed them.

The leader of the National Fraternal Order of Police told The Hill that the Democrat sent a signal through her staff that she wouldn’t be seeking the union’s endorsement.

“It sends a powerful message. To be honest with you, I was disappointed and shocked,” said Chuck Canterbury, the president of the National Fraternal Order of Police.

“You would think with law enforcement issues so much in the news that even if she had disagreements with our positions, that she would’ve been willing to say that.”

Yes, you would think that someone running for the highest office in the land could bring herself to seek the support of a major police union, particularly in light of the far left and BLM backlash against police and the high number of police officers murdered this year alone.

You would think.  But you’d be wrong.

Asked about the decision not to seek the police union’s endorsement, Clinton spokesman Jesse Ferguson said, “Throughout her career, Hillary Clinton has been committed to our law enforcement officers.”

“As she said from the beginning of her campaign, across the country, police officers are out there every day inspiring trust and confidence, honorably doing their duty, putting themselves on the line to save lives.

“She believes we must work together to build on what’s working and to build the bonds of trust between police and the communities they serve — because we are stronger together,” Ferguson added.

“Hillary and her team have engaged law enforcement throughout the campaign to listen to ideas and solutions, and she will continue to do so as president.”

For his own part, Canterbury finds himself unable to answer whether or not Hillary respects police.

“You can quote me on that,” he added.

. . . .  “We are an organization that tries to be bipartisan and works with members of either party wherever we have common ground.”

“And the idea that a presidential candidate would not want to at least talk to an organization that represents almost half of the police officers in the United States and is a thought leader in the public sphere … is very disappointing.”

It would seem that Rudy Giuliani may be on to something when he observes that the “Democratic Party has become an anti-law enforcement party.”

“Has the Democrat party become an anti-law enforcement party?”

Is this a trick question?

Law enforcement for a Democrat was at its best with the Stasi. The Democrats even used that selective, lawless, and brutal model in the days when the KKK was active, albeit more local policing at the time. Now, it needs to be centralized (DOJ is working on that) so the ruling class can control it.

The descendants of those democrats are now republicans. So please drop that canard. It is stupid and shows that you have no real argument.

BTW, ever heard of cointelpro? That was STASI like and they weren’t going after republicans.

Don’t you guys have a real argument. If you like, I can write them for a fee. There is good money in being a conservative apologist, rationalist or think tank member.

They were for them before they were against them.

In other news, Democrats are now the pro-military party, and progressive wars, too. They were always the latter.

So damned selective. First, … Well, the police union gets it, got it.

We are also pro-police. But when it is impossible for the rotten apples to be removed, we get a little angry. There aren’t ANY bad cops? None whatsoever?

As long as the police unions keep protecting the bad cops, someone has to speak up. You are pro-life. What do you think about the couple of hundred who walked off death row because they were innocent. They weren’t released on technicalities. They were flat out innocent. Do they have a right to life?

How come the Innocence Project keeps finding convicts to exonerate? False witnesses, jailhouse snitches, withheld evidence, bad identifications – what do you care? You are righteous.

Hillary figured out real quick. There are more BLM voters (since the vote multiple times) than police union voters…so she threw them under the bus.

And THAT is exactly it : principles disregarded and purely counting vote #’s

She never had any principles that needed discarding. Her one and only principle has always been “What’s in it for me?”

Hillary’s utter contempt and disdain for anybody in the SS and military has been well documented for decades. It is a shock to exactly no one that contempt extends to the police.

How the idiots in the police union can think for one second that the Democrats care about them after the BLM bullshit in recent years literally hurts my brain.

It’s such an odd phenomenon, Olinser. Traditional Democrats simply don’t seem to realize that the Democrat party they thought they were a part of is no more. I saw this in 2010 when I was doing what I could to help Scott Brown win in Massachusetts. He had this amazing “I’m Scott Brown, and I drive a truck” thing going on that really appealed to a lot of MA voters (outside Boston and the Berkshires, anyway), and people would be drawn to that. Yet they’d still cling to that old Democrat party and feel almost obligated to vote for the elitist (and quite evil) Martha Coakley simply because she was a (D). A snob who made it abundantly clear that she thought herself far superior to the great unwashed masses was being supported out of habit or nostalgia or apathy or whatever over “one of them.” It was perplexing.

That old Democrat party wasn’t that great, either, but at least they loved America, loathed communism, and understood equal justice and the rule of law. These are the same things that many people who identify with or as a Democrat still believe. They believe in America, they believe we are an exceptional nation, they believe in the American Dream. They are not, in other words, a good fit for the current Democrat party which has moved to the extreme, even radical, left. Many of them do see this (that is why Independents in Massachusetts outnumber Democrats and Republicans combined.). With the rest, logic and facts didn’t work, so I started asking them which of the two they thought was more like JFK, a beloved figure in MA. That did the trick! 😉

Sorry to go off on a tangent, but this is something that really interests me. What keeps Democrat voters voting Democrat even when they know they are voting for someone who shares none of their values or concerns? It’s a simple question, but the answer is complicated to the point that it may be unknowable from our current vantage point.

type 2, government support for the insider, I.E. unions and globalists

type 3, the idiots that truly believe democrats are for the middle class and republicans for slavery

Nothing prevents one from being all 3…

Don’t forget demonization of Republicans. I think many Democrats will vote for truly awful candidates purely because they have internalized the propaganda that Republicans hate Blacks, hate Gays, hate workers, suppress women, and want to poison the Earth (or let it burn in the latest iteration).

White House had a statement on their site that obama has pardoned, paroled or otherwise reduced the sentences of more criminals than the last 9 presidents COMBINED.
His opposition to guns fades away when he’s doing the criminals these favors. The biggest of criminals was given a pass by the fbi.
I’ve said many times before, the democrats are the party of criminals. Their core constituency.

Has the Democrat party become an anti-law enforcement party?

Do bears shit in the woods?

OnlyRightDissentAllowed in reply to Senator Bluto Blutarsky. | August 9, 2016 at 8:10 am

Has the republican party cynically used the issue and closed ranks with police unions that defend all cops – good and bad? Do bears shit in the woods?

Why is everyone surprised. Hillary is known for her cop outs!

I never expected her to seek our endorsement. Nor would I want the leadership of the FOP to offer it. She has repeatedly said that cops are systemically racist and abusive. She can go to hell for all I care. And calling the FOP a union is a bit deceptive. Most of the officers who are dues paying members do so only for legal coverage for the possibility that we get sued (I’ve been threatened with it many times, but they never seem to follow through) or our agency decides to throw us under the bus and we have to fight for our job/freedom. We don’t receive any direct support in the way that unions normally support their members, such as fighting for better wages and benefits. They are, however, a decent lobbying group with politicians.

She has enjoyed Secret Service protection for over 24 years now…

Those SS agents have been very fortunate to have been assigned to the royal genius Hillary! Just ask her.

As required by law. Should there be an exception because you don’t like her?

I know one, maybe more than one, wrote a book. I am shocked, shocked that she once threw a vase.