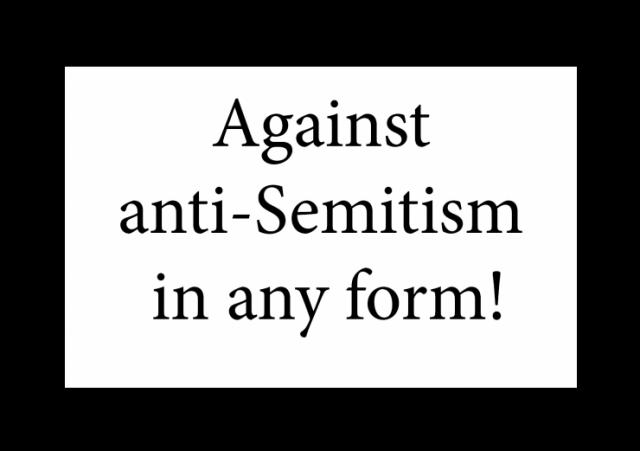 A few days ago, we covered how in early August 2016 the Student Council at Leipzig University in Germany passed a resolution taking a strong stand against calls to boycott Israel, declaring them to be anti-Semitic, READ: German university student council resolution declaring BDS anti-Semitic:

The Student Council condemns anti-Semitic boycott campaigns such as the Boycott, Divestment and Sanctions [BDS] and stands against the execution, participation in, and promotion of such campaigns and events at the University of Leipzig.

Therefore, the Student Council will not support BDS Campaign or settings (events, exhibitions, demonstrations etc.) in which BDS Movement is involved.

We consider international cooperation vital for the Academics. As a Student Council we stand against anti-Semitic measures such as disinviting of Israeli academicians from conferences in the context of the boycott campaign, and [council will] publicise whenever it happens — thereby contributing to the clarification of the matter and preventing such an occurrence.

The student council has produced a chronicle of its rejection of BDS (pdf.) which includes a citation to my translation of the resolution: 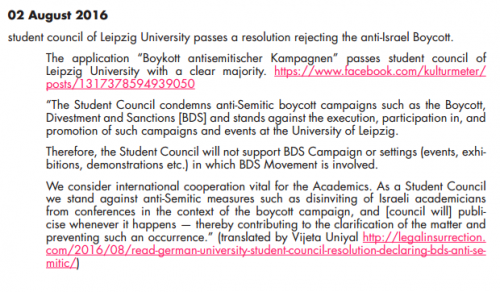 The student council has just reiterated its earlier stand of vowing to fight all forms of anti-Israel boycotts on the campus, including the BDS Movement, calling for the “boycott of anti-Semitic campaigns” in a newly released statement.

The statement issued by the ‘Student Parliament’ of the Cultural Studies Department at the University of Leipzig, dated August 22, 2016, was posted at the Students Council’s website (h/t Benjamin Weinthal)[author’s translation]:

On August 2, 2016 the Student Council at the University of Leipzig passed a resolution taking a clear stand against anti-Semitic campaigns such as Boycott, Divestment and Sanctions (BDS). The resolution “Boycott Anti-Semitic Campaigns”, table by us in the general meeting of the Students Consul and backed by JuSo [Social Democratic] student group, is directed against the carrying out, participation in, and promoting of anti-Semitic boycott campaigns. In recent years, anti-Semitic boycott campaigns have gained tremendous momentum targeting all Israelis as well as Jews.

What triggered the motion was the invitation of BDS activist and anthropologist Lori Allen in June 32, 2016 at the Global and European Studies Institute, University of Leipzig. The event in the series “Druckfrisch” [A book reading event by authors, literally meaning; freshly printed], Allen not only used the event to present her book, but to aggressively promote BDS. The Alliance Against Anti-Semitism and Anti-Zionism Leipzig [German acronym: BAAL] criticised the event at its onset, which they publicised in a leaflet. [Link to the original leaflet in German as PDF-file]

Students Council with its resolution although does takes a clear stand against anti-Semitism in all its forms and offers a clear framework for actions and decison making for all students, this however doesn’t mean that anti-Semitism has disappeared from the university. To the contrary; in future as well, the criticism and interventions against of anti-Semitic statements, event and appeals are to be made early on. [Author’s translation]

The statement issued by student representatives this week was an attempt expose the anti-Semitic nature of anti-Israel activism on the campus. The document quoted Monika Schwarz-Friesel, a professor of linguistics at the Technical University of Berlin, pointed at the lack of awareness on German campuses regarding varying forms of anti-Semitism, including the anti-Israel boycott campaign (BDS Movement).

The resolution passed by students earlier this month got support from across the political spectrum with both major students groups, Social Democratic youth organisation (JuSo) and libertarian-leaning Young Liberals, backing the motion.

Had the Leipzig University student body taken the trouble of doing its homework investigating BDS it would have found out that it is a peaceful protest movement aimed at ending the illegal occupation by Israel of the Palestinian territories and preserving the right of return of the Palestinians in accordance with the dictates of UN resolutions. To call this movement anti-Semitic is a gross misrepresentation of reality and reflects an intellectual laziness at best, mixed perhaps with a continued sense of guilt regarding the heinous crimes committed by an older generation of Germans against Jews and others known as the holocaust. If these young Germans feel guilty towards the Jews, they should deal more rationally with that guilt instead of projecting it in false accusations against BDS and the Palestinian people.