Yes, it includes a scenario at a public bathroom. 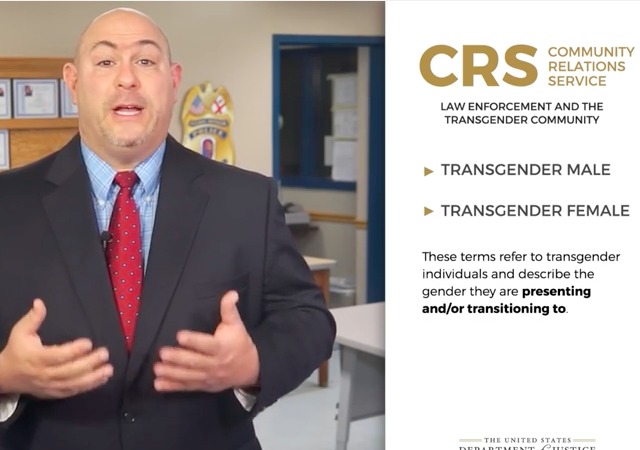 The Department of Justice has released a transgender training video for police, giving them guidance on how to handle situations they may come across with transgender people. The DOJ said:

“Transgender Americans, like all Americans, deserve to be treated with courtesy and respect by law enforcement officers,” said Acting Director Paul Monteiro of CRS [DOJ Community Relations Service]. “The information provided in this video will help strengthen the relationship between police and the transgender community, allowing for more effective investigations and safer encounters for officers and citizens alike.”

In their press release, the DOJ wrote:

The training uses three non-emergency and non-crisis situations to discuss ways for police officers to effectively and politely interact with transgender individuals. In promoting best practices, the video defines three important terms: assigned sex, sexual orientation and gender identity. As the training outlines, understanding the terminology and the major issues facing the transgender community can help rebuild trust and ensure that encounters are safe for all parties. The video also emphasizes the importance of distinguishing between a threat and a stereotype, and notes that individuals who feel disrespected are less likely to have faith in or cooperate with law enforcement.

The training stresses that officers should keep their questions relevant to the contact and remain courteous throughout the encounter. In one of the examples, the video demonstrates an officer laughing and using an inappropriate pronoun to address a transgender individual who appears to be the victim of a crime and the officer’s partner pulls him aside to correct his behavior. Afterwards, the offending officer apologizes for his prior conduct and approaches the rest of the interview with the necessary respect and professionalism. This illustration not only highlights how officers should act with members of the transgender community, but also addresses the need for officers to say something to their peers when they see problematic behavior.

Of course they added a bathroom encounter, which has taken the nation by storm. The video shows an officer answering a 911 call from a female about a male using the female bathroom:

“The reason I’m here is we got a complaint in regards to a gentleman using the wrong restroom. Were you in the restroom?” the officer asked.

“Yes officer, but I’m a woman. I was in there using the restroom,” the transgender woman responded.

“Was there anyone else in the restroom?” the officer said.
“No, I was in there alone,” she said.

“Sorry for the inconvenience, I apologize. It was probably a misunderstanding,” the officer said, ending the encounter.

But as The Washington Times points out, the video did not take into account calls about young males using the female bathrooms at schools. In May, Texas and 12 other states filed suit against the Obama administration to delay the demand that all public schools allow transgender children use whichever bathroom they want. This month, a federal judge granted a temporary injuction because the administration “did not follow proper procedures for notice and comment in issuing the guidelines.”

It also didn’t mention North Carolina’s HB2 law that doesn’t allow males or females to use the other bathroom even if they identify as the opposite sex. This has led to businesses and celebrities to boycott the state.

The video ends with narrator Sgt. Brett Parson encouraging officers to implement policies on how to handle any situation involving a transgender person.

LEOs deal with sick, insane individuals every day. Why not a much more broadly applicable video?

Maybe because then they would be known as the BoJ?

I wasn’t aware that the DOJ could nullify the decisions of the NC state legislature. Sounds like they have a different version of the constitution than I do.

The Feds are going off the Cliff Notes version of the Constitution.

Did they explain that this policy allows convicted sex offenders to invade women’s restrooms and locker rooms? That they can parade around naked fully erect and ogle naked women?

Transgender spectrum disorder is a behavioral disorder that includes crossovers, homosexuals, and other sexual deviants.

The State-established Pro-Choice Church is more confused than the dysfunctional individuals it patronizes.

Throw another baby on the barbie. We live in interesting times.

Local police don’t need guidance from anybody in Washington about how to treat cross dressers.

So glad that the DoJ has nothing better to do, like, oh, prosecute Hillary Clinton…..

The Obummer administration is like a Benny Hill chase scene.

On the fourth day He created night sticks.

Pardon me while I puke. Hey Paul Ryan, maybe you could cut this from the budget?

One would think that are millions upon millions of slighted transgender people running all over.

This is beyond ridiculous. It’s a colossal waste of cop time and money.

This is disgusting. This is Obastard and his “transformation” of the U.S. to a mecca for sickos and parasites.