Does Dem Senate Candidate Bayh Live in Indiana or DC?

Does Dem Senate Candidate Bayh Live in Indiana or DC?

How does someone mess up their address? 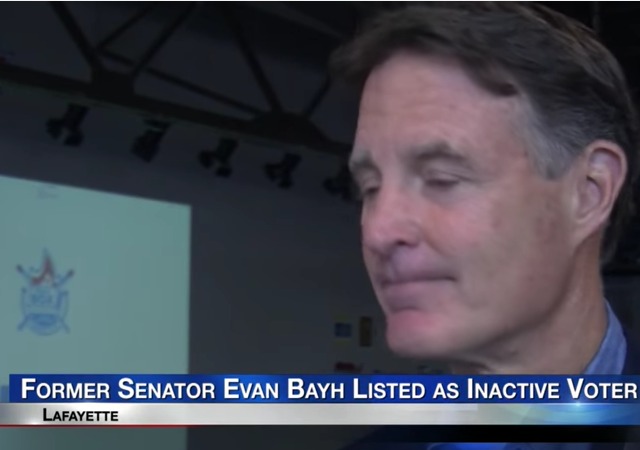 Indiana Democrat Senate candidate Evan Bayh wants to win back the seat he gave up in 2011, but does he even live in the state? He told WISH-TV:

But Independent Journal Review found that his address is actually on Canterbury Square. This has only added fuel to claims that he doesn’t actually live in Indiana and rarely visits.

This development comes days after CNN reported that Indiana election officials found Bayh as an inactive voter “after they failed to confirm he lives in Indianapolis:”

According to records obtained by CNN, Bayh has been listed as an inactive voter twice since leaving office — once in July 2014 and the second time last week.

In both instances, election officials had sent multiple postcards to Bayh’s Indianapolis address to determine that he lives there. Both times the post office could not reach Bayh at the condo he owns in Indianapolis despite multiple attempts, prompting the Indiana Election Division to list him as inactive, according to copies of the mailers and state voting records.

Bayh is still a registered voter, and being listed as inactive does not prevent the former two-term senator and governor from voting in the state. But being considered inactive is the first step from being removed altogether from the voter rolls.

CNN also discovered that he “consistently listing his two multi-million-dollar homes in Washington as his main places of residence, not his $53,000 condo in Indianapolis, contradicting his public claims that he “never left” the state after giving up his seat in 2011.”

Despite all this, the Senate Majority PAC found that Bayh leads his opponent Rep. Todd Young (R-IN) by 18 points:

The survey, conducted by Global Strategy Group from Aug. 10 to Aug. 14, shows Bayh with a 55-percent favorable rating and besting Republican Rep. Todd Young (R-Ind.) 54 percent to 36 percent in a head-to-head match-up.

“Evan Bayh has weathered millions in attacks from Todd Young and his allies and yet still leads by 18 points because voters know he’s a principled, bipartisan leader who will put Hoosiers first,” said Shripal Shah, the spokesman for Senate Majority PAC.

“Bayh’s cross-partisan appeal will be very difficult for Republicans to overcome between now and November,” he said.

The GOP is desperate to hold onto its majority in the Senate and it shows in Indiana. GOP outside groups “have spent or reserved air time worth a total of $2.5 million since Aug. 1.” Democrat groups only spent $1.3 million.

He should have a condo in DC and a home in Indiana if he wants to be reelected.

Birch Bayh was a fraud, too. One of the first of the gun grabbers I saw through as a lying SOS.

Hillary didn’t live in NY yet she got herself elected. Democrat voters just don’t care.

Rags: Agreed on Birch Bayh. Also, his attempt to dismantle the CIA could’ve cost us the Cold War.

Carpetbaggers!
They’re so irritating, and sometimes there’s little we can do against them. Here in Florida, candidates to the State Senate and Congress are required to live in the district that they represent. However, they are allowed to run IF they move into the district within 6 months of taking office.
Right now, for example, there’s a Phillip Brutus, shady character if you ask me, running for State Senate in my district (38). The guy lives in district 35!
Things need to change, but who’s going to change them? Politicians are not very inclined to pass legislation that makes it harder for them to stay in office.

juuuust a bit harder to get confused when you “live there”

Where is John Kasich’s father when you need him?

Gosh! So the rumor attributed to friends of Kasich’s mom, that John’s father was really a milkman, isn’t true?

Who the hell does he think he’s kidding?

Dick Lugar got himself involuntarily retired for this kind of crap.

And so nice of Mitch McConnell and the Chamber of Commerce to take out Marlin Stutzman in the Primary and saddling us with one of Boehners butt-boys.

Unless he specifically declared residency somewhere else and registered to vote there I think he’ll be fine. I’d assume that this is really part of a political strategy to portray him as out of touch with the people of Indiana and not representing their interests and values. Since his retirement from the Senate he’s basically been cashing in on his name and connections. But he and his family have been fixtures in Indiana for decades.

Even Bayh is sometimes classified as a moderate Democrat, but I think most people in politics do understand that it’s an act designed to win over voters in more centrist Indiana. If the Democratic party really needs him to vote a certain way, he’ll do it, but if they can do without his vote, they’ll let him take a more centrist position in order to maintain his image. He was supposedly a coin flip away from being Obama’s VP and, one would assume, running against Hillary this year.

Pat Roberts almost got unelected last time for this kind of stuff too. This may be his last term.

Laws are only for the common folk, not the elite.

Richard Lugar went through this sort of exposé in 2012 and lost on the primary ballot – but Democrats want winners and carpetbaggers are welcome. Lugar claimed that he lived at the Lugar family farm but rarely ever showed up in the state even as the Senior Senator.

Not even the melodious musical strains of “Back Home Again In Indiana” will bring them back to America’s Heartland.