That used to be a bad thing. 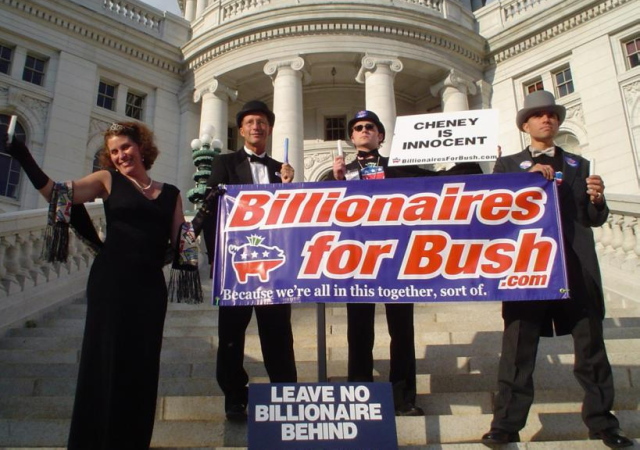 During the presidency of George W. Bush, a left wing theater group called “Billionaires for Bush” would show up at political events dressed in tuxedos and top hats while chomping cigars.

The whole point was to make it look like wealthy people in America supported Bush and by extension, all Republican policies because after all, only rich people support Republicans, right?

Billionaires for Bush has been silent for most of President Obama’s two terms despite the aptly chosen nickname “President Goldman Sachs” assigned to Obama by Glenn Reynolds of Instapundit.

Bernie Sanders and Elizabeth Warren, both of whom have endorsed Hillary Clinton, made their political careers by specifically bashing “millionaires and billionaires” on a regular basis. It’s the stuff of debate drinking games.

Yet lately, we’re being told that billionaires who support Hillary Clinton are a sign of her strength as a candidate. Take, for example, this piece from the Huffington Post:

Billionaire hedge fund manager Seth Klarman said on Wednesday he would work to get Hillary Clinton elected president of the United States because he finds recent comments by Donald Trump “shockingly unacceptable.”

“His words and actions over the last several days are so shockingly unacceptable in our diverse and democratic society that it is simply unthinkable that Donald Trump could become our president,” Klarman said of the Republican presidential nominee.

The president and chief executive of The Baupost Group told Reuters in an emailed statement that Trump’s suggestion “that the election will be rigged is particularly dangerous.”

“I will continue to find ways to support Hillary Clinton and defeat Donald Trump,” he said.

“Trump scares me,” Cuban said after speaking on behalf of Clinton and Tim Kaine, her vice presidential nominee. “Donald, initially, I really hoped he would be something different, that as a businessperson, I thought there was an opportunity there. But then he went off the reservation and went bats— crazy.”

Cuban also said that he had talked to Trump before he endorsed Clinton and urged the real estate mogul-turned-candidate that at some point he had to adapt and learn policy.

Warren Buffet is also on board. The New York Post reported:

Hillary Clinton will get a helping hand at a fundraiser in Omaha, Nebraska, Monday from deep-pocketed investor Warren Buffett — the third billionaire in less than a week to jump to the Democratic presidential nominee’s aid.

The two will hold a public rally together at Omaha North High Magnet School, where Clinton “will discuss her commitment to building an economy that works for everyone, not just those at the top,” according to the Clinton campaign.

So here’s the question…

If the left thought billionaires were evil under Bush, why are they suddenly a force of good for supporting Hillary Clinton?

The answer is obvious.

Can billionaires vote more than once?

The People of little and moderate means were the friends of Democrats before they were their enemy. And before them was Posterity, who were casually excised — an object lesson — from the constitution and denied human rights.

The Democrats’ Pro-Choice religious/moral philosophy is a many selective thing. I wonder how much they will launder this time by credit and ransom.

This is clear optics. The Democrats are funded by the 1%, foreign and domestic.

Most billionaires are Leftist because with Leftist systems of government allows the 1% to remain at the top no matter what without competition from ‘on-the-rise’ billionaires under a capitalist economy. You know typical Leftist behavior.

Leftist economics favor monopoly formation. The cronies and crones love them/it. Capitalism, not so much.

You mean billionaires do the “crabs in a bucket” thing too?

Some D’rat bigwigs actually thought that “Big Money Supports Hillary” would be a good campaign pitch?

As we’ve all noticed before, neither party seems to be terribly “in touch”.

The two wealthiest people in the USA (and the world) are Democrats: Buffett and Gates. And then there’s Marky Z, who loves ANYTHING Liberal–not sure where he is on the Wealth Scale.

Clarice Feldman of American Thinker has been predicting a “monster election” since February. She does so again in her article today. I agree with her.

In today’s article she says Trump will get 73 million votes. Dwarfing Obama’s 2008 total by 8 to 10 million votes. She sites others making similar forecasts. She cites the dynamics behind her forecast. I agree with her as I’ve had similar thought’s. She cites the ongoing media & democrat meltdown. She cites the differential in attendance between the size & enthusiasm of a Hillary rally to a Trump rally.
Trump- Pence, 2016. Reelect Trump, 2020.

Will not help. Hillary will get 798 million votes from just one precinct in Chicago.

One precinct or one cemetary?

Ballot boxes stuffed with votes for H->illary! will continue to be “discovered” as long as necessary for her to win the election.

To progressive ideologues whatever gives the “other” side an advantage is a bad thing. Hence, big money donors, big Wall Street participation, behind the scenes sabotage of candidates, etc., is all fine because it’s for the “right cause”. People doing it probably have “good hearts” without “evil intent.”

When it’s the other side, just reverse all of that.