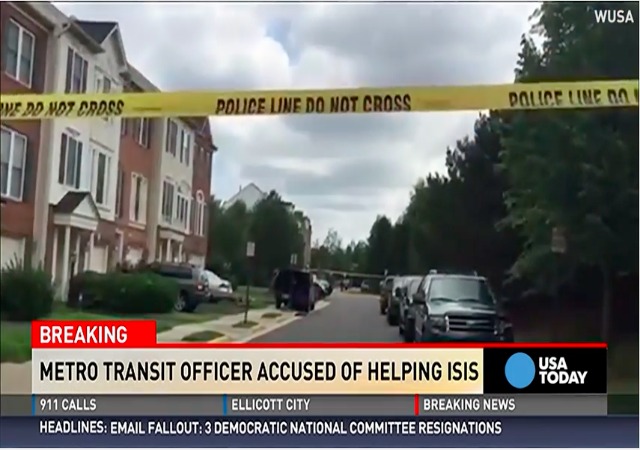 Authorities in Washington, D.C., arrested a Metro officer who allegedly attempted to help ISIS with material support. Officials have never arrested a member of law enforcement before for helping the group.

Nicholas Young, 36, lived in Fairfax, VA, and met an FBI informant 20 times. He passed on “22 digital gift cards to this person for intended use with mobile messaging accounts that ISIS uses in recruiting.”

The complaint shows he had connections to local sympathizers Zachary Chesser and Amine El Khalifi:

Chesser was sentenced in federal court in 2011 to 25 years in prison for aiding Al Qaeda affiliate Al Shabaab. Chesser is known for threatening the creators of South Park for the show’s depiction of the prophet Mohamed. Khalifi was arrested in 2012 for attempting to detonate an explosive vest in the U.S. Capitol Building.

Other documents explained how authorities came to arrest Young, which started back in 2010:

Court document show federal investigators also questioned Young about trips he had taken to Libya in 2011. Young told FBI agents during an interview that he traveled twice to the North African nation to assist rebels attempting to overthrow the regime of then-dictator Muammar Qaddafi.

A baggage search by Customs and Border Protection on one of Young’s outbound trips revealed he had traveled with body armor, a Kevlar helmet, and “several other military-style items,” according to the criminal complaint.

Young is also alleged to have been in possession of a large cache of firearms, including numerous rifles and handguns at his home.

Young also told the informant in 2012 after authorities arrested Khalifi “that Muslims should actively try to uncover the informants who led to Khalifi’s arrest.” IRONY.

He dressed up as Jihadi John, the man who has beheaded numerous hostages in ISIS videos, for Halloween in 2014. After the Charlie Hebdo attack, he told his informants that people now “understand there are some lines you don’t cross.”

“Since I received my first briefing on this matter, [Metro Transit Police] Chief [Ronald] Pavlik and I have worked hand-in-glove with the FBI in the interest of public safety and to ensure that this individual would be brought to justice,” Metro General Manager/CEO Paul Wiedefeld said in a statement.

If he assisted rebels overthrowing Gaddafi, wasn’t he on the same side as Hillary Clinton?

I’m sure the FBI is already on the case, asking the same question, and planning to charge Hillary.

No, wait. Perhaps Hillary (royalty) did not intend to be on the same side as Young (a commoner) so she would not be charged…or however intent applies to the ruling class as a neutralizer for guilt.

Hummmmm! Isn’t Obama really the first (Federal) law enforcement person, of a kind at least, to have openly supported ISIS; by his actions and statements!

Yes, but he hasn’t been arrested (yet).

This Nicholas Young is the first LEO to be arrested for providing ISIS material support.

Which should be treason, but wait … no … the Obama Administration refuses to acknowledge ISIS/ISIL as an enemy of the U.S….

The FBI is supposedly monitoring over 1000 Jihadis within the U.S., and this is the guy who finally qualifies for arrest?!
I’ll grant that his position as a transit cop is undesirable, and buying gift cards for Jihadis is despicable, but what is really intolerable is dressing up as Jihadi John for Halloween!

Oh, and he owns guns too. Every American knows by now how treasonous that is!