Reach Out to a Group that Chants ‘Pigs in a Blanket, Fry ’em Like Bacon’? 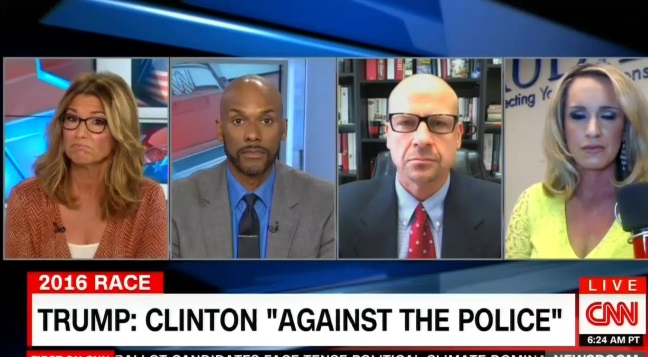 Tell us, Carol: the leaders of which Black Lives Matter chant would you suggest Donald Trump “reach out” to: “pigs in a blanket, fry ’em like bacon,” or “what do we want? Dead cops! When do we want it? Now!”

On her CNN show this morning, Carol Costello suggested to Trump supporter Scottie Nell Hughes that Trump should be “reaching out” to Black Lives Matter. When Hughes replied that the Trump campaign has reached out to the black community, Costello interrupted incredulously “to Black Lives Matter?” Perhaps someone can do the research and find the last time Costello suggested to a Hillary supporter that Clinton should be “reaching out” to the KKK or Stormfront.

CAROL COSTELLO: So Scottie, on the subject of building bridges, Donald Trump gave his big law and order speech earlier this week, he spoke to a largely white crowd and talked of his support for police, but he has not sat down with members of the black community so far. Why not?

SCOTTIE NELL HUGHES: Well, he has sat down. He actually has a very active urban coalition of black pastors, black leaders that are Republicans that he has met with several times, even from the very beginning, that was one of the first groups.

COSTELLO: I’m talking about people from within these communities. And perhaps reaching out to Black Lives Matter.

HUGHES: And I think the campaign has reached out to them. Just because they reach out doesn’t mean that they’re —

HUGHES: Well I don’t know about Black Lives Matter. But he has reached out. He’s always had an open invitation to those within the black community to come into any of these meetings with the pastors.

Why would anyone reach out to them?

This whole thing of the dems can do no wrong and all opposition can do nothing right has to go. BLM consists of a bunch of lawless, activist thugs. Put them in jail for the criminal behavior and violence they promote.

BLM was born from a big lie. “Hand Up Don’t Shoot”.

BLM is a terrorist group. Members of the group have called for the death of police officers.

Shame on people in leadership (Crooked Hillary/Obama) that embrace this violent group.

To these “journalists” there are no blacks besides BLM.

BLM isn’t just an American problem, either. They’re going wherever they can, and they have a huge pile of money behind them, most all from Leftist charities.

They are going to have to be gone after at every level of American life; cultural, legal, regulatory, etc.

That’s essentially what he said & did with the Milwaukee speech. As his spokesperson said, he’s done it also with other black groups.
So what it breaks down to is you agree with C. C. Trump should reach out & listen to grouping’s who vehemently oppose him & will never vote for him.

Ps.
My above response was directed at Milkshakes.

Right. A bog-standard and utterly unimaginative response will catch them with their rhetorical pants down, for sure; and they’ll have no response available but to scuttle back into their holes, leap into their wee beds, curl up in fetal positions and turn their electric blankets up to “9”.

Trump isn’t dealing with rational or honest actors. He’d be out of his mind to pretend that he is.

But he’s not out of his mind—he’s just plain clueless. As we are constantly assured.

Yeah, sure he is.

Perhaps someone can do the research and find the last time Costello suggested to a Hillary supporter that Clinton should be “reaching out” to the KKK or Stormfront.

Race supremacist groups are almost invariably leftist in their ideology. (See: BLM, KKK, La Raza, etc.) Hillary Clinton doesn’t have to “reach out” to any of them; they’re already on her side. Costello undoubtedly knows this, too; she’s trying to catch the Trump supporter in a “gotcha” moment.

Trump’s campaign is reaching out to the black community. Not BLM; they are ostensibly part of the black community (a relatively small part), but their willingness to burn their own neighborhoods to the ground over any perceived “injustice” decidedly puts them at odds with the rest. Reaching out to other, more mainstream segments of the community — like pastors and other local leaders — is a smarter move.

I don’t know what this talking chucklehead thinks she is doing. Perhaps she thinks normal, law-abiding black folk cannot see through the BLM nonsense. Or maybe she just wants to pretend that the following speech, where Donald Trump reaches out to black voters, did not happen.

Main victims of these riots (in Milwaukee) are law-abiding African-American citizens living in these neighborhoods.

There is no compassion in tolerating lawless conduct

Speaking of that fine organization as well as that compassionate civic minded group the black panthers, where are they?
Jiggy Down Tomysocks would like to know why they haven’t come to New Orleans to help out black people.

Thanks for the advice, Abbot & Costello.

“Clinton should be “reaching out” to the KKK”

Why wouldn’t she? The KKK was every bit as thoroughly Democrat as the BLM terrorists are.