The Clexit Coalition is leading The Great Climate Escape 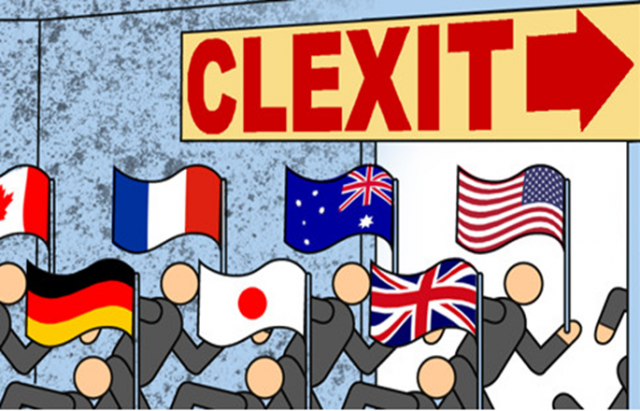 In the US, there has been calls for #Calexit to remove the state of California. The Democrats are experiencing the travails of #Demexit after the disclosure that the DNC intentionally hurt the Bernie Sanders campaign to promote Hillary Clinton.

Now, an international organization has formed with the goal of preventing the ratification of the costly and dangerous Paris global warming treaty that is being promoted by the elites within the EU and US.

Viv Forbes is the Chairman of the Carbon Sense Coalition, which was created to “defend the role of carbon on earth and in the atmosphere.” He has a degree in Applied Science Geology, and Fellow of the Australasian Institute of Mining and Metallurgy.

As the secretary of Clexit, the organization working to rescind the Paris treaty obligations related to climate change, Forbes issued a formal statement:

For the EU and the rest of the Western world, ratification and enforcement of the Paris Treaty (and all the other associated decrees and Agendas) would herald the end of low-cost hydrocarbon transport and electricity, and the exit of their manufacturing, processing and refining industries to countries with low-cost energy.

For developing countries, the Paris Treaty would deny them the benefits of reliable low-cost hydrocarbon energy, compelling them to rely on biomass heating and costly weather-dependent and unreliable power supplies, thus prolonging and increasing their dependency on international handouts. They will soon resent being told to remain forever in an energy-deprived wind/solar/wood/bicycle economy.

Perhaps the most insidious feature of the UN climate plan is the “Green Climate Fund”. Under this scheme, selected nations (“The rich”) are marked to pour billions of dollars into a green slush fund. The funds will then be used to bribe other countries (“developing and emerging nations”) into adopting silly green energy policies.

The roster of scientific luminaries on the Clexit committee is most impressive, and includes Dr. William Happer of Princeton (whom I have often quoted on my Climate Alarmism articles for Legal Insurrection). Happer offered additional background on the science behind the movement:

Extremists have conflated these genuine environmental concerns with the emission of CO2 [carbon dioxide], which cannot be economically removed from exhaust gases. Calling CO2 a “pollutant” that must be eliminated, with even more zeal than real pollutants, is Orwellian Newspeak… “Buying insurance” against potential climate disasters by forcibly curtailing the use of fossil fuels is like buying “protection” from the mafia. There is nothing to insure against, except the threats of an increasingly totalitarian coalition of politicians, government bureaucrats, crony capitalists, thuggish nongovernmental organizations like Greenpeace, etc.

Clexit hopes to counter climate alarmism with sensible science education and reasonable regulatory proposals, such as this video explaining the realities of carbon dioxide:

Let’s hope #Clexit is a successful as #Brexit.

I don’t know anything about Doug, but damn it Rags I’m with you on Texit. I’d even watch the Longhorn channel if it would happen sooner.

So, you cannot answer my questions regarding Texit! Didn’t the 1870 Recertification (Reconstruction) Act nullify the conditions of the 1845 legislation bringing Texas into the Union(Nullify the original right of secession and the right to form four more states from the whole) ?

Rags, clearly you’ve gone over the edge, must be because you’ve lost your manhood over #nevertrump and from waving your “Crux the Raging Bull” flag? What’s next, Seppuku?

One Congressman has the right idea,

“introduced last year by Congressman Mike Rogers (R-Ala.) and in many other previous Congresses. If approved, the legislation would repeal the UN Participation Act of 1945 and shutter the U.S. government’s mission to the outfit. It would also “terminate all membership by the United States in the United Nations, and in any organ, specialized agency, commission, or other formally affiliated body of the United Nations.” That specifically includes UNESCO, which President Ronald Reagan withdrew from, along with the World Health Organization, the UN Environment Program (UNEP), and more. It would end all U.S. involvement in all UN conventions and agreements, too.”

Excellent, Leslie, as always. Clexit should also covey the great benefits CO2 has brought to earth since there was life, which flourished at 10,000 times the CO2 concentration we have today, and how controlled experiments have proved the amazing enhancement of plant growth produced by increasing CO2. Many U.S. growers install a CO2 producer to increases plant growth. And finally, shutting down or fining fossil fuel plants by the EPA (1) reduces agriculture production which third-world countries vitally depend upon, (2)causes energy production costs to increase, in the U.S., hurting the poorest among us who have the least disposable income for essentials (heating, electricity, gasoline), and (3) produces increased unemployment among the many workers in the harvesting, processing, and distribution of coal, oil and natural gas (which dwarfs the number of people working on alternative energy sources).

Dr. Happer is a friend & college of my brother Terry. Both work in the same field.
In an article I just read elsewhere a growing dispute within the field is arising from contrary science arguing we’re entering a period of cooling due to cyclic solar activity. This position is being suggested by Russian, Indian, Australian & other scientists from less “prestigious” quarters.
Here’s to yet another dispute between the scientifically & politicized western science of privilege, & their less “distinguished” collogues from the more earthy parts of the globe.

I’ve reached the point when Mexico can have California back because it is a wart on America’s face. California is extremely anti-constitutional as is all Leftist and their ideology.

BUT, where will all those liberal sob’s go when it becomes Mexico again?

It really should be called “a Clexorectomy”.