When it comes to freedom and independence, forget about the price tag. 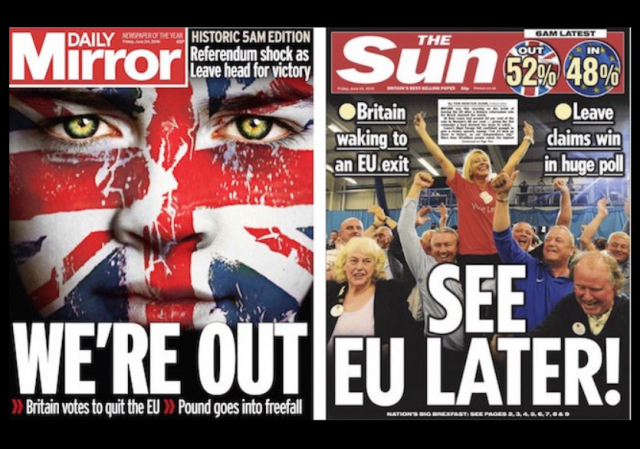 The reaction to the British vote to leave the EU focuses heavily on the money.

It will cost Britain jobs. The Pound is getting pounded. The EU will extract a price as bureaucratic retribution.

Britain shot itself in the economy. The departure allegedly will destroy young people, female workers, the arts, science, universities and students, just about everything else British, and even …. Massachusetts!

I’m not going to read too much into this for the U.S. presidential election, even if some liberal writers are besides themselves with fear.

As I kept reading the dire Brexit economic warnings, the lines from the Jesse J. song “Price Tag” kept popping up in my mind:

Maybe Brexit wasn’t about the money, or the price tag.

What is the price of freedom and independence?

Whatever it is, for a majority of Brits, it’s a price worth paying.

“Churchill just lit up a cigar in his grave.” — Dennis Miller

Nah, Winnie and Maggie are enjoying a fine brandy, and maybe a cigar.

I’m not a trump fan, may vote (L) – BUT from the beginning the stars have been aligned for DJT. he seems always to be at the right time in the right place.

Why the Good Lord wants this, I have absolutely NO idea.

This Heartland article explains the predisposition of a Trump voter:

In all due respect and in my opinion the article by your Libertarian hero Mr Eberling is pure garbage!

jennifer a johnson: I have read the article you linked and can only say that it is pure wish-casting bunk. I can explain this in sentences of words containing 5 letters or less if “wish-casting bunk” is not clear but I have resisted.

Your detractors are very articulate.

Eventually, conservatives will have to admit they didn’t get behind a single candidate that could articulate a message that could sell to a majority of GOP voters in 2016.

That’s not Trump’s fault, or his supporters.

The choice is simple. Hillary is a criminal who sold the favors of her office as SOS and betrayed our country by mishandling classified information in her attempt to hide the evidence of this corruption. Hillary would spend the rest of her life in prison if brought to trial. Trump is rude and ignores political correctness. The choice is obvious.

Pretty much every Leave voter acknowledged that Britain would take an economic punch over the leave.

They’re sick of unelected bureaucrats in Brussels making idiotic laws they have to follow, and they are ESPECIALLY sick of the bullshit the EU is spewing on immigration.

So they have accepted economic impact to have their own country back.

Would it be mis-placed or an exaggeration to call this a Magna Carta-like moment?

The brits were going to take a bigger hit if they stayed. Sometimes it’s better to cut losses and face the pain so as to not have to face more pain later. The EU wasn’t designed to last very long.

That’s what I found myself thinking too. Unelected, unaccountable bureaucracies tend to be terrible for everyone under them, save for the bureaucrats themselves. What they give today, they take away tomorrow, with just as much reason as they gave it in the first place.

The anti-native and [class] diversity factions lose a round. Obama and Merkel will need to find a new neighborhood to hide the casualties of progressive wars and impulsive regime changes. As well as audacious schemes to compensate for selective-child, Planned Parenthood, offshoring, inshoring, and progressive debt.

The best thing that should happen out of all of the Brexit or Remain is for the EU to quietly unravel and die.

This is likely, as I suspect Fraxit (France) will depart next, followed by the Netherlands. The cracks in the foundation have been visible for quite some time.

No, it’s not about the money, it’s about the betrayal of the Anglo-Saxon political tradition of limited, representative government, which is what the EU is for Britain.
Ironically, the self-styled nativists in the US are falling for a middle-European-style dictatorial figure. I’m beginning to believe we will have better luck with airlifting random Afghanis and teaching them about the US Constitution than doing the same to a good number of red-blooded Americans.

Edge ;
You get into trouble when you try to present yourself as 1/2 a share smarter than everyone else. It results in what you’re saying making no overall sense.
Just because something is incomprehensible doesn’t mean it’s so brilliant it’s beyond the grasp of the common herd. It more often means it’s incomprehensible.
We’ve now had over 7 years of the internationalist & statist crowd making the pitch Obama is a man ahead of his time. That’s just nonsense. He’s a clueless internationalist statist. As are the people pushing that false narrative.
Reality is people are asserting their thinking all the recent nonsense is leading to a world they never voted for. Increasingly run by an international bureaucratic priesthood no one wants. A priesthood unaccountable to the usual checks & balances.
That internationalist model may be preferable to people like yourself, Obama, Ryan, Pope Francis & others of your ilk. But most of the rest of us hate it. And a growing number are joining those of us that have been in long term resistance.

You are not required to respond to all comments, you know.

You make a lot of comments Edge. Far more than I ever do. Your observation therefore is inaccurate.
I’m usually in & out after I make my points. Your path on the other hand is strewn with dead, pulverized horse’s.
Are all those dead & pulverized horse’s a tell by any chance of your growing frustration that you’re loosing? Are you loosing Edge?
Seeing it’s been pretty much determined you are a statist & democrat operative, are you concerned you’re failing in your mission Edge?
Do you deep down now know Trump & his supporters are handing Hillary & her supporters such as yourself your collective asses Edge?
It must be difficult when the collective internationalist statism you’ve worked for so long is increasingly coming apart. Your collective body of lies is being increasingly exposed as the mountain of lies they are.
You’ll get no sympathy from this quarter. The war’s been too long, the resistance we’ve engaged in too prolonged & determined.

Ironiclly you just did, edge.

Britain should think twice about this.

When Japan’s Greater East Asia Co-Prosperity Sphere broke apart in 1945, things were a mess for years to come.

“Democracy is the theory that the common people know what they want, and deserve to get it good and hard.”

“Somewhat true, but only after the political class have made the baby indistinguishable from the bath water.”

Professor’s major point is correct, but I have been seeing that people in other parts of the EU are complaining that the Union is causing them economic hardship and harming their businesses. When the dust settles, the breakup or re-formation of the EU may actually turn out to be economically beneficial too.

That’s not to say that there are not some economic benefits to the EU. Having a single currency clearly cuts down transaction costs, while it simultaneously puts pressure on nations that are running up debt.

As originally conceived, an economic union might make sense. As a political regime, it is an economic and liberty nightmare. Half the Brits have this figured out.

Thankfully, more than half, (wink) 😉