May sales generate $10 million out of $500 million expected

In California, ballot measures have often been a way for citizens to receive some legislative relief from the insanity from Sacramento. However, if he has his way, Gov. Jerry Brown may use the state proposition system to continue imposing climate change rules toxic to business.

Gov. Jerry Brown may ask California voters to extend the state’s climate-change programs — including its pioneering cap-and-trade system — past 2020 if balking state legislators don’t do so this month, one of his top aides said Thursday.

Brown has staked much of his political legacy on the fight against global warming, aiming to slash California’s greenhouse-gas emissions 40 percent below 1990’s levels by the year 2030.

But the landmark 2006 law that created many of California’s climate programs spelled out specific emission cuts only through 2020. And the state’s legislative analyst has warned that California’s cap-and-trade system for limiting emissions may lack legal authorization to keep running after that year.

Brown is shooting for a 2018 ballot measure if the legislature does not come up with an extension of AB32/Global Warming Solutions Act.

Part of the problem is that the cap-and-trade system is running out of money, as the carbon emission permits used to fuel the regulatory inanity are no longer selling!

More questions arose at the state’s most recent auction of emission permits in May. The permits are the linchpin of the system, which requires businesses to cap their greenhouse gas emissions or buy sufficient permits to cover any excess.

For the first time since February 2013, when the quarterly auctions began, bidders stayed away in droves. Only 11% of the available permits were sold. That punched a hole in the state budget, for state finance officials expected that more than $500 million would be raised from the May sales. Instead only about $10 million came in. 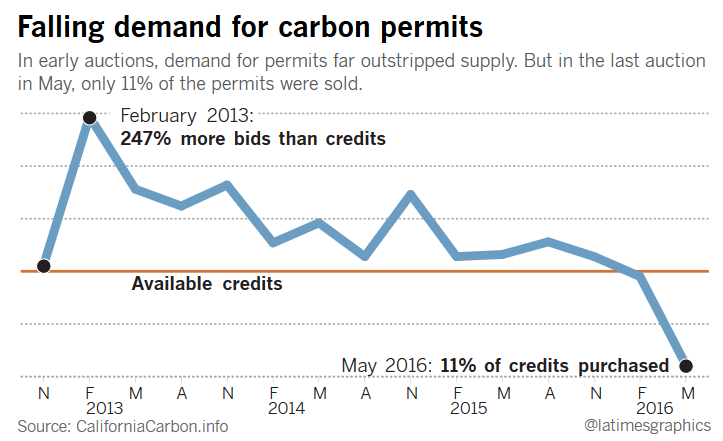 The shortfalls have the potential to impact Brown’s legacy project: The bullet train.

…Analysts suggested that legal uncertainty around cap and trade has damaged faith in a system that, like other markets, requires investors’ confidence to operate smoothly. They also said corporations and speculators are holding more permits than currently needed to cover the amount of greenhouse gas emissions in the state, a supply-and-demand problem that has been growing in every auction over the last year and could continue to choke revenue through 2017.

…Hanging in the balance is funding for the country’s largest infrastructure project, the $64-billion bullet train championed by Brown. Two years ago, as the governor struggled to get construction rolling, he turned to cap and trade to plug a shortfall in funding.

The hold-up is business-friendly Democrats (such as they exist in Sacramento) are not keen to greenlight all of Brown’s climate change rules. In fact, more than 10,000 businesses left the state, reduced their operations or curtailed plans to locate here between 2008 and 2015.

So, our more reasonable legislators are a little hesitant to move forward without a more well-constructed plan.

…Business-friendly Democrats hold more sway in the Assembly, where they also blocked a proposal to slash oil use for transportation last year.

In a statement Thursday, [Assembly Speaker Anthony] Rendon called for a cautious approach.

“The world needs California’s continued leadership to advance the fight against climate change, so it is vital that the solutions we put forward are as strong and as solid as possible,” Rendon said.

Or at least somewhat fiscally realistic!

I suspect the political climate will remain unchanged for quite some time, and our business environment will remain the Animas River of American enterprise.

However, it would be deliciously ironic if the law that Brown loves (the Global Warming Solutions Act) killed the legacy that our governor treasures.

A financial racket to subsidize the green blight. Save Bambi!

Save the Dodo! (damn abortionists)

Sequester carbon-based lifeforms! Save the planet!

It will run on Spotted-Owl feathers.

Irony – California will soon be importing more Crude oil than the rest of the country combined. Their restrictions on drilling mean that their refineries have to run on imported Crude while other US refineries are running on USA crude.

we’re a special kind of stupid, here in #Failifornia…

of course, the problem started a few decades back when all the idiots from back east started moving here, then voted to make it just like back home.

Jerry Brown is a second generation moron. His old man wasn’t Einstein either.

Jeebus Leslie, you keep hitting the nail on the head!

Some may not be familiar with the Curley Effect, first described by a pair of Harvard economists about a decade ago. It has more to say about Brown’s California than most things you’ll read. Link:

California is the future and dystopian it shall be.

I’m sure it’ll be okey dokey. It’s just that the right people haven’t been in charge yet.