Before and After: A Look at the Devastating Louisiana Floods

Before and After: A Look at the Devastating Louisiana Floods 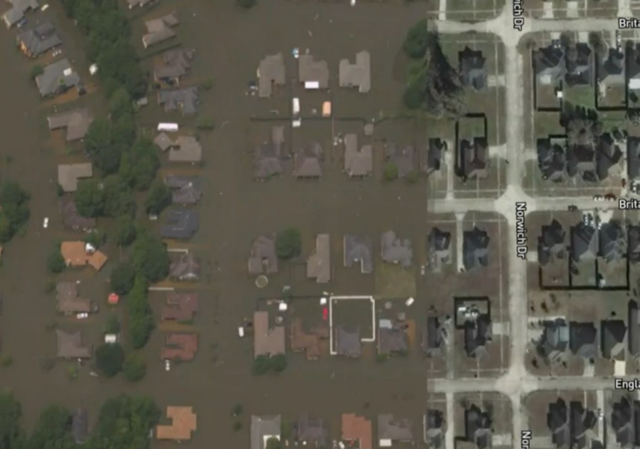 Though its certainly not getting the same or even similar coverage as Hurricane Katrina, massive swaths of Southeast Louisiana are under water.

To appreciate just how severe the flooding is, take a look at these before and after shots compiled by the BBC:

How much rain did SE Louisiana get? This much:

4 TRILLION GALLONS: The total rainfall over southern Louisiana Aug. 12-14 was equivalent to more than 4 trillion gallons of water, according to Dr. Matt Sitkowski of The Weather Channel. That’s enough water to fill more than six million Olympic-sized swimming pools, he added.

Why the lack of wall to wall media coverage? Most obviously, the fact that communities are banding together to help one another isn’t as sexy as “George Bush doesn’t care about black people.”

One of the most thoughtful exposé on the matter was written by Skye Cooley for the Huffington Post:

Through it all, media coverage was so lacking that people living outside of the immediate area resorted to social media sites to updates themselves on what was happening in the area; using uploaded videos, pictures, and posts to piece together events and timelines, the pathways of the moving water, and how long the crisis would last. As cellular service failed, power went out across town after town, and families scrambled to find shelter, secure rescue, and just survive…news media coverage was virtually silent. A number of very good articles have been written about why, mostly speaking on the fact that the flood did not fit the narrative of entertainment the news media requires in order to garner coverage. The few articles that complain on the lack of national media coverage all have the same goal in mind… to get more media coverage on the event so that the scope of the tragedy can be known and help given to those people in need.

To accomplish this, they focus on the scope of the tragedy itself; as I resorted to earlier in this piece. In order to achieve the goal of coverage, those of us who care about the heartbreak in southeast Louisiana are forced to package it in those narrative frames of entertainment and historic loss in order to get anyone to care… and that to me is the larger tragedy. The tragedy is that strong, loving, cohesive communities, because of their strength and resilience, cannot be celebrated and assisted at the same time. That in order to be worthy of attention the very fabric of societal order has to have been sheered away; news media requires scenes that look like a zombie apocalypse, not scores of hometown heroes trying their best to rescue one another.

Louisiana is a resilient state built by self-reliant, hard-working people. I have no doubts they’ll bounce back just fine, with or without the media spotlight.

Kemberlee Kaye: Though its certainly not getting the same or even similar coverage as Hurricane Katrina, massive swaths of Southeast Louisiana are under water.

Keep in mind that Katrina resulted in at least 1,245 deaths, while the current flooding has only resulted in a dozen or so deaths. In addition, the emergency response to Katrina was bungled.

The response wasn’t bungled; That’s just what CNN told you.

Yes indeed. The Federal response was imaginative and energetic.

Local response from the governments of the soporific and incompetent Mayor Nagin and the avaricious and hysterical Governor Blanco, not so much.

Naturally, The Narrative pretends that things were otherwise.

No. It’s what the Bush White House itself determined in The Federal Response to Hurricane Katrina: Lessons Learned

The main reasons little to no media coverage (touched on in the HuffPo article):

* Democrat President (in an election year – don’t want to ding the Democrats!!)
* Democrat Governor (contrast with the last governor, Bobby Jindal (R), who made response to the most recent LA disasters much smoother by being PREPARED, and using the RECOVERY PLANS)
* The Cajun Navy and the community moving quickly into rescue and assistance activities (as you mentioned)

Small government and individuals doing what BIG GOVERNMENT could not.

Remember during Katrina how the “Cajun Navy” was turned away by the authorities? Same with the Red Cross. They drove down with truckloads of supplies but were turned back. Same with all the doctors that showed up to treat the injured. Democrat gov. Blanco wouldn’t let them in because they weren’t licensed in LA.

Different place, different kind of people. These people are self-helpers. A lot (not all) of what I saw in New Orleans during Katrina was “gimme gimme” and not much willingness for self-help.

Some decades ago, I was shocked to here that half of NOLA’s residents were food stamps.

You have generations there who have been dependent. That’s a crime.

The Cajun Navy is real.

So Kemberlee, are you not going to give at least a begrudging “attaboy” to Trump for going down there while Obama was golfing and attending fundraisers? Even Drudge is making fun of Obama on this (see front page).

“Doing the photo-ops that Barracula doesn’t need to do…”

10 rounds of golf with assorted bankers, financers, celebrities, donors, toadies, & other hangers on in a 16 day stay in largely white, elitist Martha’s vineyards. Including Hillary Clinton who’s shaking down celebrity’s with Cher today. There’s a lot of celebrity’s to be shaken down.
As to any #never T-rumptard giving the legitimate republican nominee an Atta boy, when & if that ever happens it’s likely to be with serious caveats.

It’s now over a half hour since your question.

We’ve already covered that, snopercod. Here’s the link in case you missed it: https://legalinsurrection.com/2016/08/trumps-doing-the-presidenting-obama-wont-do/

Baton Rouge and the other cities are not the bastions of left wing decadence that New Orleans is, thus they don’t count in the scheme of the left wing narrative. Now, if the flood had hit New Orleans first, the media would have been covering it wall to wall like they did Katrina. Other thing, is that most of these cities that were hit had white majority populations.

It’s pretty bad. Areas that have never ever flooded had 2 to 3 ft of water in their homes. Many were really caught off guard.

Local emergency responders did a great job and the state came in pretty quick as well. The Cajun Navy were just regular guys with boats that really saved the day.

The neighborhood I grew up in had serious flooding and we went there yesterday to gut homes. It’s really sad seeing someone’s life out on a curb.

If you are someone who wants to give I would suggest a church group. They will get the charity to those who need the help.