A “playful joust” or the real deal? 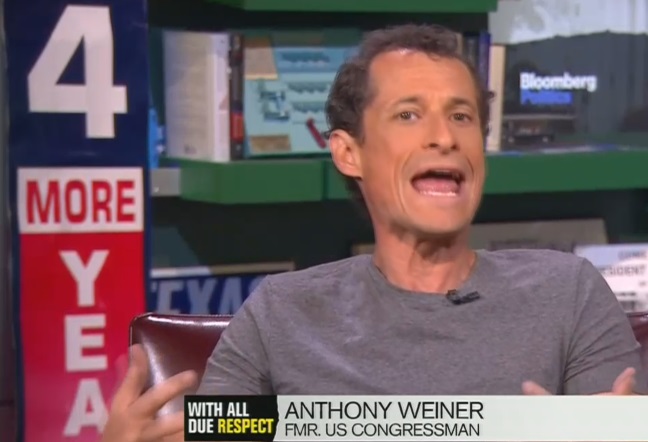 Anthony “Carlos Danger” Weiner‘s online sexual predator persona is very well known.  His lewd forays on social media made him a disgraced laughingstock, and he ultimately resigned his House seat and then withdrew his bid for mayor of New York City as a result.

Sext fiend Anthony Weiner boasted of his animal prowess — claiming he was “deceptively strong . . . like a mongoose” — and gave his cellphone number to a college student during a flirty, private online chat on a recent trip to Los Angeles, The Post has learned.

But the joke was on the horndog pol, whose wife, Huma Abedin, is a top aide and close confidante of Hillary Clinton.

The target of his online affection was really a dude.

Catfishing occurs when someone online pretends to be someone they are not to lure unsuspecting people into a romantic and/or (cyber) sexual relationship.  The term became well-known in social media circles following the release of the film Catfish and the television series of the same name.

“Funny scene here,” Weiner writes in one of the Twitter direct messages, sent from his hotel room in LA, where he had traveled to appear on HBO’s “Real Time with Bill Maher.”

“I moved the tv so I could hear/see it while in the shower. I dropped it. Neighbor complained. Me Towel. Tv. Floor. And now concierge on the way.”

The student, a New Yorker ­using a female friend’s Twitter account and calling himself “Nikki,” responds, “Come out with just the towel on when he/she knocks, would pretty much = a tip for the concierge.”

Weiner referred to himself as a mongoose in the exchange—the exchange can be read in full here—and even included a “selfie” of a mongoose. At one point in the exchange he expresses a desire to show “Nikki” his “mongoose parts.”  He also sent two photos of women with their mouths open, the first with the message “Sexy, no?”.

The “catfish,” who heads a ­Republican club at his NYC-area college, called Weiner an easy mark.

“The first time was the charm,” he told The Post. All it took was to retweet one of Weiner’s posts and add a comment.

“The amount of effort this took was the most alarming thing given his history,” he said.

“I was trying to think how to get him to say something stupid without making it so obvious.”

For his part, Weiner claims that he knew “Nikki” was catfishing him and regarded the exchange as a “playful joust with an obvious catfish.”  The exchange took place on two days (July 25 and July 27), with Weiner being the one to reach out when the conversation resumed on the 27th.

“I knew it was an obvious catfish, which is why I played along as though I didn’t. I’m clever, like a mongoose, that way.”

They don’t even bother to try and lie convincingly anymore.
I’m sure the msm will be all over huma asking about her husband’s reasons for seeking solace elsewhere than the marriage…..a n y minute now….

Spellchecker always changes Huma to human , It is always good for a laugh.

All this chaos can be traced to sell-out of the crying boehners. Every single aspect of it.

But for their cowardice, backstabbing and corruption, Obama would have been kept in his box – or impeached – and Clinton would be in jail, and our society would have its alpha and be stabilized. Instead, the crying boehners have given us a likely World War and a possible revolution against the coming fascism they allowed to be created in the US.

As for Trump’s problems: to paraphrase an old adage, ‘lay down with rino scum, and you wake up with political fleas.’ Had Trump not allowed the GOPe to sidle up him, he’d be flying ahead, and with a VP deserving of our votes and our trust. Instead, he’s got a saboteur.

Huma should not have any security clearances including a key to the restroom. Her husband is too much of a blackmail threat.