Anniversary of 1929 Hebron Massacre and Ethnic Cleansing of Jews

Anniversary of 1929 Hebron Massacre and Ethnic Cleansing of Jews 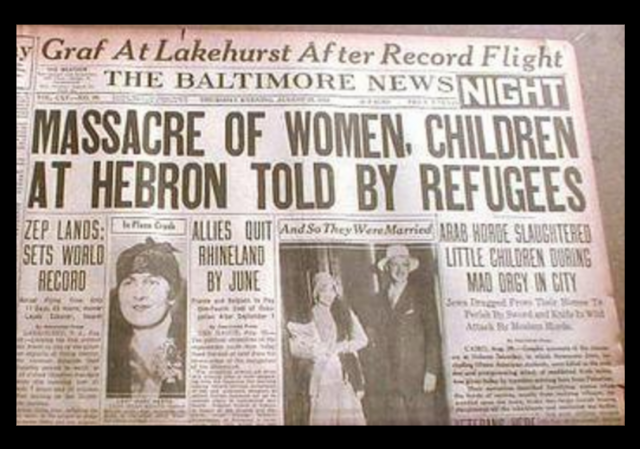 Hebron is a hot spot in many ways. Hebron and its immediately surrounding Arab areas are the single largest source of terror attacks during the so-called Knife or Stabbing Intifada.

It’s also a place where anti-Zionist and left-wing “liberal Zionist” American Jews love to gather to protest the Jewish “settlers” who live in a tiny section of the city. That section is under Israeli military control by agreement with the Palestinian Authority, with good reason. Hebron has a long history of violence directed at Jews.

Hebron also is the place of the Cave of the Patriarchs, which I visited in 2015. 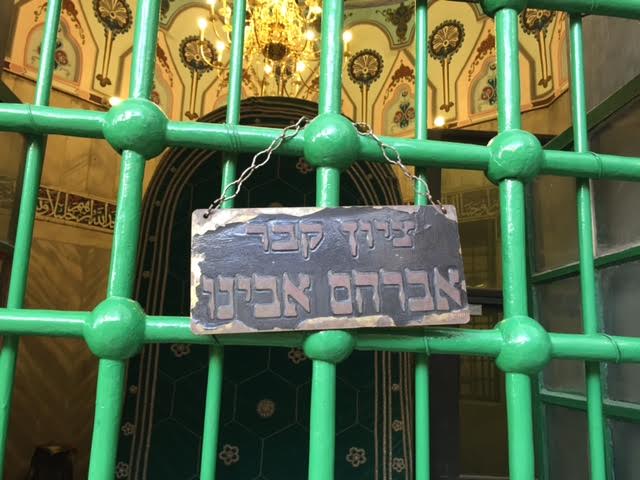 August 23, 1929, marked the beginning of two days of murderous rioting against the Jewish population of Hebron. More generally, it marked a week’s worth of disturbances in British-controlled Palestine, in which Arabs attacked and killed their Jewish neighbors, with there being some attacks by Jews on Arabs.

At the end of a week of violence, 133 Jews were dead, and 110 Arabs had been killed, nearly all of the latter by British security forces.

By far, the worst of the violence against Jews took place in Hebron, at the time a city of some 21,000 residents, of whom some 700 were Jewish and the remainder Arab Muslims. 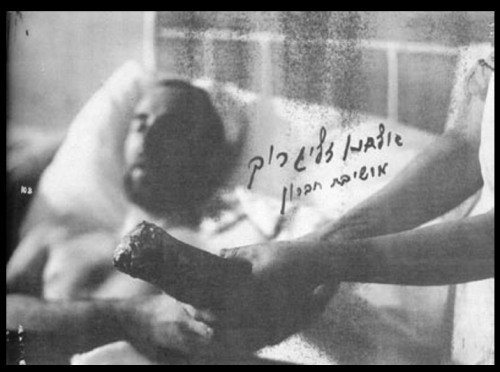 [Elhanan Zelig Roch, a student at the Hebron Yeshiva, lost his hand in the attack against the town’s Jews in 1929][via Wikimedia Commons]

As with attacks earlier in the 1920s, it was a Jihad against the Jews:

According to Dutch-Canadian journalist Pierre Van Passen who was in Palestine at the time, fabricated pictures of Muslim holy sites in ruins were handed out to Hebron Arabs as they were leaving their mosques on Friday, August 23, 1929. The captions on the pictures claimed that the Dome of the Rock was bombed by the Zionists. That evening, armed Arabs broke into the Yeshiva (Talmudic academy) and murdered the lone student they found. The following day, an enraged Arab mob wielding knives, axes, and iron bars destroyed the Yeshiva and slaughtered the rest of the students there. A delegation of Jewish residents on their way to the police station was lynched by an Arab mob. The mob then proceeded to massacre Hebron’s Jews — both Sephardi and Ashkenazi — who had lived peacefully with their Arab neighbors for years. With only one British officer supervising, the Arab police made no attempt to prevent the massacre.

The head of Hebron’s Ashkenazi community, Rabbi Ya’akov Slonim, had been on good terms with his Arab colleagues and offered his home as a refuge to Hebron’s Jews, believing that they would be spared. But the mob broke in and killed the Rabbi, members of his family and all those assembled there….

In total, sixty-seven Jews were killed and 60 were wounded. The Jewish community in Hebron was destroyed. 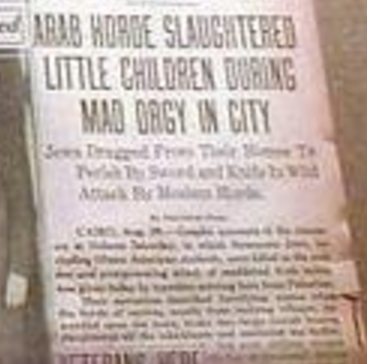 That Jewish community in Hebron would not be reconstituted until after the 1967 War, when Israel captured the area. In the same tiny section of town where the Jews were slaughtered in 1929.

We have shown this video several times in which an elderly Arab woman remembers fondly the massacre of the Jews, in which her family participated. Such joy and fond memories for her:

I wonder if this is one of the homes her father plundered:

This video documents much of what happened:

Another lesser-known (and somewhat perverse) aspect regarding the small population of Jews still living in Hebron is that they actually live in a neglected Jewish ghetto while many of the Arabs live in nice houses, paid for almost entirely by international donations of course.

I toured the Cave of The Patriarchs and the Dome of the Rock (the remnant of the Holy Temple) when I and my family visited in the late ’80s.
The tour guide took our group of Jews to the permitted areas.

Sharon made a HUGE mistake allowing the enclave in Gaza.

We need to have a 1 state solution and ‘invite’ the arabs to make ‘Aliyah’ to Jordon (by hook or by crook).

There will never be peace with the killers of the rightful owners of the Medinat Yisroel (the Jewish nation).

But the way I have it is the side who wears uniforms and insignia is right. And the other side is wrong.

Formerly, 7th Fleet. If anyone needs to check my bonafides.

To repeat the whole region is a caldron of intrigue is to restate the obvious.
From Generational Dynamics.
In the Kurdish border regions between Turkey & Syria Isis has a foothold with its claimed state that involves a number of strategic towns. Those towns are under assault by a combination of Kurdish & Assad forces trying to regain control battling Isis. Turkey worried about a potential Kurdish state is looking to prevent an impending Kurdish victory & is now training & arming a 1500 man force of free Syrian fighters. American forces are involved in support of the Kurd’s.

The American strategy is really quite clever. It pressures all the players & aids the Kurd’s. Obama had to give the go ahead. The risk is obviously that America will get drawn into a larger war involving all the players & the larger region.

What amuses me is all this is happening & the best & brightest among us are largely oblivious to what’s going on. All they have time for is their own petty self interests. Can you imagine a Hillary Clinton as commander in chief of such a volatile & dangerous situation she had a hand in creating?

[…] Prof. William Jacobson at Legal Insurrection has written an excellent recounting of the horrific events of the 1929 Hebron Massacre: […]

In 1967 the entire Arab population of Hevron fled, expecting retaliation for the 1929 masscre. That stupid man Moshe Dayan chased them down and begged them to come back.

When Meir Kahane first came to Israel in 1971, many of the murderers were still alive, and one of them was the mayor of Hevron. His big campaign at the time was to hold a Nuremberg-style trial. Seems like an obviously good idea, doesn’t it? But the Israel government wasn’t interested.

For decades successive Israeli governments have done all they can to prevent Jews from living in Hevron. The brave women who pioneered the renewed Jewish neighborhood blockaded themselves into a building for over a year, living without running water or electricity, with the army camped outside with orders not to let them back in if they left.

The ruins of the Avraham Avinu synagogue lay untouched for 20 years until a Russian refusenik started rebuilding it with his own hands. When the army came along and threatened to arrest him he laughed in their face. He’d done time in the USSR; did they think he was afraid of their Israeli prisons? He had been a world celebrity once as a prisoner of conscience; did they really want him to repeat that experience, this time in Israel? In the end they had no choice but to let him work, and the synagogue is now back in use. No thanks to any of the series of feckless prime ministers Israel has had, including the great Mr Begin.

And of course Netanyahu, the inexplicable idol of so many posters here at LI. The first thing he did after he was elected the first time was to give most of Hevron away to the Arabs. That’s why the community lives in such danger, because he turned the city over to the enemy. And when asked what would happen when they started shooting from the heights, that look right into the Jewish neighborhood he promised that at the first shot the tanks would go and retake the heights. Of course when it happened the tanks were nowhere to be seen. This is the Bibi who you all think is so great.

All the Jewish residents of Hevron want is simple justice, that we all take for granted; the right to live in peace and safety, to buy homes without having a corrupt court nullify the transaction (and not even give the money back), to let your kids play outside without having rocks thrown at them, and without international “observers” molesting them, the right not to be defamed by the mainstream Western press as some sort of white supremacist cult.