Last Days in The Jerusalem Suburbs

Last Days in The Jerusalem Suburbs

Where the clash of civilizations is real. 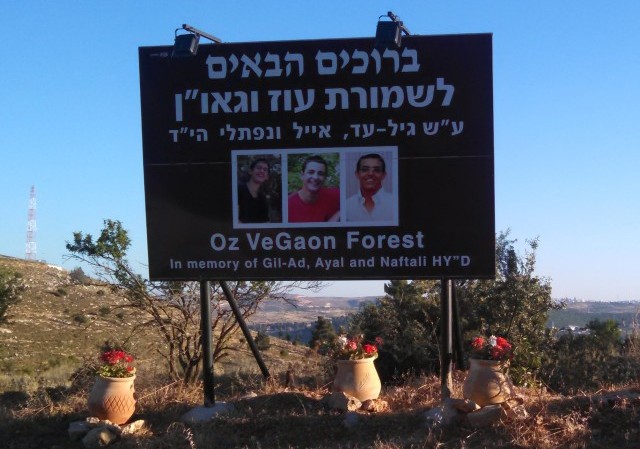 After an intensive hunt and crackdown on Hamas throughout the West Bank, they were found dead. The murderers months later were located and killed by Israeli forces.

Contrary to popular mythology, the kidnapping did not cause Israel to attack Gaza weeks later. Rather, the cause of the Gaza conflict was when Hamas started firing rockets from Gaza at Israel without stop.

While driving on the way back from Hebron, I saw a sign (Featured Image), designating a forest in the memory of the three teens. It is at the Gush Etzion junction in an area of settlements near where the teens were abducted.

The visit to Hebron was quite interesting.

Hebron had the oldest continuous Jewish community in the world — dating back several hundred years — until Arab riots in 1929 killed 67 Hebron Jews and ethnically cleansed Jews from the city.

Yet when Jews reestablished a presence in 1967, it was called an illegal settlement by many in the international community. For an informed discussion of the actual legal status of “settlements” see Eugene Kontorovich’s post and paper, Business with occupied territories, Orange telecom, and the French approach to international law.

Heavy military guard is required to keep the Jews who live in a small section adjoining the Cave of the Patriarchs safe. It doesn’t always work: 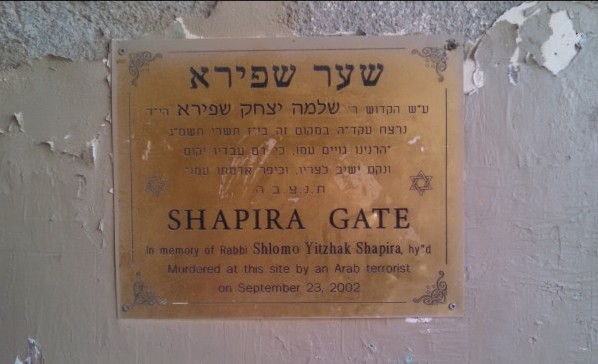 We saw tall metal shields from sniper attack in many places, and there were soldiers posted at almost every corner and vantage point. 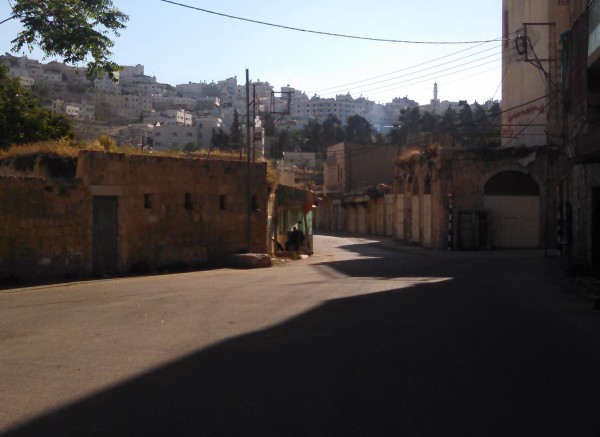 The soldiers often are harassed by international activists who come up to them and photograph and video tape them. 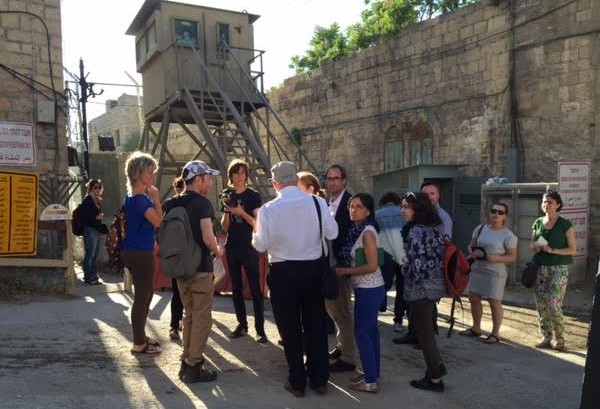 Jews and Arabs are kept apart on certain streets in this small enclave for safety, not because of a desire to segregate people.

In 1994 Baruch Goldstein killed 29 people at the Muslim section of the Cave of the Patriarchs.

In Hebron I visited the Cave of the Patriarchs, which has separate Muslim and Jewish entrances and sections, divided by solid metal doors and bulletproof glass. 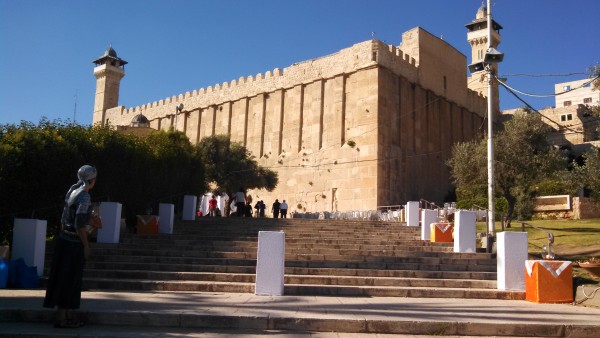 Israeli school children were touring the site when we were there: 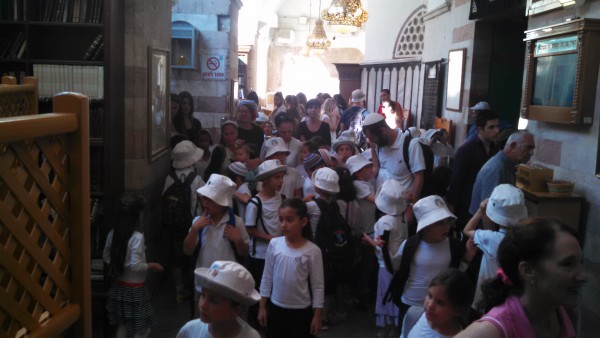 Here is a view of Hebron from the steps: 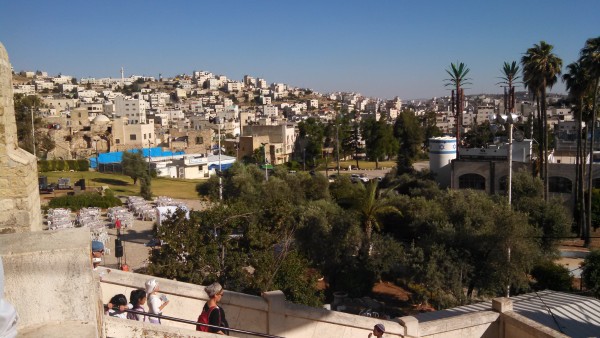 We also visited the HaMirpeset lookout point on Har Gilo, just outside Jerusalem. We were accompanied by Major Nadav, the same IDF legal officer who spoke at Cornell Law School last semester on issues of the law of warfare and Israel’s extensive efforts to comply with international law in targeting Hamas military assets hidden among civilians. 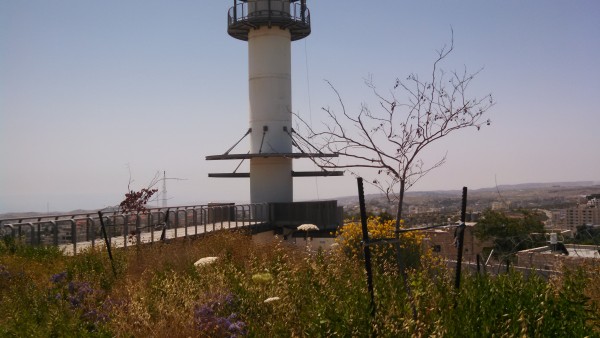 From the lookout point, you can see the Gilo section of Jerusalem, which during the Second Intifada was subjected to sniper fire from neighboring Palestinian neighborhoods: 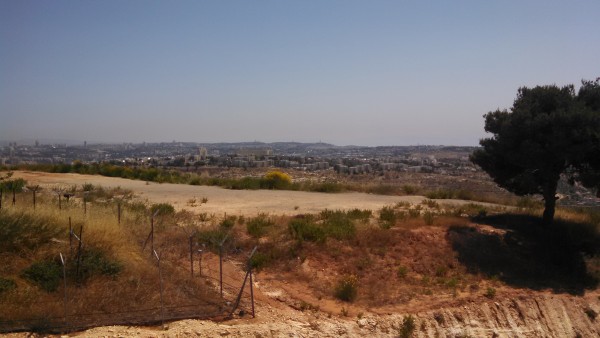 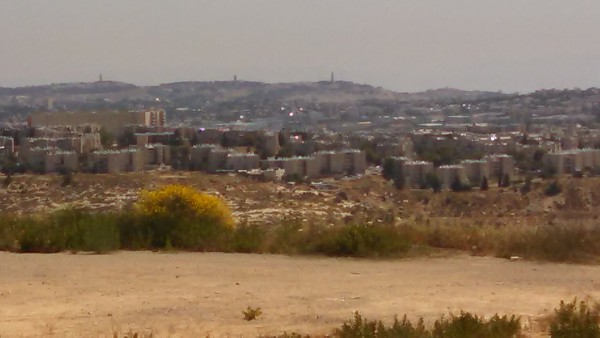 The lookout point also is on the edge of the security barrier, which here is a wall but for most of its length is a fence. 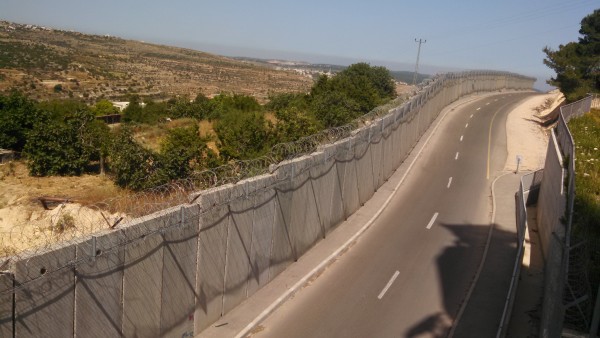 We accompanied Major Nadav to the civil administration headquarters for Judea, on a military base where many of the legal advisors are located. It is just next to a check point leading into Ramallah, and Ramallah is very visible from the base: 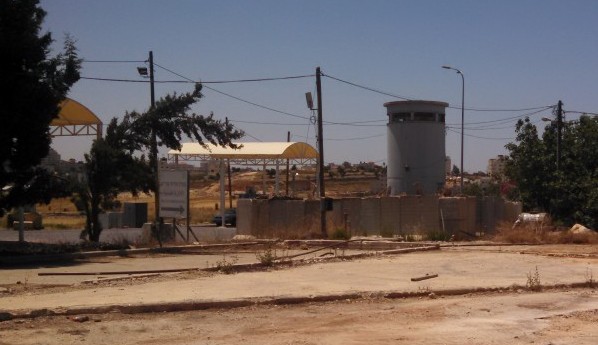 The checkpoint is not to prevent Palestinians from entering Ramallah, but to prevent Israelis from entering Area A, which is completely under Palestinian Authority control. The policy was implemented after the notorious lynching of two non-combatant Israeli reservists who mistakenly took a wrong turn into Ramallah.

And so ends our trip to Israel, as we fly back tonight.

I have not been able to post about everything, but I’ve tried to hit the highlights.  You can scroll through the posts at the Israel Trip 2015 Tag.

There will be at least one more post after our return — about our meeting with the families of Edward Joffe and Leon Kanner, 21-year old students killed in the 1969 SuperSol Supermarket bombing in Jerusalem by Rasmea Odeh. The most emotional event I’ve ever had as a blogger.

What does HY”D mean? It’s on the billboard and the Cave of the Patriarchs sign.

HY”D is a traditional Jewish honorific for the murdered dead with a dual meaning — “May HaShem avenge his/her blood” and “Martyred Jews” or “Jews killed by anti-Semites”.

“HaShem” means “God” in an informal sense. It is common Jewish practice to restrict the use of the names of God to use in a liturgical context. Therefore, many Jews in Israel, even when not speaking Hebrew, will call God “HaShem”, which when literally translated from Hebrew means “the Name”.

So HY”D, loosely translated, would mean, ‘May God avenge the blood of this/these murdered/martyred Jew(s).’

Thank you for the excellent explanation. Also, I forgot to thank Prof. Jacobson for posting the photos and videos and the informative explanations.

Somebody should send that photo of the wall to congress.

To live amongst these savages must be so hard for the Israeli Jews.