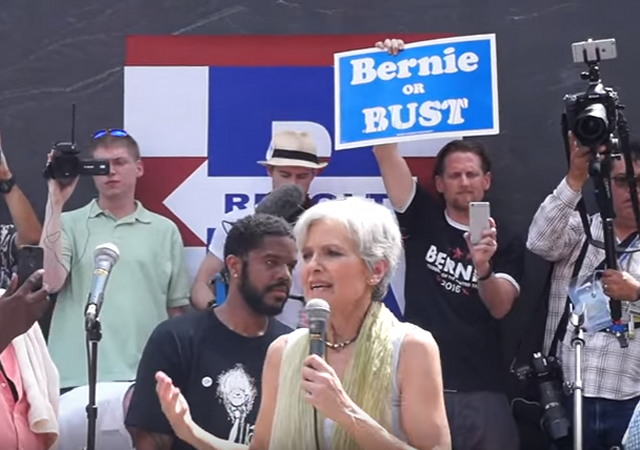 Now that Hillary Clinton is the official Democratic nominee, a significant number of Bernie Sanders supporters are gravitating to Green Party candidate Jill Stein, who seems happy to have them.

The question is whether support for Stein will have any impact on the outcome of the election and if she’s capable of picking up where Bernie left off.

Clare Foran writes at The Atlantic:

Can Jill Stein Lead a Revolution?

Jill Stein takes public transportation to the Democratic National Convention. On the day after Hillary Clinton made history as the first woman to win a major party presidential nomination, the Green Party presidential candidate is on the subway en route to the Wells Fargo Center. Adoring fans spot her on the way over and demand selfies. A heavily tattooed woman complains to Stein: “It’s been a Hillary party the whole time. It’s like brainwash, like waterboarding. It’s awful.”

Stein is in high demand. The populist progressive tells me that after Bernie Sanders endorsed Clinton two weeks ago, effectively ending his insurgent campaign for president, a lot more people started paying attention to her campaign. “The floodgates opened,” Stein says. “I almost feel like a social-worker, being out there talking to the Bernie supporters. They are broken-hearted. They feel really abused, and misled, largely by the Democratic Party.”

It’s hard to miss the anger and frustration. At the start of the week, Sanders supporters took to booing the mere mention of Clinton’s name at the convention. Dozens of die-hards even staged a dramatic walkout after Clinton won the nomination. Stein insists that she feels their pain.“I think the Democratic Party is really struggling right now,” she says. “It’s become a zombie party.”

The Green Party candidate styles herself as a successor to the Sanders campaign. And she has been making the rounds in Philadelphia in the midst of the Democratic convention. When Sanders supporters protested Clinton’s nomination, Stein was spotted in the crowd. On Tuesday, she showed up at a Bernie-or-Bust rally in downtown Philadelphia, reminding the crowd: “Whatever happens, you know my campaign is here. We are going to continue this movement.”

Stein’s speech suggests she really wants the job of being the new Bernie:

This election is certainly historic. Historic for the most corporate donations & most unfavorable “front running” candidates of all time.

If liberals claiming Green values support us instead of attacking, we'll rise over 15% in polls, get in debates, & win like Bernie would've.

We're the wealthiest nation on the planet, we can afford universal health care. We can't afford bloated military spending. #Priorities

Why wouldn’t she win Bernie voters? She sounds just like him.

We’re wealthy???? Really??? We have 19 tril in debt from irresponsible, unconstitutional spending. How on earth does she think that the military is unaffordable but universal health care is. Has she actually compared the numbers for the military and entitlements? She’s another moron saying things that she knows no one will fact check. We can’t afford the current gov and won’t be able to afford hers either.

More power to Ms. Stein. May she do to Hillary what Perot did to H. W.!
Trump 2016!!!
And yes, I did deliberately post this to get under you moron #never T-rumpers skin.
Let the down votes rain down like a cloudburst! It’s all you #never T-rumpers have!

Jill Stein is a lot like Trump. She’s mastered Social media and she’s quite the Twitter troll.

Collectivists left, right, and even lefter…!!!

This is what you get when you vote your feelings (or your insanity in some cases), instead of thinking.

I find Dr. Stein cute. She’s got curves. She doesn’t hide it.
Of course there are some “men” who prefer the flat chested, diesel dyke look of a Hillary Clinton. We don’t talk about those kind of men. They prefer women that come with a strap on.

This is going to make it tough on the NeverTrumpers. Do they continue to help Hillary, or go full blown openly Socialist and back Stein?

Will she inherit The Revolution?

Well, is she selling the same product?

Bernie’s attraction seems to have been the promise of free stuff. More specifically, stuff which the Sandersnistas considered important.

Although it’s certainly prominent on the general socialist wish list, I’m not sure that “universal health care” ranks among the freebies they’d think are terribly important. They’d be more excited about, say, elimination of student debt.

Maybe she should promise them free phones.