Dialogue instead of violence and anger. 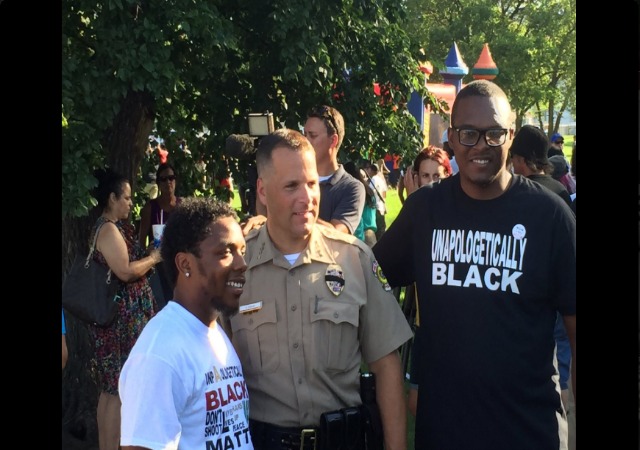 Instead of a protest, Black Lives Matter activists in Wichita, KS, joined their local police department for the First Steps Cookout to open dialogue and bring together the community. Both sides decided this was a better option, especially after police shootings in Dallas, TX, and Baton Rouge, LA.

We are having a great time with everyone at McAdams Park. #thatsmywichita pic.twitter.com/V3Z8s2za9F

It's not pretty. But the Whip and Nae Nae were hit by none other than me! #thatsmywichita -OM pic.twitter.com/AS73lZQ5dY

BLM planned a protest, but Chief Gordon Ramsay (no, not the celebrity chef!) persuaded them to attend the cookout. Pictures show that all had fun and had a positive impact on the community:

A.J. Bohannon had organized the BLM protest, but decided to help the Wichita PD with the cookout instead:

Ramsay held a question and answer forum with the citizens:

One man says he viewed the cookout as an attempt to take attention away from real cause of the tension between some citizens and police.

Ramsay says his department is committed to making things better.

“This isn’t something we’re going to change overnight or tonight,” he says. “It’s just going to take continual effort on everybody’s part. And work on policy changes, relationships. And that’s what’s going to get to the heart of the issues.”

Resident James Holland enjoyed the cookout and has never seen anything like it before:

“If I were to ask you the question when was the last time you saw this happen, you would say never because it has not happened,” said Holland.

Holland is hopeful the cookout will move the community in the right direction.

“I believe that this event is going to show our community that you can voice your opinion without being radically offensive,” said Holland.

Businesses and residents donated food and supplies when they heard about the cookout. The Wichita Wagonmasters helped cook the food so the police “could mingle and visit with citizens.”

In a world full of hate it's about time we remember what love is ???#ThatsMyWichita #1stStep pic.twitter.com/tapG0RI7Wg

It's a surreal feeling being part of the discussions here at McAdams Park tonight #thatsmywichita pic.twitter.com/nDkN49K0SQ

#BlackLivesMatter leaders and @WichitaPolice meeting over dinner with big turnout from community at McAdams Park. pic.twitter.com/HrgZCcnv9P

The #firststepsbbq is getting started. Come out to McAdams park to grill out and get to know your local officers. pic.twitter.com/x8mIkcs5qR

What does it mean to be “Unapologetically Black” mean?

Sure, pro-choice people have no principles. Many of those working as abortion providers have more principle and more courage in their little finger than you do in your entire body.

How much principle did it take Trump to suck millions out of Atlantic City Casinos, stiff small contractors, creditors, stockholders and declared bankruptcy? That is not opinion. It is fact; as documented in the legal record.

Well without more information, it means nothing more than if I wore a t-shirt that said, “Unapologetically peach” (which my little children declared was our “color” based on the Crayola palette).

Which I may trademark.

Next, we will recognize individual dignity, perhaps even the intrinsic value of human life. In the meantime, there is the State-established Pro-Choice Church with [class] diversity mongering (e.g. racism), abortion rites (i.e. “final solution”), and channeling Mengele (e.g. Planned Parenthood). Anyway, baby steps.

Do you ever bemoan the children killed in a drone account? i am not claiming equivalency. But there are dead babies as a result of our collective behavior. They don’t count?

The “ammo line” she refers to is the line at the local Wal-Mart where she spends considerable time for her periodic ammo purchases.

Very often a great read, and this one is especially good.

Thank you Mary, excellent article. May it be built upon.

It’s odd the timing. The past 2 days the chief prosecutor of Twin Falls Idaho, Grant Loeb’s & I have had a productive conversation over an ugly incident there involving a sexually charged assault by 3 Muslin boys on a 5 year old local girl. To say it’s been a challenging time for all involved is an understatement. It puts Twin Falls authorities in a lose – lose situation to say nothing about the girl & her family.

My initial contact was challenging & assertive. I asked pointed questions & expected no response. To my surprise he did respond. He was polite & professional & demonstrated a tone that was responsible. I replied in kind. We came from similar backgrounds. My dad was a county judge in small town South Dakota. I grew up in the Stanley county courthouse.

So we bonded to a degree. He’s gotten a lot of hate for doing his job. I can tell he appreciated a break from what he’s been getting. We agreed on most points.

I suspect he’ll be better now with the family who’ve rightly been guarded & suspicious of the established system. Hopefully our extended byplay may result in a release of some of the tension’s.

Hopefully a similar process has been set in motion in Wichita Kansas.

This type of community is the exact opposite of No-Go Zones.

Everything will go along swimmingly until the cops have to arrest one of them.

Why is it that the established community has to adjust to the desires of a minority that goes against the tradition of the community? Why is it that a 13% of the population that commits 80% of the crime has to be treated like victims? Why do we have to “Reach” out to them when they should be bending over backwards to be part of a safe and successful community? I’m sorry that I can’t understand this stuff, but I grew up where you had the responsibility to fit into the community, not the community adjusting to you. These people want to be treated like victims when they are not trying to fit into the culture around them. If they want to live in a tribal fashion and be lawless then they need to find a new home. I do not know where that is except the Middle East.

I commend both groups for trying.