Viral photo of 3-year old confronting border police is not what it seems. 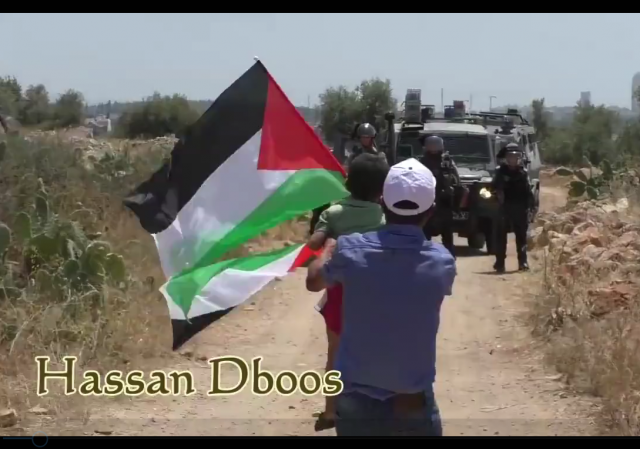 I have documented how some Palestinians, such as Bassem Tamimi, have created an industry of exploiting children for the cameras in a very dangerous way.

They have the children confront soldiers with the cameras rolling, hoping for a reaction and viral video or image. The video and images are crucial in the propaganda war on Israel.

Here is another example. A young child, maybe 3 years old, was photographed heroically confronting Israeli border police. It had all the hallmarks of a viral shot, tweeted by anti-Israel Twitter account Abbs Winston and retweeted by “Hamas Lawyer” Stanley Cohen and over 150 others: 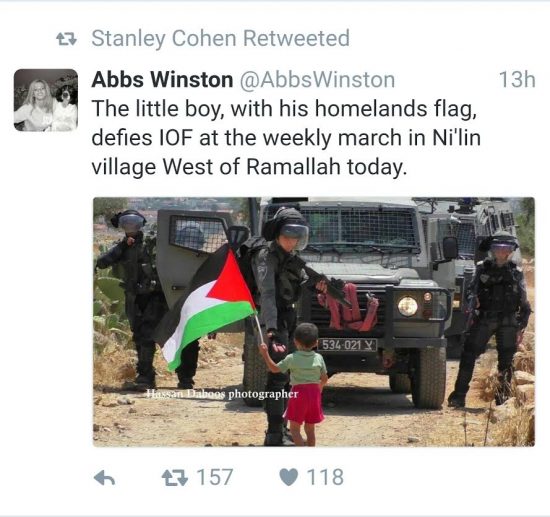 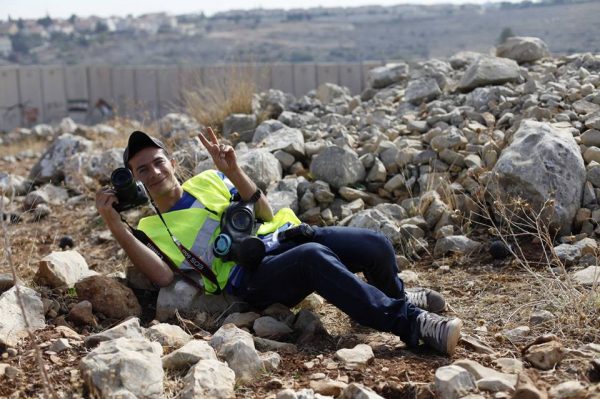 But the image of the child is not what it seems.

Rather than a brave child confronting the Israelis, the video shows a man, presumably the father, carrying the child toward the border police (see Featured Image at top of post), and pushing the child forward: 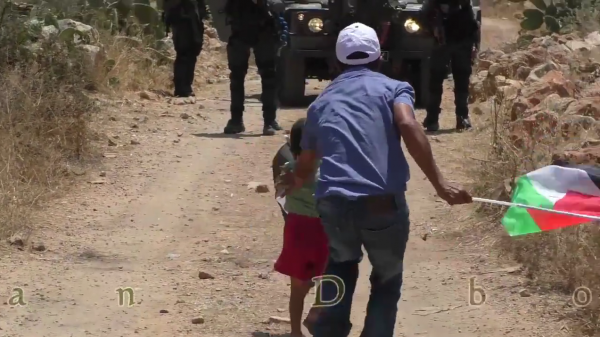 The child then reaches the border police, who make no moves toward the child as he waves a flag. The photo used on Twitter is on the photographer’s Facebook Page. It shows a border policeman reaching towards the child, but when you see the video, you will see that this is not a hostile gesture at all, the child touches hands as if in a “high five” motion: 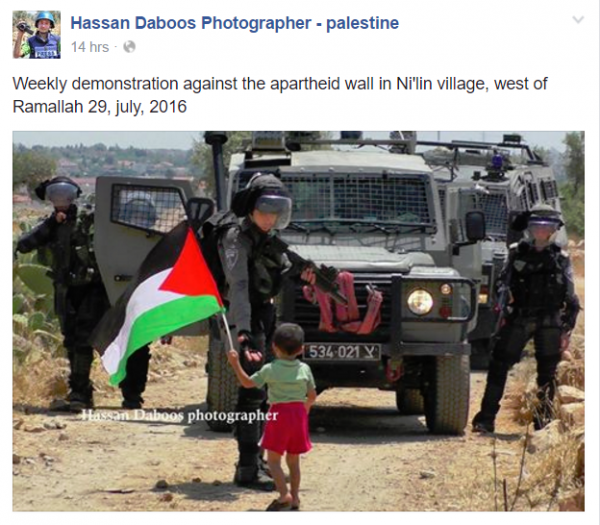 The father then appears to be yelling instructions to the child, who picks up rocks, seemingly not knowing what to do with them, tossing the first rock underhanded away from the border police: 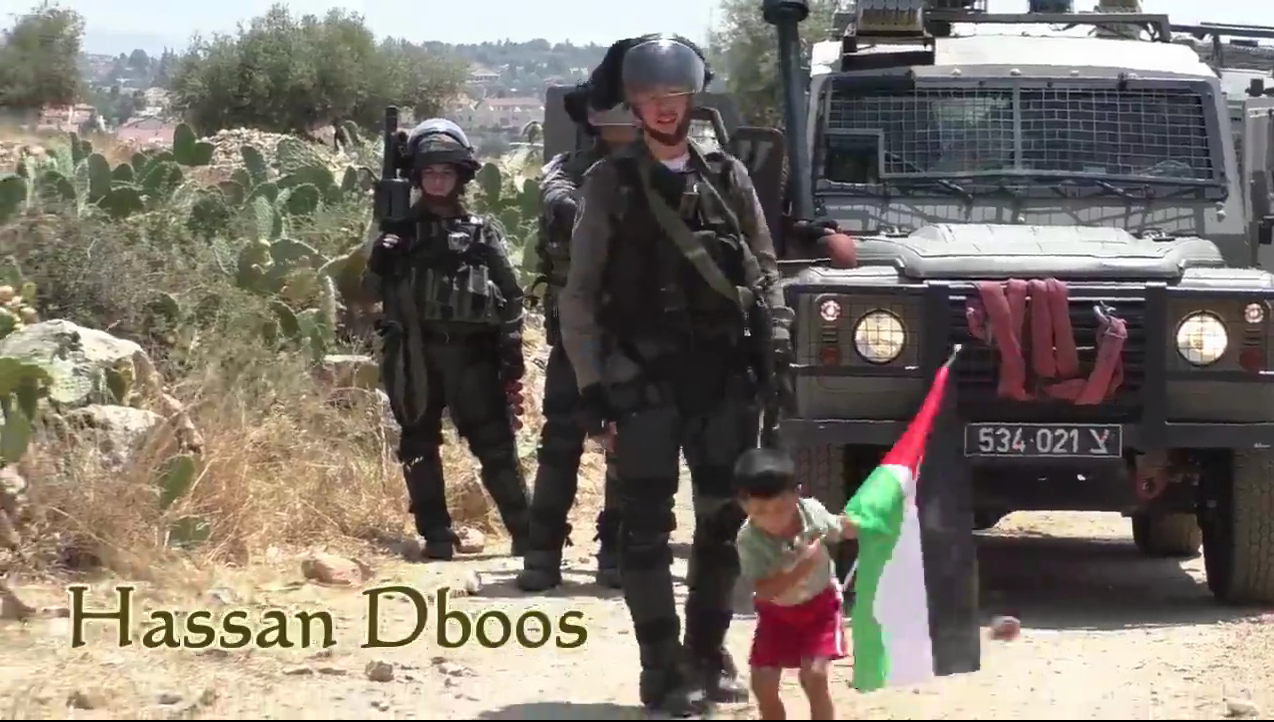 The child then looks back at his father for instructions: 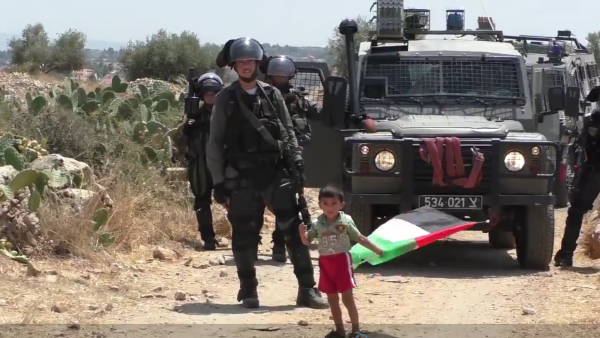 After more instructions are shouted, and the child picks up and drops small rocks, the child finds a larger one that he throws at the border police, though it doesn’t go very far: 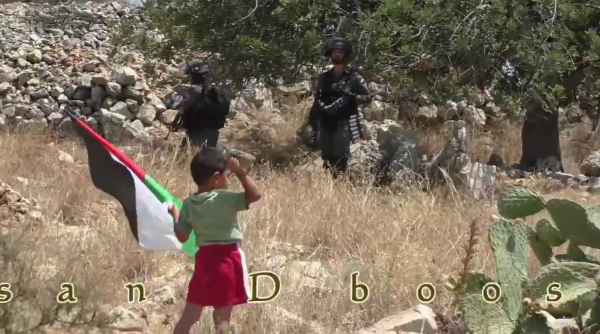 The child throws some more small rocks away from the soldiers, before sitting on a large rock, at which point the video ends. 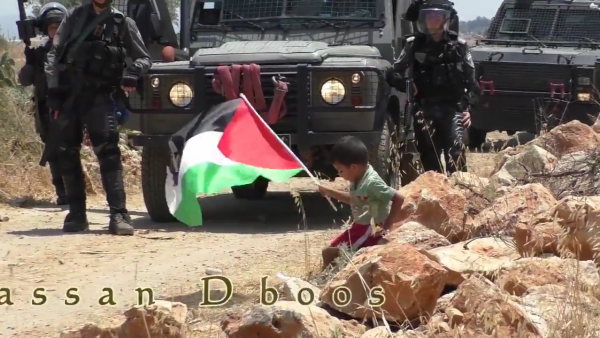 (added) A Facebook user who appears to be from that village identifies the child and brags that the child is confronting “occupation soldiers” (h/t Bob Knot Twitter): 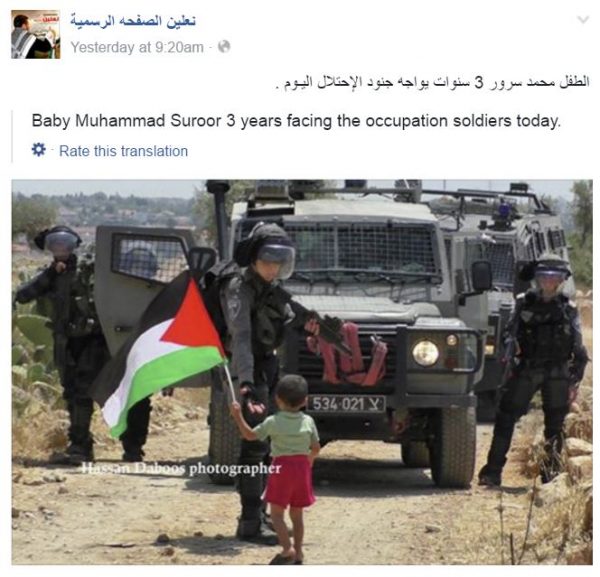 MUST WATCH: A Palestinian man yells at IDF soldiers, demanding they kill his child so it can be captured on video. The soldier instead shakes the young child’s hand. The father then tells his child to throw rocks at the soldiers.. 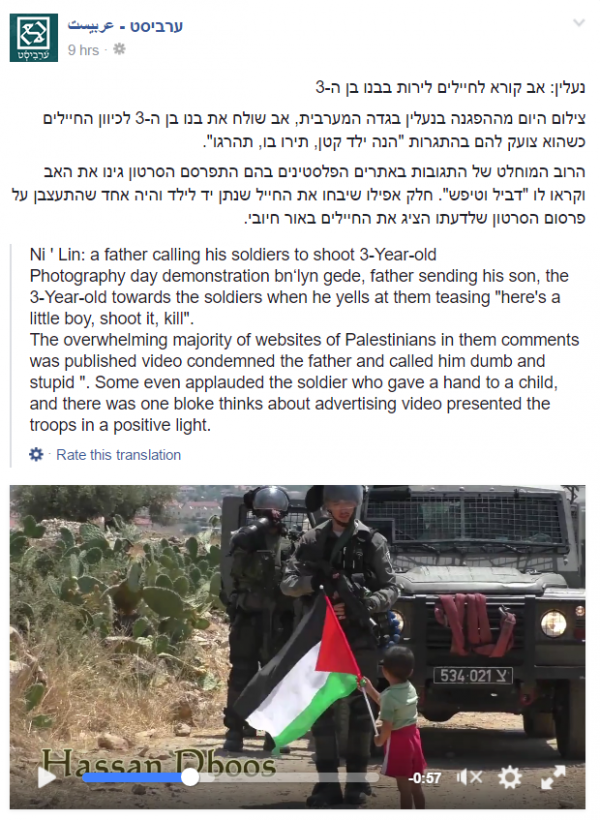 (added) And more confirmation that the father was taunting the police to shoot the child:

Regardless of the translation, this is just another disgusting exploitation of young children for the cameras in the cause of Palestinian propaganda.

How long before that photographer and father get invited by Jewish Voice for Peace activists to speak to third graders in the U.S., like Bassem Tamimi?

A Palestinian man yells at IDF soldiers, demanding they kill his child so it can be captured on video.

Missed opportunity. One of the soldiers should have shot the father.

The Pallys don’t exploit children; they exploit Western bourgeoisie sentiment that privileges a child’s welfare over that of an adult. After all, the images are intended for us, not for Gaza or the West Bank.

There have been numberless interviews of Pally mothers bragging in their grief that their 15 year old son, who just blew up himself and 20 civilians, is better off as a dead martyr than a live boy.

They regard their children and themselves as no more than instruments to appease their Moon God’s insatiable appetite for human life.

As a Middle aged white Christian former NYer this Pallywood non-sense really gets on my nerves. I dismiss all MSM stories inspired by Pallwood. I automatically have a knee jerk reaction and want multiple punitive measures initiated against the Palestinian militants.

It is my belief that I am not alone with my viewpoint in my demographic.

“Ni’lin: A father calls to soldiers to shoot his 3 year old son”.

Photos from today from Ni’lin in the West Bank. A father sends his 3 year old son towards soldiers as he shouts at them provocatively “here’s a little boy, shoot him, kill!”.

The overwhelming majority of responses on Palestinian sites which published the video condemned the father and called him “stupid, an idiot”. some even praised the soldier that gave a hand to the child, and there was one who was annoyed at publication of the video because it put the soldiers in a positive light”.

So where is the Un commission on Childrens’ Rights or whatever. I am sure there is one.

Makes me want to have such unprincipled savages as partners in a peace negotiation.