Venezuelans cried when they saw stocked shelves at Colombian stores 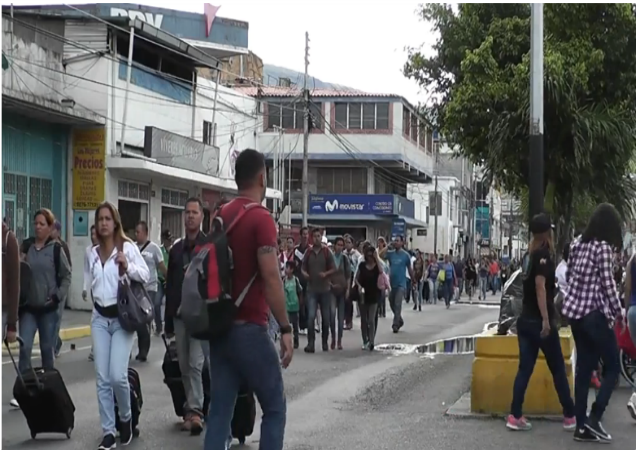 Opposition leader Jesus Torrealba said election officials confirmed the validity of some 407,000 signatures that were under review, more than double the 200,000 signatures required.

“There is no formal, legal or technical excuse for them not to immediately convoke the next phase” of the referendum process, Torrealba told The Associated Press.

Once the National Election Council confirms the validation, the opposition can begin the next step:

If confirmed, the opposition can begin collecting the roughly 4 million signatures needed to hold the referendum. If a vote is held, the president would be removed only if the number of anti-Maduro votes exceeded the 7.6 million votes he received in the 2013 election. In December’s parliamentary elections, opposition candidates mustered 7.7 million votes even and currently control the legislature.

The opposition claims Maduro’s socialist policies have driven the country into a downward spiral. People have no food, Maduro has taken over all, but one of the food producers, crime has gone up, and there are no jobs.

The news comes only a few days after Venezuelans went to Colombia to buy food. Witnesses said some people cried when they saw food and basic necessities. The sight of milk and toilet paper overwhelmed the people, who cannot even buy a small package of flour in Venezuela:

After the border opened at 6 a.m., thousands streamed across dragging empty suitcases that they hoped to fill with produce. As the frontier was only open to foot traffic for a few hours, most immediately boarded buses provided by local authorities and headed to the shops in downtown Cucuta that had opened early for them.

Most Venezuelans in the Los Montes supermarket loaded up on rice, cooking oil and maize flour. Some bought toilet paper, sanitary towels, sunblock, soap and shampoo.

“I’ll give birth sooner than I’ll find shampoo in Venezuela,’’ said one woman who was weighing whether to buy a Pantene brand shampoo, adding that she was two months pregnant.

“To get a kilo of rice, you have to queue for six to eight hours, exposing yourself to mistreatment, people pushing, jumping in line, then when you get to the front they close the store and say everything’s sold out,” said Rosalba Duarte, a nurse from the town of Capacho who said she began queuing at the border at 3 a.m

I guess it’s safe to say Maduro is no Erdogan when it comes to a totalitarian grip on power and position.

it didn’t “explode in their face”…

it performed as designed

within a generation, they’ll vote for the same shit, expecting a different result.

Just like we return to Republic administrations thinking it will mean a reduction in taxes and regulations; a controlled border; and shuttering of AMTRAK, the Dept of Ed, the Dept of Energy, the National Endowment for the Arts, and other promises made since the Reagan Administration.

Don’t count on it. Maduro already called on the Supreme Court to dissolve the General assembly and he will probably get it. Without Assembly there will be no recall.

Of course he will get it. The Supreme Court was stacked before the Assembly was installed.

I wonder how much of that food they were allowed to keep once they got back into Venezuela and away from the cameras.