That Time the European Union Tried to Ban Cinnamon Buns

That Time the European Union Tried to Ban Cinnamon Buns

Saving the world, one cinnamon roll at a time 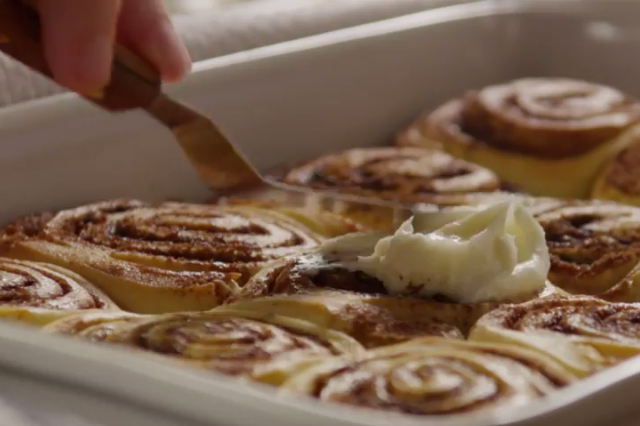 As more information is revealed about the extent of European Union regulatory inanity in the wake of the #Brexit victory, the more the Leave voters have been vindicated.

Kemberlee blogged that EU regulations were set to ban traditional tea kettles and toasters that are essential appliances in the British kitchen. In 2013, the bureaucrats put restrictions on cinnamon content of traditional Danish pastries:

Brussels has sparked outrage in Denmark by proposing to outlaw their traditional pastries.

Christmas festivities have been dampened in Copenhagen by the prospect that this could be the last year its citizens will be able to eat their kanelsnegler or cinnamon rolls.

The end to the beloved pastries comes from EU limits on the amount of coumarin, a naturally occurring toxic chemical found in the most commonly used type of cinnamon, cassia.

I would now like to conduct the chemical risk assessment that Brussels has obviously failed to do:

So, here are the rules that Brussels set-up that impact Danish Christmas kanelsnegle or cinnamon rolls:

Under Danish interpretation of the EU legislation the amount of cinnamon in “everyday fine baked goods” will be limited to 15mg per kilo meaning a ban on Kanelsnegler pastries, a winter favourite in all Nordic countries, which take their name from their coiled snail shape.

The move has provoked a furious reaction from Danish bakers because neighbouring Sweden has decided to save their spicy pastries, known as Kanelbullar in Swedish, by classing them as a traditional and seasonal dish with a permitted cinnamon level over three times higher, at 50mg per kilo.

“It’s the end of the cinnamon roll as we know it,” said Hardy Christensen, the head of the Danish Baker’s Association.

Let’s process this data for for a few minutes. We will assume that some eats the pastry that is 50 mg of cinnamon per kilogram of pastry and each pastry is about 3 ounces in weight.

A proponent of #Brexit states the obvious:

“An average person would have to eat so many Danish pastries in order to be affected, they would certainly die of obesity before being hurt by a low level of cinnamon,” Paul Nuttall, the deputy leader of Ukip, told Telegraph.com. “We don’t need the nanny state or the EU to tell us what do and certainly not how many Danish pastries we should eat for Christmas.”

Intriguingly, there are reports that regular consumption of cinnamon may actually reduce blood pressure.

So does leaving behemoth bureaucracies.

The leader of the far-right Danish People’s Party says Denmark should now follow Britain’s lead and hold a referendum on its membership.

Party leader Kristian Thulesen Dahls said if the Danish parliament cannot agree on reforms with the EU a referendum could give Denmark a new opportunity.

Danes were able to find a way around the spicy ban by simply reclassifying their beloved pastry:

Eurosceptic politicians cited the threatened bun ban as an example of EU meddling, and Danish media have dubbed the contentious issue “cinnamon-gate”.

But on Monday the Danish Bakers’ Association announced it had found a way around the EU limit of 15 milligrams of per kilogram of pastry — reclassifying cinnamon rolls as a traditional or seasonal food consumed only occasionally.

“After around six months’ work we have agreed that the cinnamon roll and similar products are (considered) traditional Danish pastries and as such can contain up to 50 milligrams per kilogram of finished product,” it said.

In a bureaucracy; cinnamon, soda-pop, and trans fats are toxic but abortions don’t harm anybody.

Nope, they don’t and the funny thing is that I heard that Texas had a whole bunch of unnecessary regulations concerning abortions. You need a surgical center even if no surgery is being performed. The dosage of the medications is determined by the state rather than the doctor.

I could go on, but you get the idea. I think they call the unnecessary impediments TRAP laws.

I don’t know if you have any idea how an abortion is done, but it is invasive surgery. It leaves the woman open to infection. Abortions have a non trivial death rate to the women involved, and a much higher rate of serious infection.

But abortion is the sacrament of the Left. Nothing may be allowed to interfere with Holy Abortion. The women involved, be damned.

Great iconic European foods that have been produced for centuries have been ruined by the EU.

How? Over regulation and a crazy emphasis on sanitation. EU required that producers move production to tile and stainless steel facilities.

Foods…especially fermented foods like cheeses and meats…simply could not be produced to the same flavor standards they’d been made to for centuries. The microbiology of old “unsanitary” production locations could not be replicated.

People and food microorganisms have been happily co-existing for centuries, but not in the EU.

I am reminded of the “runny egg” controversy in New Jersey about 30 years ago. State health dept. nannies decided that sunny side up eggs with “runny” whites were under cooked and therefore a danger to the public health. They proposed a regulation which would basically require all fried eggs to be cooked “over easy” before being served. Jersey diner denizens revolted against this banning of one of their favorite breakfast choices and the state quickly relented.

I take cinnamon (Ceylon cinnamon, not cassia) for blood pressure and glucose control. If I took the three capsules a day the bottle recommends, which I almost always forget to do, I still would be at only 30% of the level that “may” cause reversible trouble in some people — if it were cassia cinnamon, not Ceylon. You’d have to eat one incredible number of cinnamon buns to be affected!

Or, they could use Ceylon cinnamon which has vastly lower amounts of coumarin.

Americans don’t realize that they fall under EU regulations as well. Take ROHS [Restrictions on Hazardous Substances] for example. Any U.S. manufacturer who wishes to sell products to Europe has to comply, so all of them do. This is the reg. that banned lead from solder and brass plumbing fixtures, and cadmium and hexavalent chromium as metal coatings. So now our electronics are are assembled with less reliable solder joints, our steel rusts, and our aluminum corrodes. And we didn’t vote for any of this.

..and if a faucet installed before all this EU bulls**t infested us begins to leak, you cannot get a repair part. The cartridges for the lead-free faucets will not fit the old, dangerous ones and no one is going to waste their time making retro lead-free parts for old stuff. You get to buy a whole new faucet.

I am still amazed that I have passed through those first 60 years of life alive… being exposed to all these deadly hazards that the past 10 years have discovered and saved me from. Amazed, I tell you!

The “civilized” world is sanitizing itself to death.

You are always subject to the regulations of the place you sell to. But you are not forced to sell there. You can comply with only US regulations, which are as bad or worse, by only selling in the US.

This article made me think of the Louis CK Cinnabon sketch… hilarious: https://youtu.be/fp-j72ALHHs

[email protected] By coincidence I can look across to the table and see the remaining two of four Swedish kanelbullar that I laid out this morning. The back of th3e package says it is 15% kanelfyllning, neither myself nor my wife are worried.

There are so many stupid regulations they hoist upon us, and there is nothing we can do.

everyone knows those things are mostly sugar and fat

As a research chemist and professor of toxicology, I can assure that many of the methodologies that are used to perform toxicological studies are highly flawed, but are still used in an effort to “protect the public”. One of the major flaws is that they assume a liner dose response curve at very low concentrations and that the human body possesses no ability to heal itself.
>
For example, if an exposure of 1 gram will cause 50% to die, then they assume that an exposure of 1 milligram (1/1000 of a gram) will result in 50/1000% or 0.05% will die. It is the equivalent of saying that if 100% of all 747 jumbo jets fly at 150 mph, then 10% will fly at 15 mph, 1% will fly at 1.5 mph, and 0.1% will fly at 0.15 mph. What the regulatory agencies then does is to claim, in the name of protecting the public, that, since there are 10,000 747 jumbo jets in the world (I know there is not that many, this is simply an example.), 0.15% or 15 of the 747 jumbo jet population should be able to fly at the speed of 0.15 mph and, therefore, we must regulate airplanes at this low speed. Logic or real experiments to show this is not possible do not count because it is a scientific impossibility to prove the absence of anything and, therefore, you cannot prove that those 15 planes will not fly at this speed.
>
While this sounds scary (not from the airplanes flying at this low speed but the illogic used), it gets worse because these types of calculations are used in virtually every single exposure regulation passed by OSHA, EPA, and others.
>
How well does this work in the real world? Shorty after the Chernobyl disaster and after all those who suffered sever acute exposures to radiation died, many agencies predicted that there would be an enormous increase in cancers and deaths throughout the region for years to come. To date, there has been no demonstrable increase, however slight, in cancers or death rates in that region’s population.
>
Despite this example, as well as many others, the regulatory community adamantly refuses to change for, if they were to do so, they would lose too much power over the people with whom they are tasked to protect. In other words, these protective restrictions to minimize the exposure of people to “bad stuff” is based on the concept of maintaining the agencies power and has little to do with actually protecting the public.

Times Beach, IN was evacuated over such nonsense.