“What bugs me the most are the hair puppets.” 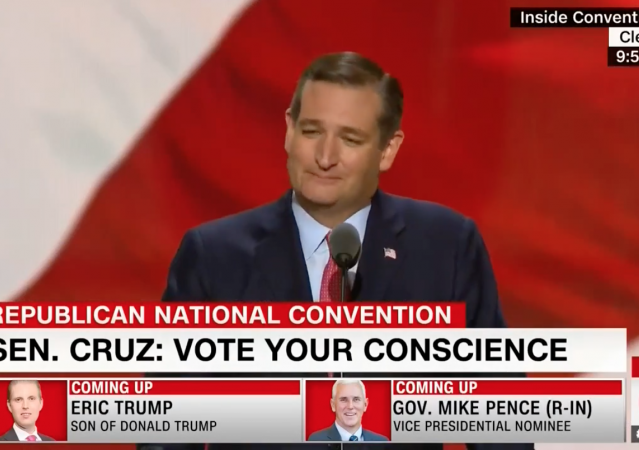 A little levity to kick off your evening — yesterday, the good folks of Bad Lip Reading released an abbreviated and hilarious rendition of Senator Cruz’s controversial RNC speech.

If you’re not familiar with Bad Lip Reading, they dub over clips of all kinds (not just political) with nonsensical garble.

“Last summer I was with Trump and we were by the pool and he was feisty, so he called for a happy child race. Then I punched his rib. Oh hey, someone’s giving me the hairy eyeball. Do you have a problem? Hey, I’m talking to you, Blondie,” says BLR Cruz.

It continues, “something you don’t know about Mr. Trump, the guy just got the weirdest medicine, for back phlegm, I hear. Ahhhhh, how gross can you get? I don’t even know how that works. The guy is way out of his mind, just like about all of you people, I guess.

One of my long-time favs from the BLR repertoire remains this faux Ron Paul ad. Cracks me up every time.

Ted Cruz’s favorability has collapsed across the board in an array of poll’s since his convention appearance last week.

Ted Cruz’s failure to endorse rival Donald Trump for president at last week’s Republican National Convention in Cleveland, Ohio has apparently caused his favorability rating among GOP voters to collapse, according to a national survey and an Ohio poll.
cruz angry

“Cruz’s move, however, appears to have backfired. While 60% of Republican voters had a positive impression of the former presidential candidate before the convention, just 33% have one now.”

“Ted Cruz, who scored a strong round of boos when he declined to endorse Trump in his speech to the RNC, was not viewed kindly by Republicans voters. Though Cruz finished second in the GOP primary race, just 28 percent of members of his own party now view him favorably; 68 percent now view him unfavorably. Clearly, his performance at the GOP convention was not received well by his party.”

“The biggest loser from the convention is Ted Cruz though. He has an 18/65 favorability rating with Ohio voters, making him by far and away the least popular figure in our poll. Even among Republicans he’s at just 23/61. We asked GOP voters who they would support in a hypothetical primary contest between Trump and Cruz, and Trump wins out 61-19.”

Hey, guys, what’s the words for a guy who hijacks the whole comment section?

The word is Ragspierre.

So that’s another reason not to vote for Trump, for doing that to Ted.

BLR’s version is actually better than the original. BLR’s has some humor. The original was just ted digging himself in under the whale poop.

Senator Cruz’s speech was really quite good. Nobody but a lying T-rump sucking myrridon would pan the whole speech.

You will recognize yourself in the description.

I assume by “whale poop” you mean Donald Trump.

Try as you might, you can’t restore respect once it’s gone. I had lots of reasons to doubt Mr. Cruz’s sincerity. He never once rehabilitated himself by acting as he would if he was a real true christian conservative. His excuses ring falsely, his demeanor is one of arrogance and anger and his true self was exposed for all to see and hear.

The more you try to claim his actions as justifiable, the more I doubt your ability to see objectively. But perhaps that’s not what you are doing anyway.

Wasn’t it you, Jakee, who some months ago accused non-Trump-suckers of being “passive-aggressive” and hurting your feeeeewings?

IF someone attacked your wife, father, and personal integrity with stinking lies, how would you react, Mr. Christian? I’m not religious, so I’d have kicked his flucking teeth out.

I always thought that when the ghetto toughs pulled guns and shot it out over some insult it was a sign of immaturity and adolescent behavior. Now I know they are senate material.

Tell me, counsellor, would your legal advice be to punch out anyone who insults me? Would you offer that defence in court? Are you really a lawyer or just a 13 yr old with internet access?

Flock-Master ;
Apparently your flock of parrots have turned into pigeons & flown the pigeon-cote. Apparently your insanity has even penetrated their thick skulls. You’re doing good for a loser. I again encourage you to double down.

That was funny, but I agree that the Ron Paul “ad” was better. Bananas!

My favorite was the first Democrat debate one.
https://www.youtube.com/watch?v=V_yxGsWHx9o

Check this out;
It’s clean and kid OK:
https://www.youtube.com/watch?v=LO2eh6f5Go0

That was awesome! Thanks for sharing.

America lost its best candidate because he wasn’t pretty enough, wasn’t boorish enough and was too conservative for the GOPe. Instead of a head-to-head debate between Trump and Cruz we were subjected to games of trivial pursuit featuring Trump, JEB, Rubio, Carson and Kasich, none of whom were actually conservative (small government).

Now we’re stuck with a choice between two big-government types, Hillary and Trump and watching those two is as exciting as watching re-runs of Big Brother. There will be no debates worth watching between these candidates.

So OK folks, you’ve got the candidates you’ve wanted, so why do have to justify your choices by beating on Cruz?

He is the OPPOSITE of a conservative, as JYLD knows but lies about.

Nope. Trump is just the opposite of Ted Cruz. Unlike Cruz, Trump is electable.

We know that Obama was electable. If that’s your standard…

So Gerald Ford was the best nominee?

God would be the best nominee but the question was about the best candidate out of those actually running.

When you do not tell people what they want to hear, you get booed.
It’s what people do.

All jokes aside, Senator Cruz broke his pledge and contract with the Republican Party after signing it, receiving benefits of a candidate – a kind of fraud. He was not the only one who signed and reneged on their pledge.

As Cruz ruthless campaign manager, former hog farmer Jeff Roe said, politics is far dirtier than hog farming. That’s about the only truthful thing issued from the Cruz campaign and Cruz himself.

Take it from me or from a Texas former Cruz supporter: http://www.politijim.com

Rumor has it, Sen. Cruz already has two Republicans considering running for his seat in 2018, Rick Perry and Robert Paul, MD, brother of Rand Paul.

I would love to see Rick Perry run against Cruz in 2018.

So this rumor, which you just invented, has three people running against Cruz – Rick Perry, Paul, and the third is, um…

Remember that Unc here is our occasional poster who is our 9/11 Truther, and general tinfoil hat guy.

Like Trump, you ahve no morals. Cruz’s responsibility towards his wife and father predate that pledge. One Trump trashed them, it was null and void. If Trump had murdered five people, would you still attack Cruz for not endorsing him? Of course you would.

Guys, how can you read what these guys say and vote for their candidate? Leave the top line blank and vote downticket.

Obama-ites have succeeded: fundamental transformation. The divide is deep, the indoctrination and inability to identify a wolf in sheep’s clothing………breathtaking.

Most said Reagan was finished after his 1976 failure to gain the nomination, and failure to endorse the RINO-nominee, Ford.

Let’s hope that the divide that has enabled the willful blindness and/or self-delusion that a lifelong Democrat-Hillary-supporter (Trump) could FOOL so many…..let’s hope it is not beyond repair.

You are just repeating uninformed myths. Reagan unequivocally stated that republicans should vote for Ford and Reagan also did a campaign commercial in support of Ford. Reagan was a man not a lying little weasel bitch like Cruz.

Here’s the word on the premier Reagan biographer, and a guy who knew Reagan for decades.

People who can read will know who the lying little weasel bitch is.

Why do liars tend to support T-rump like they do?

Why does T-rump insist on lying?

Reagan unequivocally stated that republicans should vote for Ford and Reagan also did a campaign commercial in support of Ford. Reagan was a man not a lying little weasel bitch like Cruz.

Try stomping your foot and holding your breath til you turn red. It’ll add immeasurably to your credibility, lying little weasel bitch…

Step up, and be explicit.

The Eleventh Commandment was a phrase used by President Ronald Reagan during his 1966 campaign for Governor of California. The Commandment reads: Thou shalt not speak ill of any fellow Republican.

…which would have SOME application at least if T-rump was not a life-long Collectivist.

But it just doesn’t. Because he is.

TDS – it’s not just a disorder, it’s a lifestyle.

So stop speaking ill of Ted Cruz. Oh, but you are not a Republican. And certainly no gentleman.

I got at least four you told in that brief, steaming pile of shit.

Where’s you exposition of the “conservatism” you support, now that adherence to the Constitution and devotion to liberty are “old and busted”?

Get it up…if you can…

Did anyone else see the similarities between Ted’s speech and Baltimore AG Mosley’s presser re Freddie Gray? 2 self absorbed angry losers, wrapped up in their own sanctimony, displaying the traits that caused their losses. Everyone else is to blame, I was true to my principles, I did what was right, the rest of you are too stupid to understand, etc.. Arrogant, narcissistic fools, and their followers too.

He and his believe they are the definers and guardians of the conservative movement and all who disagree with their interpretation are disloyal sellouts, she and hers believe the same thing re black justice and those who disagree are racists.

Not much to choose from between them.

If you saw “similarities” between these two “expressions” (Mosby was not making a speech), you are completely out of your FLUCKING mind.

A point of correction:
I said Mosby gave a ‘presser’. Do you think I meant a speech at a dry cleaners?

The rest of your reply is nothing but the usual meaningless name calling that characterizes your posts on LI.

If you saw “similarities” between these two “expressions” (Mosby was not making a speech), you are completely out of your FLUCKING mind.

Meaningful. You lying sack of shit.

Exactly, Rags. Exactly. How can anyone vote for Trump after reading their garbage?

It’s easy. Cruz lost, he’s not on the ballot, and Hillary is a far worse choice.
See how easy it is when you accept reality?

Yes. We ALLLLLLLL know this.

What nobody understands is the sick drive to keep lying about and smearing Cruz by T-rump and his cult.

Yes. We ALLLLLLLL know this.

What nobody understands is the sick drive to keep lying about and smearing GOP Nominee Mr. Trump by the butt hurt Cruzbots.

STILL waiting for you to get it up, Spunk Face.

Tell us about the new order, now that the Constitution and liberty are passe.