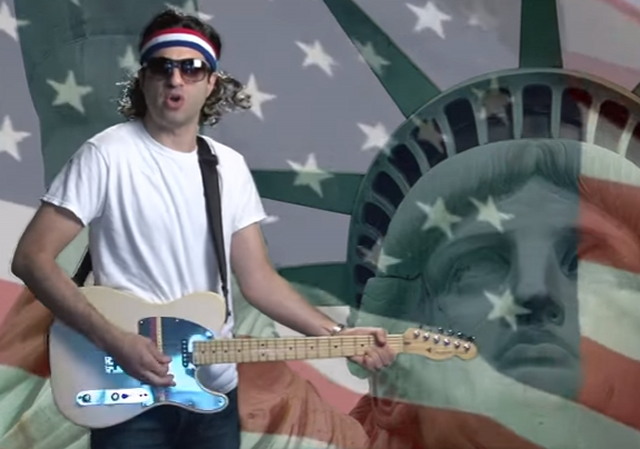 July 4th weekend is a perfect time to reflect on our freedoms and their importance. In that spirit, Remy of Reason, who’s kind of the Libertairian version of Weird Al Yankovic, has produced a parody of Toby Keith’s song “Courtesy of the Red, White and Blue” which enjoyed popularity after the attacks of 9/11.

You can make an argument, and many conservatives have, that things like the Patriot Act haven’t directly impacted the civil liberties of average American citizens, but some things have obviously gotten out of control, as exemplified in Kemberlee’s horrific post about the TSA yesterday.

Remy’s humorous parody focuses on the fact that while we give away our civil liberties in the name of combating terrorism, it doesn’t hurt the terrorists, it just makes us less free.

If you’re in a place where you can’t watch videos, here are the lyrics, courtesy of Reason TV:

He wanted my mother, my sister
our carpet and me
to grow up and live happy
in the land of the free

Yeah it’ll feel like the whole wide world
is raining down on you
brought to you courtesy
of the red, white, and blue

Yeah don’t it feel like the whole wide world
is raining down on you?
that’s brought to you courtesy
of the red, white, and blue

Balancing our freedoms with national security is complicated but at least we can still laugh at ourselves.

If I click on a link to a commercial website at Reddit, the ads at this site change. My preferred search engine is duckduckgo, partly but ineffectively to get away from Google.

We might as well give the government the power to do what advertisers are already doing. The way to safeguard our liberties is to put substantial penalties on the misuse of personal information, because like it or not, the information is out there.