Sanders says she must become the next president. 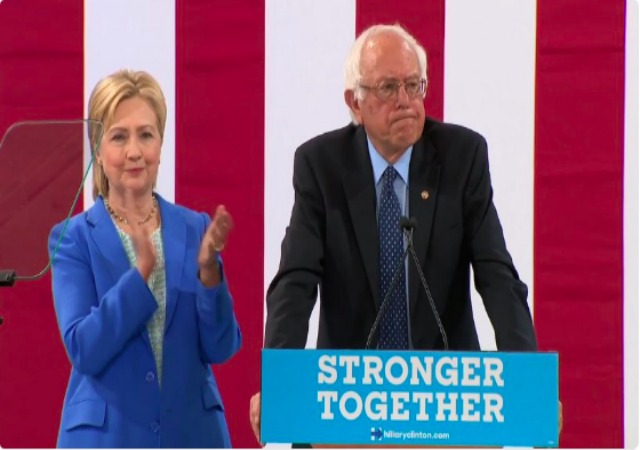 #BernieSanders: "I have come here to make it as clear as possible as to why I am endorsing #HillaryClinton." pic.twitter.com/GijQVNtPPx

Sanders joined Clinton at an event in Portsmouth, New Hampshire, to make his announcement. Weirdly enough, he defeated Clinton in the New Hampshire primary “by wide margins”

We do not know yet if this means Sanders will suspend his campaign, but it is well known that Clinton is the presumptive Democrat presidential nominee. He said:

Secretary Clinton goes into the convention with 389 more pledged delegates than we have and a lot more super delegates.

He then explained the only way they can achieve their Fantasy Island dream where minimum wage becomes a living wage and all the free stuff is by uniting to defeat Donald Trump:

Hillary Clinton understands that we must fix an economy in America that is rigged and that sends almost all new wealth and income to the top one percent. Hillary Clinton understands that if someone in America works 40 hours a week, that person should not be living in poverty. She believes that we should raise the minimum wage to a living wage. And she wants to create millions of new jobs by rebuilding our crumbling infrastructure. – our roads, bridges, water systems and wastewater plants.

“And she wants to create millions of new jobs by rebuilding our crumbling infrastructure. – our roads, bridges, water systems and wastewater plants.”
__________________

LOL. Somebody should clue Bernie in. Obama already spent over a trillion (borrowed) dollars to create millions of new jobs by rebuilding our crumbling infrastructure. And guess what?

Our infrastructure is still crumbling, barely any jobs were created, but lots of Dim cronies made out like bandits (or thieves and frauds, which is what they are).

Ha, listening to Rush on the way back from golf, he said hitlery should call zero and clue him in on how to stimulate the economy if it’s such a great idea she has.

“Hillary Clinton understands that we must fix an economy in America that is rigged and that sends almost all new wealth and income to the top one percent.”
___________________

We have an economy that is rigged by a federal government that is rigged. And it’s rigged by, and for the benefit of, corrupt 1%-ers like Bill and Hillary Clinton, and their Clinton Crime Family Foundation, which is nothing more than a money-laundering firm for the Clintons’ influence peddling. And if you want an example of how the rigging is done, look no further than last week’s decision by the FBI and AG Lynch not to indict Hillary Clinton (or any of her aides) for their criminal conspiracy to help Clinton hide her official State Dept. e-mails, which evidenced Clinton’s corruption.

Another total fraud just like Elizabeth Warren. The following should be required reading before anyone casts a vote. It is a link to the complete list of paid speeches by Hillary and Bill for the 3 year period 2013-2015 during which time they were paid close to $50M.

What is remarkable is the number of times she banged out two speeches in one day pocketing at least $450k an amount that would put her in the top 1% if she earned it in a year.

Bill was more of a one speech per day kind of guy… I’m sure he needed to leave time for “other” activities while jetting around the world.

When will Bernie tell us what his title is at the Clinton Crime Family Foundation? Everyone has his price I have heard it said.

Damn, hit the down button by mistake.

Did Bernie have a horse?

Look at our cities that have been controlled by Democratic policies for decades: Baltimore, Chicago, Detroit, and Washington, DC. These cities also have lots of black politicians in significant public office. And yet, they have severe economic and violence problems. It’s not the skin color. It is the policies.

Cities that have been balanced with occasional Republican administrations have fared better, because they have had a little bit of correction. For all of their blather, the Democrats have policies that go to far and yield pernicious results.

And he said all of that with a straight face. I’m kinda surprised he made it through without his head exploding. Must have been the obligatory #NeverTrump stuff that brought his blood pressure down.

And he isn’t even a real Democrat.

But cheer up; there’s little chance that the Republicans will support their nominee.

So true.
Proof? The 2 comments from the plastic parakeet lady & BE minu-man.

Sellout. I was really hoping for a fight at the convention.

A Bernie Sanders endorsement of Hillary Clinton shows the true hypocrisy of this lazy little man.

Look at that face. Doesn’t he look happy?

He always looks like that… the dude is just unhappy all the time.

He’s got that “Comey-style” integrity.

What did Bernie say about Crooked Hillary?

He said she was not “qualified” for the White House.

Look at where she is getting the money from Wall Street, another powerful special interest, she voted for the war, she cited Henry Kissinger, in a sense, as a model for her,”

“I have my doubts about what kind of president she would make,”

“But in terms of her judgment, something is clearly lacking.”

Bernie is backing crooked Hillary! What are his supporters thing right now? Feel the “Bern”…. not so much now!

And they are in a statistical tie in nation wide polls!

The Clinton campaign knows they are in deep trouble.
Hillary is bold faced liar and everyone know it!

Nothing to see here. Just another socialist demonstrating that he can be bought off.

Capitalist create jobs, not the government! Get it straight America.

Think of all the BernieBot’s souls that were just crushed today.

All of you who contributed $20 to Bernie because he’s fighting the crooked Washington establishment should ask for your money back.
Clearly it was all a lie.