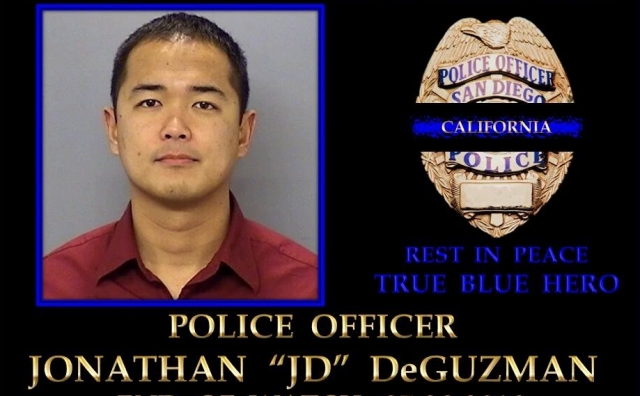 San Diego may have joined Dallas and Baton Rouge as cities who have lost police officers in a deliberate attack.

San Diego police were trying to determine whether a shooting that killed a veteran officer and wounded another was a deliberate attack.

Jonathan DeGuzman, a 16-year veteran of the force, died Thursday night when a gunfight erupted after he and his partner stopped someone on a street in a blue-collar area of town.

Hours later, a trail of blood led to a wounded suspect who remained hospitalized in critical condition, while a second man described only as a potential suspect was captured after an hours-long SWAT standoff Friday.

San Diego Police Chief Shelley Zimmerman held a press conference, during which she described her work with the slain officer.

“I can tell you he is a loving, caring husband, father, talked about his family all the time,” SDPD Police Chief Shelley Zimmerman said of DeGuzman in a news conference Friday morning. “I personally worked with him when I was a lieutenant at Mid-City Division. I know him. This is gut-wrenching. He cared. He came to work every single day just wanting to make a positive difference in his community.

Zimmerman called his killing “senseless” and said the only thing the officers were trying to do was protect the community.

In a subsequent update, Zimmerman revealed without further comment that the police have reviewed footage from the police body cams.

Wade Irwin is the second officer wounded in the shooting. Despite being in serious condition, he is expected to recover following surgery.

Yesterday, local news coverage focused on the efforts of the SWAT team to arrest one of the two suspects in the slaying, who was eventually taken into custody.

Police in San Diego have arrested a second man suspected in the shooting of two officers, one of whom died.

He was detained about 1pm on Friday in the Shelltown neighborhood near a house that police had besieged since early morning, hours after the fatal shooting.

A Swat team found the house to be empty, prompting speculation the man had slipped out during the apparent standoff.

Police arrested the first suspect, who suffered gunshot wounds, shortly after midnight in a ravine near the street where the two officers were shot on Thursday night.

The suspects have been identified as 52-year-old Jesse Gomez and Marcus Antonio Cassani, 41. The capture of Cassani was tense.

…Officers fired a barrage of about 50 gas bombs into the home, which had an armored SWAT vehicle in the driveway. A remotely controlled robot searched the house and no one was seen on through its camera, but it couldn’t not open a closet door.

A few moments later, the officer could be heard on the bullhorn saying, “Hey Marcus. We hear you coughing in there. Come on out.” But hours later, about 12:30 p.m., SWAT officers entered the home and found no one there.

During the SWAT incident, however, officers swooped down on Cassani, found about three blocks away, standing in the middle of the street waiting for them to arrest him at 11:40 a.m. His sister had called police to tell them where to find him.

If you recall, our city officials and local clergy rallied in support of the San Diego Police Department a few weeks ago, in the wake of the Dallas and Baton Rouge incidents. Now, our city is coming together to mourn the loss of one of its own.

CA has tough gun laws. Those laws can’t change the heart of a criminal, can they?

My prayers for the officer’s family. May he rest in peace. And for his wounded partner too.

If it wasn’t for me this wouldn’t have been brought up. My pointing out the lack of articles on non black cop killers by “pro police”people,obviously forced the issue.

This odd declaration is completely false: this post was written on Friday.

Post hoc, ergo propter hoc — a Latin phrase for “after this, therefore, because of this.”