France calls Russia a partner, not a threat. 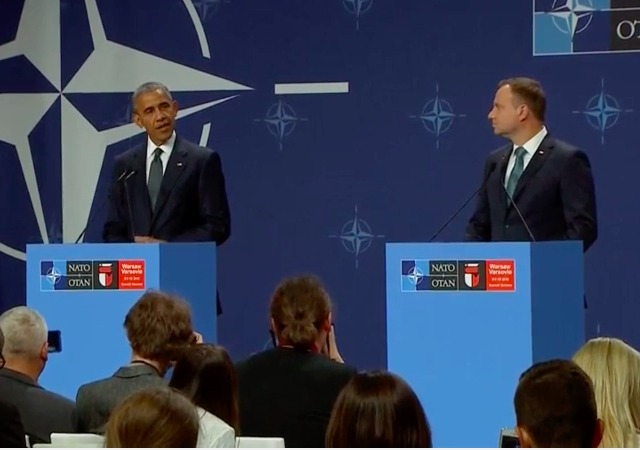 President Barack Obama wants NATO to “stand firm” against Russia until the Kremlin has fully complied with ceasefire agreements in east Ukraine.

He also promised 1,000 troops to Poland for extra security:

“In Warsaw, we must reaffirm our determination — our duty under Article 5 of the North Atlantic Treaty — to defend every NATO ally,” Obama said.

“We need to bolster the defense of our allies in central and eastern Europe, strengthen deterrence and boost our resilience against new threats, including cyber attacks.”

In a Financial Times column, Obama urged NATO allies to defend each other when needed:

In Warsaw, we must reaffirm our determination — our duty under Article 5 of the North Atlantic Treaty — to defend every Nato ally. We need to bolster the defence of our allies in central and eastern Europe, strengthen deterrence and boost our resilience against new threats, including cyber attacks. We need to deepen security co-operation between Nato and the EU and increase our support for Ukraine as it defends its sovereignty and territorial integrity. And even as our nations remain open to a more constructive relationship with Russia, we should agree that sanctions on Russia must remain in place until Moscow fully implements its obligations under the Minsk agreements.

French President Francois Hollande told the organization they should consider Russia a partner, not a threat:

“NATO has no role at all to be saying what Europe’s relations with Russia should be. For France, Russia is not an adversary, not a threat,” Hollande said as he arrived for a landmark alliance summit in Warsaw.

“Russia is a partner which, it is true, may sometimes, and we have seen that in Ukraine, use force which we have condemned when it annexed Crimea,” he added.

Hollande said this in front of countries that Russia has threatened since they invaded east Ukraine and annexed Crimea in 2014. Estonia, Latvia, Lithuania, and Poland have all asked NATO for a permanent presence due to Russia’s threats. He promised “France will do what it has to do but no more.”

However, the US, Britain, Canada, and Germany have taken charge of battalions, not France. Obama promised the 1,000 troops to Poland while Britain took one in Estonia and Germany in Lithuania.

Canadian Prime Minister Justin Trudeau said his country will provide “450 soldiers and armoured vehicles to Latvia,” which grows “the force in Latvia to around 1,000 troops.” He will also send six CF-18s to help patrol the air, which Russia has violated numerous times since 2014.

NATO even invited Sweden and Finland, non-NATO members, to the top table at the summit. Both countries have expressed intentions of joining NATO due to Russia’s aggression against Ukraine and incidents involving Russian submarines in the Baltic Sea near their coasts:

“They cannot be part of decision-making but they are definitely part of decision-shaping. The fact that the leaders will discuss Russia at the summit dinner, and that Sweden and Finland take part, sends a message,” said a NATO official.

Finland and Sweden cannot be part of the alliance’s contingency planning. Some in NATO want to see Helsinki and Stockholm firmly in.

“It is an issue in case of a conflict in the Baltic Sea region. We would need to work with Sweden and Finland, especially to use their airspace,” said a NATO diplomat.

“We can talk now and imagine how that would work. But eventually it would be their political decision, we have no guarantees.”

Sweden remains hesitant, though, because of possible backlash from the Kremlin. Russian President Vladimir Putin and other officials have threatened the two countries if they grew closer to NATO. Putin even said he would move troops to Finland’s border if they joined NATO.

France is right. Obama needs to end his illegal progressive wars, rescind his anti-native policies, address the causes of the global humanitarian disaster he saved and created (e.g. mass yet selective exodus), and stop attempting to ignite a new cold war.

Last month NATO held joint military exercises involving thousands of troops in the Baltic republics & Poland. That’s right on Russia’s border folks. Western ineptitude since the fall of the Soviet Union has unnecessarily given Russia reasons to be suspicious of our intention’s. I’m not saying we shouldn’t be wary of Russia, I am saying we should be cautious in the message we send. Bear in mind, the Soviet Union dismantled on its own volition.

At the present time we are “blessed” with an unusually political, reckless, & incompetent leadership class involving both parties that are known for screwing up most of what they involve themselves in. For the bulk of his tenure Barrack Obama has been feckless & a disaster in foreign policy. We are in a much more dangerous world than we were 8 years ago. Do we really want to make decisions that could well lead to war with this man as Commander in Chief?

In his last months Obama is trying to close his tenure by being everything he has not been for the last 7 years. The media naturally want him to go out on a high note to cover their complicity in his continuous disasters.

I see this as a parting shot. He’ll get credit if it works out, his successor will get the blame if it doesn’t. Throw in the McCain, Graham wing of the republican party & this has the makings of an inadvertent & avoidable war. And what would serve the purposes of the institutional DC ruling classes better right now than a distractive war that takes the countries mind off what complete screw-ups they’ve all been.

If Obama is talking tough over Poland I’d say that Poland is toast.

The “firmest” Obama will ever experience against a US adversary is when he dodges a national security meeting and takes a crap.

When it comes to adversaries that fight back, Obama is a coward. He couldn’t even handle Romney in a debate: that oinker Candy Crowley had to do it for him.

The GOPe and a tiny nation like Israel are more Obama’s speed.

1000 troops is a fucking joke. Which goes quite well with NATO being a joke.