If Tiger Woods Supported a Republican, Maddow Would Probably Dismiss Him as ‘a Golfer Currently Ranked 628 in the World’ 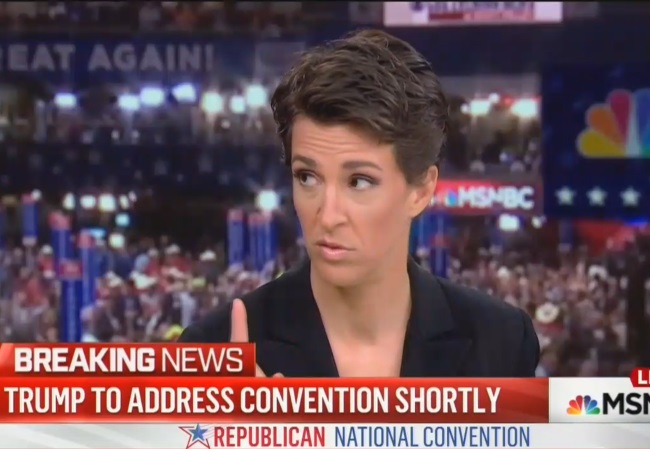 Where does Rachel Maddow’s feminist solidarity end? When a woman has the audacity to support a Republican . . . On MSNBC, commenting on tonight’s RNC, Maddow twice mocked speaker Natalie Gulbis, a professional golfer, for her current modest world ranking of about 500.

In doing so, Maddow ignored the fact that Gulbis is a former #6 on the LPGA money list, has won four professional tournaments and at one point placed in the top 10 in four consecutive major championships. If Tiger Woods spoke for Trump, I suppose Maddow would dismiss him as “the 628th golfer in the world” [his current ranking.]

Even Brian Williams was moved to observe that Maddow was using “using sarcasm.” Eugene Robinson and Steve Schmidt rose to Gulbis’ defense, pointing out, respectively, that Gulbis had previously been ranked higher and that “golf is a cruel game” in which being ranked 500th “makes her a hell of a good golfer.”

RACHEL MADDOW: Natalie Gulbis is the next speaker. She’s the number 492 ranked pro golfer in the world. She was also on Celebrity Apprentice. Continuing a sort of theme tonight where they’re putting on people who are not necessarily well known, we have Adam [sic, Andy] Wist from Standard Waterproofing. We’ve got this Celebrity Apprentice pro golfer, ranked roughly number 500 in the world. We’re also going to have an employee of a Trump winery speaking this evening. I should tell you that there’s also, landmark moment in American political history, we are going to have, I think it’s going to be the only national convention in American political history in which we are going to have not one, but two former cast members from The Bold and the Beautiful speaking on two different nights of the convention.

BRIAN WILLIAMS: I think you are using sarcasm right now.

WILLIAMS: Luckily, our friends Steve and Eugene are here, watching and listening along with us.

EUGENE ROBINSON: I don’t know from The Bold and the Beautiful, but I believe Natalie Gulbis was once ranked higher than that as a golfer. And she’s fairly well known in golfing circles, because she’s been kind of on the cover of golfing magazines because she — frankly because she’s good looking.

STEVE SCHMIDT: Golf’s a cruel sport and 500th in the world makes her a hell of a good golfer. I’ll tell you that .

Well, 492 is a higher ranking than Maddow’s as a journalist.

I don’t think Marrow can be characterized properly as a journalist. Agitator, maybe.

Sorta like Rush Limbaugh and Bill O’Reilly – Yes, they have larger audiences, but they cannot be characterized properly as a journalists

The difference there being the factual accuracy of Limbaugh and O’Reilly in their reporting.

Maddow is merely a propagandist and an ignoramus – much like the ignoramuses who views her otherwise.

The LPGA didn’t want a swimsuit calendar at golf events? I bet they would be fine with a calendar of golfers in overalls and tool belts.

Madcow is a living example of the difference between knowledge and wisdom.

Sarah Palin was reduced to a Tina Fey caricature. Carly Fiorina is an out of touch, heartless ball-buster. Condi Rice is an uncle tom, right wing nut-job. Michelle Bachman has migraines so she’s obviously psychotic. It’s all part of the War on Republican Women being waged by people who claim to support “women’s rights”.

Every politician get caricatured, but Sarah Palin has proved to be her caricature.

Carly Fiorina was a enormous bust at HP, yet she ran as a great businesswoman. She was good at ATT. But when she got a CEO position, she proved the Peter Principle. Based on HP, her credibility is ZERO.

Condi Rice missed 9/11. Duh! It is not just the PDB she ignored. Richard Clarke said that the Bush Administration ignored terrorism until after 9/11 and then they tried to put it on Iraq. How did that working out? ISIS is directly traceable to the invasion of IRAQ and the botched aftermath – like disbanding the Iraqi Army

Bachman: What to say? Goodbye

We have been over these false points you raise, before.

You are a liar. You may genuinely believe what liars have told you, but you are a liar, because your facts do not exist.

If Carly Fiorino worked at AT&T it was well before she became a top level executive. She became a sales manager at Lucent after it broke off from AT&T. She certainly did not do a good job there. Her sales deals virtually created the telecom bust circa 2000.

Sadly non of the women in top level positions are working out all that well. I had hopes for Ginny at IBM but last I heard she was in trouble ( don’t follow IBM all that much ), I guess because they are all too busy writing books on breaking through the glass ceiling to actually do their jobs.

Or maybe there are women in high tech who are doing well, but we never hear them because they are too busy doing their jobs to tell write books about how they busted through the glass ceiling.

Every politician does not get caricatured in the mainstream media.

Could Maddow have an aversion to white balls, or all balls?

Why is Rachel Maddow being used as a news anchor? There is not even a semblance of a fair reporter. She has never meet a republican women that she hates with a furious progressive passion.

Everyone here knows what a threat MSNBC is to our nation!
A self appointed master who knows better than you do!

MSNBC? Not quite the big league!

Yes, and it looks like the head of the Big League is a serial sexual harasser. Even Megyn Kelly has now come forward.

Perhaps those who think we don’t need laws or regulations should contemplate that all these powerful Fox women where gagged for years. They might still be if one hadn’t had the courage to fight against the NDA written into her contract.

Megan Kelly responded to an internal investigation, and “somebody” selectively leaked her remarks.

If nothing else, Ailes created enormous opportunities for women.

Reminds me of a day, many years ago. I was in college, a bunch of us were sitting around the TV in a dorm watching an NFL game. One guy was making nasty comments about some player’s ability. Another guy said: “Did anybody ever ask _you_ to play in the NFL?”

So what’s the consensus—is Rachel a genuine non-blond?

Female chauvinists are notoriously gynephobic and transhuman (e.g. final solution – abortion industry, channeling Mengele – Planned Parenthood). They are part of a political movement that followed on the heels of women’s rights to excise Posterity from the constitution, reduce women to taxable commodities (i.e. “revenue”), promote dysfunctional relationships, and exploit women for Democrat leverage.

I see her problem as being “outside trying to look in”. She is NOT feminine, at all. I see her as lonely, depressed, struggling…unable to come to terms with her own homosexuality. “Educated but Ignorant” is becoming a common phrase.

Question: were Schwarzenegger or Eastwood mocked for being insufficiently popular?
Tiger Woods is a sports icon; it doesn’t matter where he stands now. GOP, with their obsession to reach out to the low info crowd, fell for a conman’s promice to showcase celebrities at the convention. Pathetic.
Trump is like a guy who meets you and tells you that his band is so popular and he is so famous and on the way up, But when he takes you out it turns out that the only one who knows him by name is Scott Baio.usually in a situation like that there is no second date.
There is no need to Include a lot of celebrities. Celebrity obsession radiates insecurity; count on the general public to senses. One is plenty, especially if he delivers a memorable speech, like Clinton did for Romney. Romney didn’t win, but four years later we still talk about the empty chair.

Answer: YOU are mocked for being insufficiently intelligent.

You can never be sufficiently admired for your wit.

Romney didn’t lose because of the empty chair: Mittens lost because he ran his campaign like the ball-less rino he is.