Israeli flag burners at Dem Convention are our common enemy

Israeli flag burners at Dem Convention are our common enemy 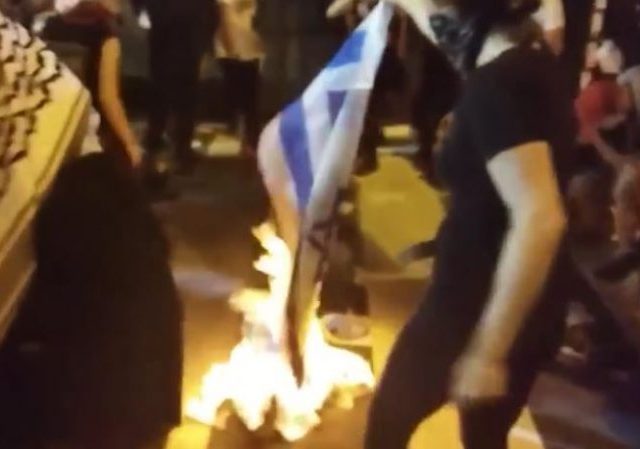 The burning of an Israeli flag outside the Democratic National Convention has received a fair amount of press.

There’s a bigger point here, one I have made many, many times before.

Israel’s fight is our fight, and vice versa. And by “our” fight I don’t mean just conservatives or Republicans.

The video of the Israeli flag burning provides proof. As the Israeli flag is being burned, one of the leaders of the group is shouting “Death to the USA power” and someone else asked “where’s the American flag”:

Apparently they found an American flag, because at the same time they torched the Israeli flag, they burned a U.S. flag:

Clarifying: I'm told two US flags and two Israeli flags burned a minute ago. Activist complains they were nylon, not cotton #DemsInPhilly

In the video above and below, you can hear the crowd also chant “Intifada, Intifada” and “Long Live the Intifada.”

Those chants are frequently heard at anti-Israel disruptions of speakers and Boycott, Divestment and Sanctions (BDS) rallies on campuses, like this disruption of an Israeli Studies event by pro-BDS students at UT-Austin, led by law student Mohammed Nabulsi:

I’ve written hundreds of times about the BDS movement not just because it is anti-Israel, but because it is a reflection of that same Leftist-Islamist coalition which has rendered streets in many European cities unsafe for Walking While Jewish.

The Israeli flag burning also reflected a larger, astroturfed effort by anti-Israel groups to hijack the convention and turn it into a “Palestinian rights” event. Ill have more on that in a later post.

Face it, Israel. The DNC is just not into you.

And, it appears that the majority of American Jews don’t care. They will vote Democrat anyway.

It is estimated that there are about 10% of American Jews who are Orthodox and most of them politically conservative. Most of the rest are progressive, leftist, in leanings. If my memory serves me correctly, any number of Israelis were dismayed that the majority of American Jews supported Obama.

To be fair, this is not inside the DNC, but the protesters outside. This is the people the GOP current, and possibly last, nominee is actively courting.

I challenge you to produce a single incident where either an Israeli or American flag was burned as part of a Trump rally.

Then why did you bring it up.

I didn’t. I brought up the fact that HereComesThe Sun is courting disaffected Democrats, Bernies and miscellaneous leftie scam.

You equate a very large number of people under a small umbrella. You always do that.

This heinous act along with no American flags and no murdered police officer’s families tells us a lot about how the Demorats think. No mention of terror and no mention of the VA and its horror stories or veterans in general. All they want is to get the black vote and the union vote. America can go to hell as far as the Demorat party is concerned.

NPR must have gone out of their way to find American flags at the DNC. They had a picture of an Alabama delegation with lots of flags. It is interesting that the TV cameras did not find them.

Agreed. And, it’s also why I think this struggle will continue for some years. It can’t be resolved by a single Presidential election, nor any walls, nor legislation. Generally, with two major sides who can’t even have civil conversation, how is one to think that the strife can be all that easily overcome.

It appears it’ll be a tough road ahead with tough decisions and hard work not for the faint-hearted.

As wages stagnate, the idea of citizenship is discarded and classes increasingly diverge into winners and losers, the federal government’s ability to buy off the later will decrease. The result will be a crisis of legitimacy for the federal government. If Clinton wins, look for falling taxpayer compliance, taxpayer strikes, further “easing” of police activity (if not outright strikes), non compliance with efforts to destroy the Second Amendment and so forth.

Any regime that scorns its own security services and the class that fills their roster isn’t destined for a happy ending.

I think that’s a very good description of things regardless of the winner.

If you think Monofart is a good, law-abiding, liberty-loving cat…

You know what really delegitimizes federal government? Large swarths of population beliving that the president was not elected fairly, like maybe with a little help of an enemy super pack?

Edge: There is no one thing that delegitimizes a president; nor can a president be delegitimized without delegitimiation of a system. And you’re quite right to point out that the process is entirely bipartisan—necrosis doesn’t distinguish between red and blue cells.

For observers (partisans have a harder time understanding the totality of a delegitimating system) the only question is how, in a unique society like ours, the system will unwind. It’s a familiar study for students of Southern secession—the delegitimation of both the federal government and Northern society by the white South.

We are in very sad but fascinating times.

If these nuts want to take down Israel and the USA, who better to vote for than Clinton.