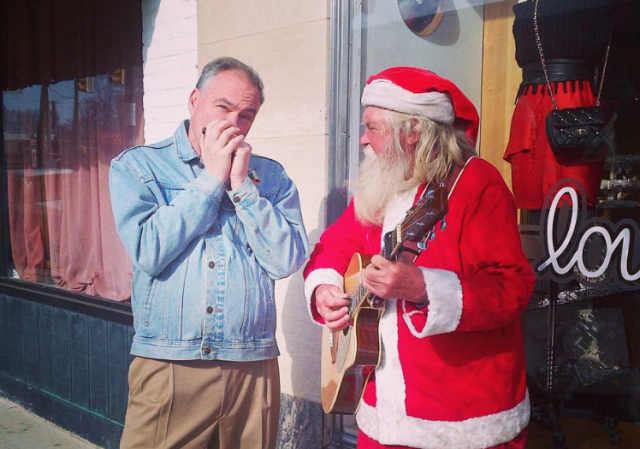 I'm thrilled to announce my running mate, @TimKaine, a man who's devoted his life to fighting for others. -H pic.twitter.com/lTVyfztE5Z

Politico reports that Kaine has a gift scandal of his own, making him a kindred spirit for the Clinton Foundation scandal-tainted Clinton, Kaine accepted clothes, vacation as gifts:

Virginia Sen. Tim Kaine took advantage of the state’s lax gift laws to receive an $18,000 Caribbean vacation, $5,500 in clothes and a trip to watch George Mason University play in the NCAA basketball Final Four during his years as lieutenant governor and governor, according to disclosures he filed.

Now a leading contender to be Hillary Clinton’s running mate, Kaine reported more than $160,000 in gifts from 2001 to 2009, mostly for travel to and from political events and conferences, according to disclosures compiled by the Virginia Public Access Project. The givers included political supporters, a drug company that soon after bought a facility in Virginia, and Dominion, the state’s biggest provider of electricity.

While legal under Virginia’s unusually permissive ethics rules, the gifts could become attack-ad fodder after similar presents led to corruption charges for Gov. Bob McDonnell, whose conviction the Supreme Court overturned Monday. Republicans could also use the records to portray Kaine as part of the self-dealing establishment in a cycle animated by hostility toward the political class.

Jim Geraghty at National Review reported on Kaine’s receipt of gifts in 2013:

There was McDonnell’s immediate predecessor, Tim Kaine, now one of the state’s two senators:

Gov. Timothy M. Kaine, a Democrat, accepted an $18,000 Caribbean vacation last year, putting him atop the list of Virginia elected officials who in 2005 accepted nearly $315,000 in gifts, trips, concert tickets and other gratuities from corporations, interest groups and wealthy persons. The newly elected governor’s winter getaway on Mustique — a private island playground for rock stars and royalty — was paid for by Albemarle County investor James B. Murray Jr.

Murray had contributed $41,000 to Kaine’s campaigns up to that point, according to the Virginia Public Access Project. Kaine reappointed Murray to the Virginia Commission on Higher Education Appointments.

While he was governor, Kaine received $186,899 in gifts and travel – Redskins tickets, cases of wine, trips, etc. https://t.co/rtjwTEvWSa

Yeah but next to the Clintons making $57.5M while she was SecState, it's like he took home pens & a stapler. https://t.co/BAwHTaSz21

Trump can take the wind out of democrat sails by saying, “Yeah, Tim was on my VP list, too!”

Why am I not too surprised at this little tidbit. Corruption abounds in the Democrat party.

Oh, don’t worry he’ll be going on and on about Ted Cruz’s dad.

That was really weird!

Hillary admits it! She needs a MAN!

That’s so she can get the vote of those bitter clingers.

Are there ANY pols who do NOT take ‘presents’ even if it’s not their birthday ?

BTW I am voting Trump despite the fact that I despise this character because of Justice Ginsburg. Trump for 4 then out if he isn’t as advertised – i want a neutral if not conservative SCOTUS and a friend not a frenemy to Israel residing at 1600.

The Clinton Crime Family (CCF) must not be allowed in the White House (even as visitors, who knows what they will ‘borrow’).

You stole that from Drudge.

At least she didn’t pick a Kaine-ye West to walk with.

Doubling down on corruption? Why not!

But of course there’s no possibility of Kaine going to prison over this, unlike McConnell.

Oh…McConnell is a Republican. Never mind.

I blew that one.

Yes, you did, because McConnell may as well be a Democrat. He’s Obama’s Mitch.

Hillary is scared. Otherwise she would have picked someone on the left like Warren. She’s trying to attract moderates.

Actually, I believe she is scared to death about losing Virginia.

Trump can easily go to VA and cite her setting up her crony as Governor by a phony conviction of the prior governor, rigging the last election with a wildcard that meant her Democrat lackey would win, and then declare VA a rigged system if it doesn’t vote for him.

Choosing Kaine as a running mate tells you more about how much she fears the Don than which base she is trying to reach.

As Rush might say, Trump has a penthouse suite in her brain and is living large and rent free.

In the end she is going to pay him to house sit.

It was a double bad day for Gov McAwful. First the State Supreme Court ruled his blanket restoration of convicted felons’ voting rights unconstitutional, then Hillary rejects him too.

You are right about shoring up support in VA. Things have not been going well for dems here – witness the reversal they had to do on concealed carry reciprocity that led to an expansion of gun rights.

Piker. Hillary and Hubby collected over a quarter-billion dollars in their little bribe and influence slush fund.

Or maybe he’s in training. There are always two…

That’s … quite weak and very boring.

At least we know that Hillary won’t be taking on ISIS in any meaningful way (or ISIL, or whatever the politically correct acronym-du-jour happens to be). His statement to the CFR that “This can’t be the U.S. against ISIL. It can’t be the West against Islam. The ground forces need to be forces from the region.” has a very nice dichotomy against Trump’s speech that we will quickly destroy ISIS.

This actually reaches ALLLLLL the way back to the Iraq war argument: A fast, light force that can rout the enemy and then leave the nation-building to the locals, or a heavy tread force that will crush the apparatus of everything and rebuild it from scratch. Rumsfeld won that argument and put a light force in Iraq, and look what that got us: nearly a decade and a half of low-level civil war. If we’re going to be resented, we had better damn-well earn it by IMPOSING democracy and peace into the region.

Kaine’s Q&A with the Council on Foreign Relations from December 14, 2015.

Kaine might actually even do further damage to Hillary, as he was one of the co-authors on the Iran Nuclear Agreement. That depends on how much Trump is willing to go after the agreement now that we know that Iran can accelerate it’s program after 10 years, not the 15 we were originally led to believe (and we KNOW that they’re going to cheat). Kaine himself stated: “Look, it’s really questionable as to whether this deal is going to work, but it is imperative that we try it.”

However, perhaps he CAN help Hillary: Sen. Kaine’s former position was Professor, Legal Ethics, University of Richmond School of Law. It’s nice for Hillary to finally recognize that she has such a bad ethical problem that she needs a PROFESSOR as her right hand man to advise her on what is right and what is wrong.

We all know that Democrats have some pretty nefarious political connections … but for Heaven’s sake, why did Hillary have to pick someone with such deep Islamist connections as Tim Kaine?

The Virginia senator has a long history of embracing radical Islam.

He appointed a Hamas supporter to a state immigration commission, once spoke at a dinner honoring a Muslim Brotherhood terrorist suspect and has received many donations from well-known Islamist groups.

Back in 2007, Breitbart reports, then-Governor Kaine chose Muslim American Society (MAS) President Esam Omeish to the state’s Immigration Commission. It was an appointment so controversial that even a Muslim group against radical Islam criticized the appointment and lack of vetting.

In 2008, federal court filings found that MAS was “founded as the overt arm of the Muslim Brotherhood in America…;.

…In the second example of Kaine’s deep connections with Radical Islam, he spoke at a 2011 dinner honoring Jamal Barzinji, the “Founding father of the U.S. Muslim Brotherhood.”

Barzinji has been on the FBI’s radar since 1987, when an informant told them that Barzinji was part of a network of brotherhood fronts to “institute the Islamic Revolution in the United States.”