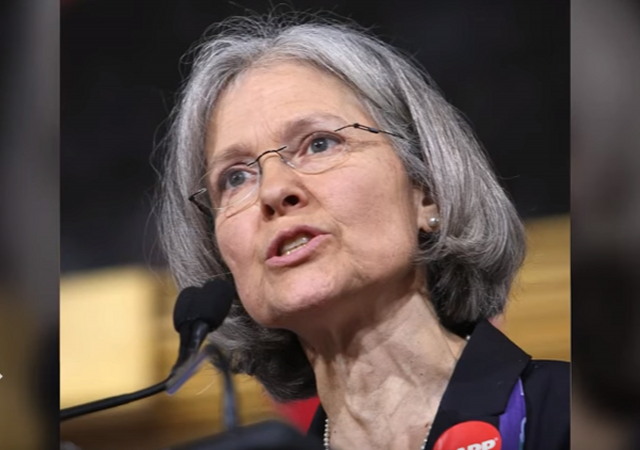 The Green Party’s Jill Stein has a great idea for Bernie Sanders. She wants him to take her place as the presidential candidate for the party.

Sanders isn’t likely to take her up on the offer, but it sure is fun to think about.

Bernie Sanders has been invited to continue his underdog bid for the White House by the Green party’s probable presidential candidate, who has offered to step aside to let him run.

Jill Stein, who is expected to be endorsed at the party’s August convention in Houston, told Guardian US that “overwhelming” numbers of Sanders supporters are flocking to the Greens rather than Hillary Clinton.

Stein insisted that her presidential bid has a viable “near term goal” of reaching 15% in national polling, which would enable her to stand alongside presumptive nominees Clinton and Donald Trump in televised election debates.

But in a potentially destabilising move for the Democratic party, and an exciting one for Sanders’ supporters, the Green party candidate said she was willing to stand aside for Sanders.

“I’ve invited Bernie to sit down explore collaboration – everything is on the table,” she said. “If he saw that you can’t have a revolutionary campaign in a counter-revolutionary party, he’d be welcomed to the Green party. He could lead the ticket and build a political movement,” she said.

Stein said she had made her offer directly to Sanders in an email at the end of the primary season, although she had not received a response.

Naturally, there are some people who think this is a bad idea. Newsy reports:

Jill Stein Has A (Terrible) Plan For Bernie Sanders’ Campaign

If you’re pissed Bernie Sanders won’t be elected president this year, Jill Stein may have a solution for you. Stein is the Green Party presidential candidate, but she says she would step aside and let Sanders and his political revolution move on in…

It’s a nice gesture, but this couldn’t be a more terrible idea for Sanders right now. Sorry, Stein.

Putting on a green jersey for this election is a guaranteed loss for Sanders. The Green Party is currently only on the ballot in about 20 states; that’s barely enough to come in second. It will be much easier for Sanders to oversee his political revolution from the comfort of his Senate seat.

After losing to Clinton this year, Sanders has been able to move both Clinton and the Democratic Party overall farther to the left. A recent draft of the Democratic National Committee’s platform was chock-full of Sanders’ ideas. And just this week, Clinton adapted his free college plan, expanding her original proposal to free college for more than 80 percent of Americans.

And Sanders has made it clear he’s shifted his focus on making his newly adopted party stronger and keeping Donald Trump out of the White House. That’s impossible to do while heading up a third party.

Once again, the left ruins all our fun.

What a splendid idea! I’ll even kick in a couple of bucks for his campaign should he take her offer!

I would love to see him run Green, then Cruz can run Tea Party. Four major candidates on the ballot and we could finally vote for some sanity!