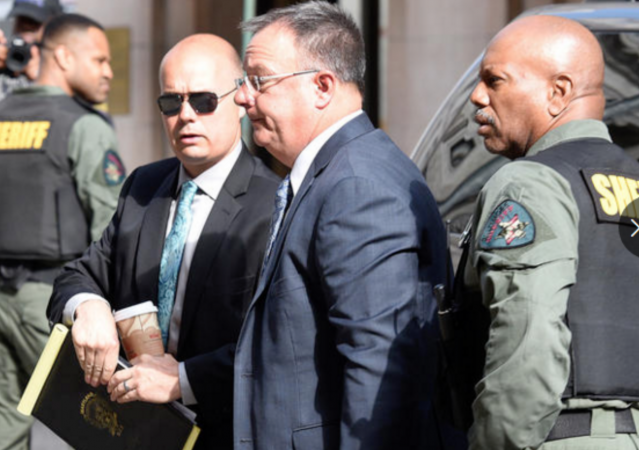 The “Freddie Gray trial” of Lieutenant Brian Rice began today with opening statements and the state’s first two witnesses, reports the Baltimore Sun (the tweets embedded below are also provided by Baltimore Sun reporters).  Rice has chosen a bench trial before trial Judge Barry Williams.  The last two “Freddie Gray” defendants, who also chose bench trials, were both acquitted of all charges.

Although the state dropped one of the minor charges against Rice–the misconduct charge associated with the arrest in which he was not involved–they continue to pursue charges of involuntary manslaughter, second-degree assault, reckless endangerment and a second misconduct in office charge.

During his opening statement, Chief Deputy State’s Attorney Michael Schatzow presented no new factual allegations since the previous trials, and did not cite Rice’s statement to police investigators. He stressed Rice’s position as the highest-ranking officer on duty in the Western District on the day of Gray’s arrest, with authority over the other officers there.

“He was in charge,” Schatzow said.

So it seems the state has spun the “Theories of the Case” wheel and it stopped with the pointer positioned at “Manslaughter by Failure to Seatbelt,” with a side-order of “because Lieutenant.”

Lt. Rice had been assigned to a team of officers sent to crack down on drug dealing around the Gilmore Homes at the request of City Councilman Nick Mosby, husband to State’s Attorney Marilyn Mosby, who ordered the prosecution of these “Freddie Gray” cases.  When he observed Gray flee at the sight of police, he called for other officers to stop Gray.  Officer Garrett Miller, also scheduled to be tried, made the stop, found an illegal knife on Gray’s person, and arrested Gray on that charge.

Rice’s only active involvement in Gray’s arrest and transport, claims the defense, is a nine-second window of time during which he became convinced that attempting to seatbelt Gray was ill advised and dangerous under the circumstances. In support of this judgment the defense notes the growing and angry crowds on scene, Gray’s combativeness, and the van’s very confined interior.

Rice’s defense also noted that Gray never exhibited external signs of injury at any of the stops where Rice was present, facts that would be relevant if the State decided to change their theory of the case mid-trial (as they did with the prior trial of Caesar Goodson) and begin to argue “Manslaughter by failure to provide medical care.”

Based on Schatzow’s opening remarks, the prosecution will focus on Rice’s rank to establish that he knew the guidelines and the risks associated with breaking them. Schatzow noted that acquiring the ranks of both sergeant and lieutenant require “studying for” and passing exams on general orders, and said Rice is “not an inexperienced officer.”

Given that history, one looks to Schatzow’s opening statement as an indicator of the state’s likely arguments to come at one’s own jeopardy.

Following opening statements the state called its first witness, Medical Examiner Dr. Carol Allan.  Dr. Allan has previously testified in earlier trials that she always believed Gray’s death to have been a homicide, not an accident.  This claim was seriously impeached by testimony by the lead investigator on the case who noted that Allan had originally believed Gray’s death was the result of an accident.

Today Allan testified that Gray would not have suffered his ultimately fatal neck injuries had he been seat belted in, but also that the failure to seat belt alone did not constitute homicide in her opinion.

Rather, a finding of homicide also required the failure to provide prompt medical care.

Given this testimony by the state’s own medical examiner it is difficult to understand how the state believes it can convict on manslaughter beyond a reasonable doubt given that there’s little evidence that Rice was aware of a substantive need to provide Gray with immediate medical care.

Interestingly, the Baltimore Sun reports that:

[Allan] said she believed Gray got out of the prone position on the floor where he was left by Rice and other officers before he was injured.

If so, this is entirely consistent with a theory of the case in which the manacled Gray was solely responsible for his injuries, in that he left the position of safety in which the police placed him, and thus was positioned to fall forward on his head in a “shallow dive” type of accident when the van made a routine change in speed or direction.

Next up as state’s witness was Captain Martin Bartness, the author of the Baltimore Police Departments new “mandatory” seat belt policy implemented on April 9, 2015, just three days before Gray’s arrest on April 12, 2015.  In contrast, the prior “optional” seat belt policy had been in effect for 18 years.

A key argument of the defense has been the lack of evidence that any of the involved officers were actually informed of the new mandatory seatbelt rule, and also that even if so informed that there was an expectation that there was practical flexibility based on the circumstances in the application of the new rule.

On the issue of “practical flexibility” in application of the “mandatory” rule, the defense found an interesting angle of attack:

The defendant Brian Rice, however, is a mere Lieutenant, not a Captain or a Major.

On the issue of whether Rice was substantively informed of the new regulation, the defense also found an interesting avenue of attack:

OK, folks, that’s all I have for now. More “Freddie Gray trial” shenanigans to follow tomorrow, I expect.

Thanks as always Andrew. Greatly appreciate how you explain the legalese so that we mere mortals can understand!

The prosecutions evidenced against Rice amounts to nothing. They cannot prove he knew about the policy. Nor is mere failure to follow a department guideline a criminal offense.

Considering the new DOJ Standard, since Rice didn’t intend to harm Gray, he should be acquitted!

This is pretty much what I expected from the prosecution. With every path they have gone down being a dead end, they are focusing on involuntary manslaughter (at least for today as Andrew points out) as this is the only theory that got any traction in the Goodson’s trial (and it wasn’t much traction). While the proving Rice knew or should have known about the seatbelt policy would help the prosecution, the prosecution will likely ultimately argue that a “reasonable police lieutenant” would have ordered Gray be buckled and not buckling created a substantial and unjustifiable risk.
Of course, I expect this to fall flat. 1) The defense will remind the judge that the prosecution always argued Goodson was “most responsible” for the seatbelt and he was found not guilty and 2) Rice has a very strong defense for not buckling Gray; Gray was combative, the crowd growing hostile and the van was cramped. This case is done.

If “No” and “No” then the BPD command staff did not have any expectation that the change in policy would be acted on within any defined time frame. A reasonable conclusion would then be that the new policy was not “mandatory” per the BPD command since they did not act like it was mandatory.

If BPD does, I can’t see how any LT would be able to ever hit the streets. Emails over 4 days were “thicker than a phonebook”???????

This is why in the medical field we have people who’s job it is to go through all of this crap and get the needed information to the needed people. If the policy changed and these officers didn’t know, then it is a failure of the system, not the officers.

So let me get this straight, the new policy allows no discretion by the officer whether or not to seat belt someone into one of those vans? So officers are now required to seat belt a perp in regardless of the danger to themselves? Yea, there is a good policy.

Written by lawyers (no offense to the lawyers here) to shift liability for injuries as a result of not being buckled away from the city and onto individual cops, without regard for the practical implications of said policy.

No, it merely removes the explicit allowance for discretion that used to be written into the rule. There is still the general expectation that all general orders are subject to “practical flexibility based on the circumstances”.

Perhaps the brass felt that the explicit discretion was being abused; that policemen were routinely failing to seatbelt prisoners regardless of the circumstances, to the point where the exception had become the rule. So they removed the explicit exception, while retaining the general caveat that all rules come second to the reality of any given situation.

Com’n, Marilyn. Boston College Law School is hoping to improve its US News school rankings. What better way than to have one of its AA graduates go 0 for 4.

How could Freddie have known standing up in a moving van was dangerous? He wasn’t a lieutenant, or even a sergeant.

But he was a frequent flier.

I would love to be able to observe the body language and demeanor of the prosecutors. If they are capable of shame they must have a very hang-dog appearance. How embarrassing to go through this theater once again at the behest of their execrable state’s attorney!!

Nope I bet they are very straight an professional. Part of being a good lawyer is also being a pretty good actor. Now they may go home and drink heavily afterwards, but they are going to at least act confident in their case.

The judge dismissed the assault charge.

At this point, it’s just a farce.

The prosecution is going through the motions because there is no other mechanism to get out while somehow saving face.

Meanwhile, the damage to police moral continues to build.