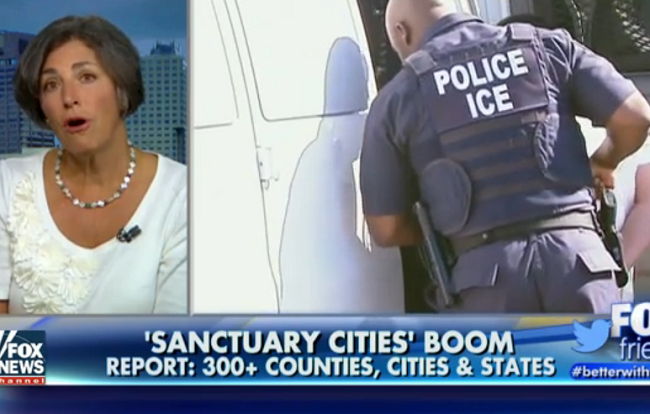 Sanctuary cities have long been a problem, but the heightened public awareness in the wake of  high profile murders like that of Kate Steinle has prompted Congress to take action (finally).  To that end, Congress has conditioned DOJ grants on compliance with federal immigration law.  For California, this move puts at risk as much as $135 million in federal grants.

California state and local law enforcement agencies may have to choose between more than $100 million in federal aid and the “sanctuary city” immigration policies that supporters say are humane, but critics say fuel crime.

The policies, whether in writing or just in practice, preclude local law enforcement from working with federal authorities when they catch an illegal immigrant who by law faces deportation. The laws have sparked a national controversy in the wake of dozens of murders and other violent crimes committed by illegal immigrants who local law enforcement did not report to the Department of Homeland Security.

Republicans in Congress, saying such non-cooperation is illegal, forced the Department of Justice to condition grants on compliance. For California, which enacted the California Trust Act, that could mean as much as $135 million in grants will be withheld.

Stating that the California Trust Act has been “declared illegal,” Jessica Vaughan, director of policy studies for the Washington DC-based Center for Immigration Studies, urges sheriffs and police departments to notify state government that losing this money puts them in “a very difficult position.”

“This irresponsible legislation has already caused the release of thousands of criminals that U.S. Department of Homeland Security Immigration and Customs Enforcement was trying to deport,” said Jessica Vaughan, director of policy studies for the Washington DC-based Center for Immigration Studies. “Now it may also cost California police and sheriffs critical funding from the federal government. Last year, these grants were worth more than $130 million.”

Vaughan said that she suspects, at least in California where this has been a contentious issue, many sheriffs and police departments are going to have to notify the state government that the Trust Act puts them in an extremely difficult position.

‘If I were a sheriff, I’d be thinking about starting to comply with federal law and cooperating with ICE, and the heck with the Trust Act – it’s been declared illegal,” Vaughan said.

Fox News notes that neither Obama nor Loretta Lynch’s Justice Department have objected to sanctuary city policies of cities across the country and adds that “the number of sanctuary cities has increased dramatically over the last decade, with local law enforcement cooperation with the federal authorities decreasing.”

Claude Arnold, a retired U.S. Immigration and Customs Enforcement special agent in charge of Homeland Security Investigations, said sanctuary advocates claim immigration enforcement is the exclusive responsibility of the federal government, however enacting laws like the California Trust Act, which dictates how the federal government can enforce the law, contradicts those claims and can be devastating consequences.

The murder of 32-year-old Kathlene Steinle’s in June 2015 by Juan Francisco Lopez-Sanchez, an illegal immigrant from Mexico, is a prime example, Arnold said. Steinle was shot dead while strolling on San Francisco’s Embarcadero with her father. The alleged shooter, a felon and five-time deportee, has pleaded not guilty to murder charges, claiming the shooting was an accident. Those responsible for releasing him not long before the shooting despite a federal request to detain him for deportation should also have consequences, Arnold said.

“When sanctuary jurisdictions like San Francisco County release criminals that officials know are in the U.S. illegally, and those criminals commit heinous crimes, those responsible should be federally prosecuted,” Arnold told FoxNews.com and also wrote in a WSJ oped. “At the very least, sanctuary jurisdictions that defy federal law should not receive federal funding.”

Tucker Carlson on Fox & Friends Weekend reports that a total of $342 million in tax payer dollars is currently being sent in DOJ grants to 10 sanctuary cities around the country.

In the above interview, Vaughn said it’s “outrageous” that the Justice Department is giving millions of dollars to “these jurisdictions that are clearly in violation of federal law.”

“This is outrageous not only because it means taxpayers are subsidizing the obstruction of enforcement, and they’re not complying with federal law, but the result is that criminal aliens who should be deported instead get released back into the communities and are there to keep threatening people,” Vaughan said. “So it’s a public safety problem as well.”

She said that this can’t go on, calling for action to be taken against sanctuary cities.

“These ten were the worst that DOJ identified, but there were more than 300 of them at last count, all over the country,” Vaughan said. “But these big ones are really sucking up the all this money that should go to places that are doing the right thing.”

“It’s just outrageous that so much money is going to subsidize this illegal activity.”

Congress is also taking action against these ten scofflaw jurisdictions.

Rep. John Abney Culberson, R-Texas, said cities and states that embrace sanctuary policies can be stripped of federal grants, including the entire states of Connecticut and California, as well as Las Vegas, Milwaukee, Miami, Chicago, New Orleans, New York and Philadelphia, which were audited in the Inspector General report.

“If these ten jurisdictions do not repeal their sanctuary policies to comply with this federal immigration law, they will not be eligible for Byrne-JAG and State Criminal Alien Assistance Program (SCAAP) law enforcement grants and could be subject to civil and criminal penalties,” Culberson said in a statement. “Under the new Department of Justice grant guidelines, these ten jurisdictions will now have to choose between receiving law enforcement grant money or protecting criminal illegal aliens. They can no longer do both. If these jurisdictions refuse to comply they could also be forced to repay every dollar they have received from these grant programs.”

It’s a start; however, there are over 300 counties, cities, and states that are deemed “sanctuary jurisdictions”: 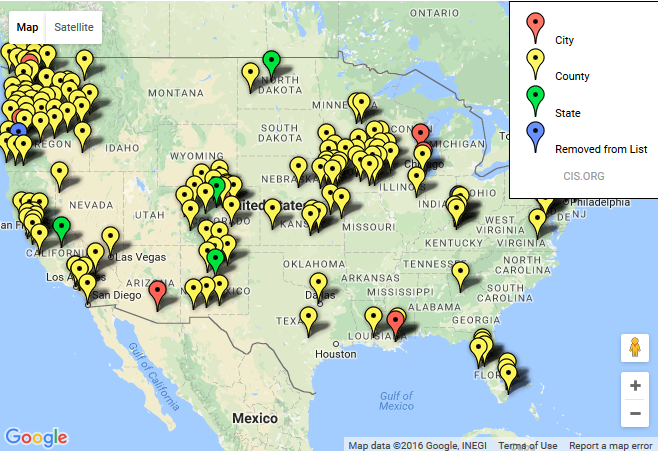 Click here for the interactive map and the list of sanctuary jurisdictions in the U. S. as of March 2016.

California votes reliably democrat – there will be an escape clause in there somewhere that invalidates the law. This is just Kabuki theater to sooth the irate base.

The obama administration will simply ignore the law and give the grants anyway. If hillary is elected she will double them.

Under the new Department of Justice grant guidelines …

Zero chance of anything actually happening … and I’m sure everybody knows it.

Don’t let them distract you with this. The national issue is the policy on gender neutral restrooms.

There is a zero chance of a Democrat regime enforcing law on another Democrat regime, when the violation of the law is what the Democrats want. There is no rule of law.

Nice start, but why is federal tax money going to states and cities anyway? I would much rather pay higher local taxes and lower federal taxes. If county schools or a sherriff’s department need new equipment, that should be funded by the people in that county. The only way to lessen the influence and control of the feds is to stop the money from funneling through them.