“He has proven his dedication to the children of Baltimore.” 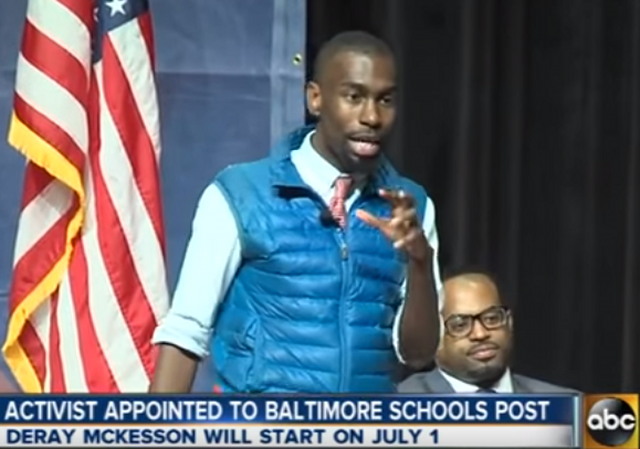 The City of Baltimore has had a rough time over the last couple years. Riots and a high profile legal case, both of which were largely based on race, have dominated headlines.

How is the city helped by hiring Black Lives Matter activist DeRay McKesson for $165,000 to run human resources for Baltimore schools?

Note how the Baltimore Sun has upgraded McKesson to “civil rights” activist:

Mckesson was named interim chief human capital officer on Tuesday by incoming schools CEO Sonja Santelises. It was the second and most high-profile cabinet appointment made by the new chief, who begins her tenure Friday.

Santelises said Mckesson, who spent about two and a half years overseeing key reforms as a strategist and special assistant in the human capital office, would lead the office at least through the fall.

“He has the depth of knowledge of the system, and he has proved that he can lift the work in a short amount of time,” Santelises said in an interview. “And he has proven his dedication to the children of Baltimore.”

Mckesson called Santelises a “gifted leader” and said he was proud to join her team.

“At its core, this role is about finding great people, matching them to the right role, and helping them to develop and experience careers in the service of our kids,” Mckesson said. “I am excited to return to city schools … and to continue doing the work to ensure that every child in Baltimore City receives a world-class education.”…

Mckesson, who will earn a salary of $165,000, will be the district’s third chief of human capital in two years, and manage of a budget of $4 million and 56 employees.

Here’s a video report from the local ABC News affiliate:

McKesson’s role will give him the power to hire people. What happens if an applicant is a Trump supporter? As a recent piece in USA Today illustrates, McKesson’s politics are just what you’d expect:

At 30, he has emerged as a key organizer for the street protests that began almost two years after the police shooting of Michael Brown in Ferguson, Mo. Black Lives Matter staged some protests at campaign events during the primaries, and Mckesson was among the group’s leaders who met with Clinton last fall to discuss their concerns.

“I would not say that this is an election that is between the lesser of two evils,” he told USA TODAY’s weekly video newsmaker series in an interview that took place at the Aspen Ideas Festival, where Mckesson was speaking. “I think that this is an election potentially between a candidate that people are rightfully really concerned about and a candidate that is evil.”

The “evil” candidate is Trump, he said, then elaborated on his qualms about Clinton.

It’s now safe to assume Baltimore has learned nothing over the last two years.

The Black Guerrilla Family in action?

A public servant making $165K per year? I don’t think any government employees are worth that.

“A public servant making $165K per year? I don’t think any government employees are worth that.”

I would agree that public university athletics coaches are way overpaid. But Buckeye football and all the Nike promos bring in way more money than the team costs to operate and coach.

A completely unqualified racist asshat as head of human resources? Why not? We’ve had one as POTUS for almost eight years.

Actually he’s a totally qualified racist asshat, with a degree and previous experience in both the field (whatever THAT is) and in the job in Baltimore.

But, really, it’s just a racket and a way to feed him $$$$ from the public trough until his next big gig as a street agitator and/or run for office.

Or, if he is killed in the next riot, he will get a lot of page-one ink as a fallen dedicated public servant.

He worked in the department in the past, so you get the feeling this is his standby job. Whenever being an activist doesn’t pay enough I guess he comes back to the Baltimore schools in some role or another.

And the next generation Jesse Jackson/Al Sharpton has arrived.

He is probably ideal for this job in the eyes of the city “leaders.” Public schools are tending to follow the academe, and we all know how far left you have to be to have an administrative role, much less an academic role, in college. You read currently about a new push to only hire those who can “demonstrate a commitment to diversity.” Of course, the growing irony is just what diversity means in this case. It doesn’t mean what the dictionary says.

If your children are not Black, but are some other racial background, would they have a chance in this school district? What if you are an employee, is there a place for you? Probably not.

They actually have a “civil rights activist” job description. What’s the level about that, Prosecutor? Well, good to see homies getting propers on the backs of the tax cattle. Stay in school kids.

Will he gave to wear a tie with his blue sleeveless vest and does he have more than one or just never changes?

On the surface, it seems to be [class] diversity (e.g. racism) or some other Pro-choice policy (e.g. Affirmative Action); but, perhaps he is qualified, and was selected in the order of application.

“Qualified” as a Civil Rights Activist?

Baltimore is a lost cause.

“It’s now safe to assume Baltimore has learned nothing over the last two years.”

Did you expect different? I could have called something like this in my sleep.

From ’89 to ’05 I visited that city at least 20 times for various reasons. Over just those 16 years, I perceived a major decline of it. As is the case with so many American cities these days, Baltimore is run by poverty pimps and people hell-bent on preserving the status-quo. They steal the labor of the productive, in order to keep the patronage and other nonsense going.