“He was only there to target officers.” 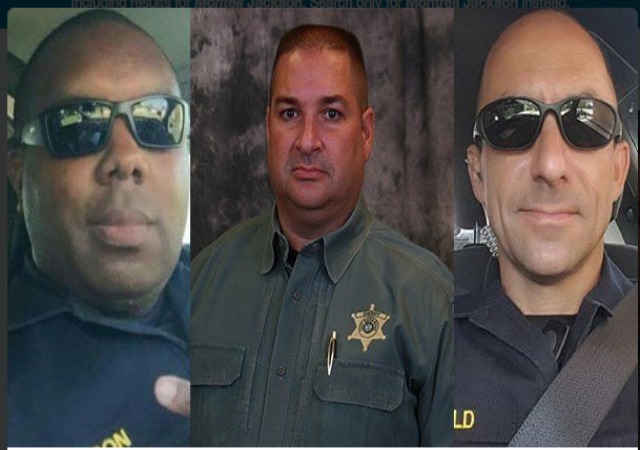 “Our preliminary investigation shows that he definitely ambushed those officers,” Lt. J.B. Slaton, a public affairs commander for the Louisiana State Police, said Monday. “We are still trying to find out what his motive was, and that’s going to be part of our investigation. But we believe he was targeting those officers.”

Authorities shared the video that led them to their conclusion.

Slaton said the police still need “to figure out his motive” and “figure out why he would commit this heinous crime.”

Authorities held a press conference at 2PM CT to provide updates about the case. The authorities said Long ignored the people around him, but shot at the cops instead. They showed the video that led them to this conclusion.

Col. Edmonson says the suspect completely dismissed people in the area. He was only there to attack officers. pic.twitter.com/CabUmptMlO

Col. Edmonson talks about what the law enforcement officers went through. He references the photos: pic.twitter.com/m02xxFiyqq

Col Edmonson says this was the gun used to kill the officers. He also was armed with other weapons. pic.twitter.com/WIWQlxfVgP

Col. Edmonson detailing the investigation & how the shooter proceeded. pic.twitter.com/RiwztUFPZc

The SWAT team took out Long from 100 feet away.

Killed the shooter from 100 yards away. WOW.

“That shot our SWAT team made was a helluva shot,” [Police Chief Carl] Dabadie said. “We’ve been questioned for the last two weeks about our militarized tactics and our militarized law enforcement. This is why.”

“This guy was going to another location. He was not going to stop here,” Dabadie told reporters. “He was going to take more lives.”

The authorities believe Long, who resided in Kansas City, MO, acted alone. They also want to find “any possible connections Long may have had to people in Louisiana or Baton Rouge.” USA Today reported that he may have used “a rental car that had been stolen five or six days ago in a Midwestern state.” They do not know exactly how long he was in Baton Rouge, but they said he might have been there for several days.

The Guardian found his online persona as Cosmo Stepenra, which he used to complain about “perceived injustices against black people,” especially as of late:

Describing the fatal shooting of five police officers in Dallas, Texas, earlier this month as “justice”, Long urged black men to make sacrifices for their race.

He distanced himself, however, from well-known groups campaigning for African American rights.

“I thought my own thoughts, I made my own decisions – I’m the one who’s gotta listen to the judgment,” he said in another clip.

The Daily Caller found a YouTube account connected to Long that showed he belonged to the Nation of Islam and “ranted against ‘crackers.’” He despised protesting, saying that was “for the women.” They reported:

“I just got here I’m not really into the protesting. I do education because that’s our real freedom,” he is heard telling two men in the video.

In the video Long is heard lamented “working for the white people.” He encouraged one man riding in his vehicle as he filmed using a body camera to shop only at black-owned businesses. He brought up a hypothetical scenario in which a family member who wanted to buy carpet was forced to buy from non-black business owners.

“Who’s she going to fuck with? The cracker, the Arab, the Chinese,” Long says in the video.

“These Arabs, these Indians, they don’t give two fucks about us.”

Sounds like he could have had a tenure track position at any one of several universities.

C’mon…!!! He DROVE a stolen car hundreds of miles for the SOLE purpose of killing cops in Baton Rouge.

Was there ANY doubt about this on these facts?

Obviously, there are two many cops. Class diversity demands discrimination and abortion to reduce the disparity.

Really? For a clue, check with his motivator who lives in a taxpayer funded house in Washington, D.C.