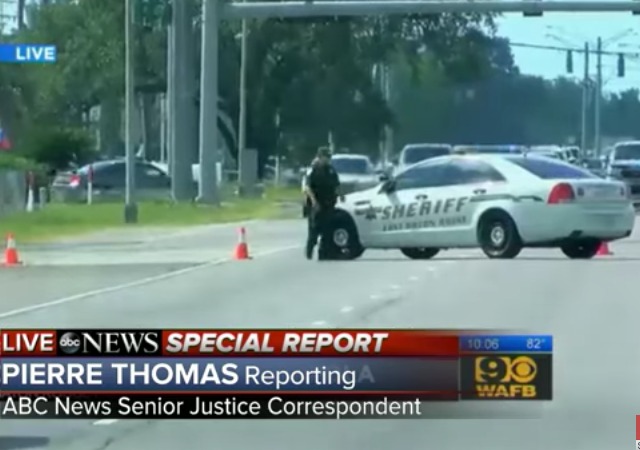 Montrell Jackson, 32, spent 10 years on the force. He leaves behind a wife and 8-month-old son. He wrote this heartbreaking Facebook post on July 8:

Matthew Gerald, 41, served in the Marines and was a “former Black Hawk crew chief in the US Army.” He leaves behind a wife and two children.

Brad Garafola, 45, was an East Baton Rouge Sheriff’s deputy. He leaves behind a wife and four children.

The officers responded to a call about a man dressed in black and carrying a rifle. The shootout between the man and cops lasted about 10 minutes.

Baton Rouge Kip Holden identified Gavin Long as the gunman after they held their press conference:

Kip Holden, the mayor-president of East Baton Rouge Parish, identified the gunman as Gavin Long of Kansas City, Mo. Mr. Long was a former Marine who had served from 2005 to 2010, and he had been deployed to Iraq in 2008, according to military records. He had received a national defense service medal and a reward for good conduct.

Mr. Long is believed to have been the only gunman, the police in Baton Rouge said at a news conference, despite earlier reports of two others being at large. Col. Mike Edmonson, the superintendent of the Louisiana State Police, said there was “no active shooter scenario going on in Baton Rouge.”

USA Today reported that he may have used “a rental car that had been stolen five or six days ago in a Midwestern state.” Today was also his 29th birthday. Records show he lives in Kansas City and Grandview along with Tuscaloosa, AL, where he attended The University of Alabama.

The Guardian found his online persona as Cosmo Stepenra, which he used to complain about “perceived injustices against black people,” especially as of late:

Describing the fatal shooting of five police officers in Dallas, Texas, earlier this month as “justice”, Long urged black men to make sacrifices for their race.

He distanced himself, however, from well-known groups campaigning for African American rights.

“I thought my own thoughts, I made my own decisions – I’m the one who’s gotta listen to the judgment,” he said in another clip.

The Daily Caller found a YouTube account connected to Long that showed he belonged to the Nation of Islam and “ranted against ‘crackers.'” He despised protesting, saying that was “for the women.” They reported:

“I just got here I’m not really into the protesting. I do education because that’s our real freedom,” he is heard telling two men in the video.

In the video Long is heard lamented “working for the white people.” He encouraged one man riding in his vehicle as he filmed using a body camera to shop only at black-owned businesses. He brought up a hypothetical scenario in which a family member who wanted to buy carpet was forced to buy from non-black business owners.

“Who’s she going to fuck with? The cracker, the Arab, the Chinese,” Long says in the video.

“These Arabs, these Indians, they don’t give two fucks about us.”

The Baton Rouge police will hold another press conference on Monday at 1PM CT.

How come the SPLC hasn’t issued a statement yet? I thought they closely monitored all people and groups who hated based on race and especially people with an anti-government twist. Oh, that’s right. Only “certain” types of people are monitored.

Muslim convert as well. Media cautiously sidestepping that note. CAIR standing ready with its legions of flying monkeys ready to assault legally any media outlet that mentions the Muslim connection. Obama will most certainly be perplexed by Long’s motives.

Just a note, I have already seen the anti-second amendment people revving up their propaganda even though gun control had nothing to do with this. I was shocked/ not shocked by the event happening in Louisiana, but this non-sense needs to stop, it is nothing more than one huge threat to society, American society, as a whole! Wake up America, it’s a slippery slope!

At least those who usually don’t miss the chance to talk about gun control are silent so far – especially Obama, Chuck Schumer, and the elected class. Not sure who you see spinning up their gyro, but no doubt they will target the long gun the murderer was able to use.

Police officers assassinated again! Our leaders are out to lunch!

As our nation moves more towards a lawless society!

You had better be prepared America!

That’s actually a not-insane question. You should pick one or several, write them up, and submit them to the Prof.