After Smiley Speaks of ‘Killer Cops,’ Brian Williams Wants to Appoint Him President

After Smiley Speaks of ‘Killer Cops,’ Brian Williams Wants to Appoint Him President

Smiley’s Insistence That We Speak of ‘Vicious, Despicable, Cowardly Killer Cops’ Gets Brian Williams So Excited He Wants to Appoint Him President 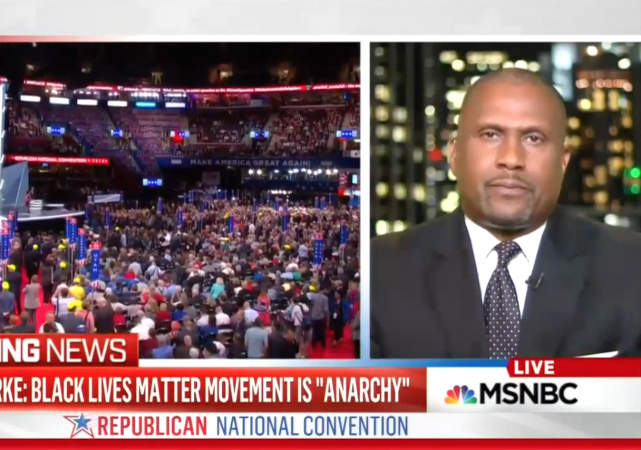 This could go down as the most egregious example of an MSM “anchor” groveling at the feet of a liberal activist . . . During MSNBC’s coverage of the opening night of the Republican convention, Tavis Smiley complained that, unlike cop killers, “killer cops” are not called “vicious and despicable and cowardly and reprehensible.”

TAVIS SMILEY: It’s one thing to call the cop killers, and certainly in Baton Rouge and Dallas, these African-American cop killers, vicious and despicable and cowardly and reprehensible. But we don’t reserve that kind of language for killer cops. And so it’s not either/or, it’s both/and. If all lives matter, then cops have to respect citizens and citizens have to respect cops and we can’t scapegoat a particular set of protesters who are trying to get us to respect, to revel in the humanity of all of our people.

BRIAN WILLIAMS: Tavis, if I appointed you president and and if you still refused to run we’re just going to have to appoint you.

In Brian William’s mind, he alone does appoint the President.

Evidence of “vicious and despicable and cowardly and reprehensible” media bias in full bloom for all to see.

We’ve learned not to call the cops those things because, over and over, the full facts have shown that the cops were just doing their job, in the face of vicious behavior by criminals.

The simple truth is, I used to think the police were rougher on blacks. But after all the cases celebrated by BLM, I have come to respect cops’ restraint. Black criminals act like wild animals around the police.

Tacos Smiley is a fool, a quota filling fool! If called out, like Barry, he will call you a bigot.

Normalizing elective abortion (and Planned Parenthood) has forced a progressive slope for America.

Its really interesting that for all their bluster and screeching there is not a single shred of evidence to support their claims. In fact almost twice as many white people are shot than black people. Here is a great analysis.

With all the claims of killer cops, racist cops, and so forth, and with so many judges (both black and white), juries, and investigations (both local and federal)all finding the overwhelming majority of those accused officers to be innocent of all charges, it would seem to be a case of the Left and those allied with the BLM movement to be learning disabled. If a black judge, if a jury made up of black and white jurors, if a federal investigation conducted under the watch of a black AG cannot find any truth to the claims of criminal or racist behavior to those involved in the Trayvon Martin shooting, the Freddie Gray death, the Michael Brown shooting and so many others, then how can these people legitimately continue to scream about racist and killer cops and how dare the public believe their tripe.