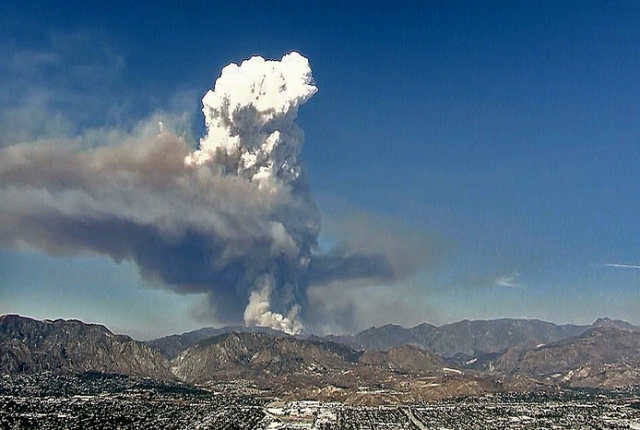 Many Americans are closely watching the dumpster fire of the Democratic National Convention.

However, a true wildfire is blazing near Santa Clarita, the third largest city in Los Angeles County.

The effort to control the raging Sand fire in the Santa Clarita Valley mountains has drawn firefighters and emergency crews in the hills toward Acton. So far, the fire has burned an estimated 33,172 acres and continues to threaten hundreds of homes.

The blaze has prompted the evacuation of at least 10,000 homes and fire remains only 10% contained. At least 18 structures have been destroyed.

The scorched body of a man was found in a car of a home’s driveway in Santa Clarita.

It’s so large and fast-moving, fire officials have used the term, unprecedented.

The fire has burned about 10,000 acres per day since it began Friday in the hills north of Los Angeles, growing at a rate firefighters described as “almost unprecedented.”

“It has averaged about 10,000 acres per day,” said Chief Mike Wakoski, incident commander. “An acre is a football field, so imagine that — 10,000 football fields per day.”

WATCH #LIVE: The raging #SandFire that forced thousands from their homes continues to burn: https://t.co/d0126ZB5CX pic.twitter.com/OoYndKdLBd

The blazes have destroyed the homes of several firefighters.

…Sergio Toscano, a Marine veteran and a firefighter with the U.S. Forest Service since 2012, was battling a blaze in the Cleveland National Forest near San Diego when the Sand Fire erupted in the Santa Clarita Valley area.

When the Sand Fire — which has so far killed one person, destroyed 18 homes and scorched 33,000 acres at only 10 percent containment – raged through the Bear Divide Ranger Station, it destroyed the homes of Toscano and two other U.S. Forest Service firefighters….

Yesterday, we had a couple incursions in our airspace, which is already a very dynamic and very busy time for our aircraft during the firefight as the fire comes down to the neighborhoods,” Angeles National Forest Fire Chief Rob Garcia said at a morning news conference.

Drones flying over the area had the potential to impede firefighter efforts from the air as they worked to protect property, Garcia explained. Crews are utilizing 26 helicopters in their efforts to contain the massive inferno.

High temperatures, low humidity and 3 decades of brush build-up are contributing to the Sand Fire’s devastating intensity. The cause of the conflagration, which broke out close to the 14 Freeway near Sand Canyon, is not currently known and will be fully investigated.

And while San Diego is a couple of hours south of this event, we have noticed haze and smokey sunsets as a result of the firestorm. Many images taken by Californians in the area of this fire are stunning.

Hopefully, our firefighters will be able to contain and control the Sand Fire before too many more sunsets go by.

“Scorched” means superficially burned. As in, on the surface.

It’s not mere pedanticism; the meaning of the text is imperiled. A routine controlled burn to remove old dried underbrush “scorches” the ground, the bark of trees, etc. So, if 33,000 acres are scorched, that’s annoying if one is a small woodland animal living in the vicinity, but not a matter of great moment to people or trees. A man “scorched” will tell you about how it’s even worse than sunburn, and he’ll need a new wardrobe and may look funny with most of his hair burned off, but he’ll recover with minimal treatment.

The meaning “to destroy by fire” is considered archaic by the Miriam-Webster Second Unabridged, which should be good enough for us mere mortals.

In a phrase such as “scorched earth” the meaning is a bit more draconian.

What is your point, Tom? Author Leslie used the word “Scorched” once, in reference to the body of a man found in his car. This would meet your definition of “Scorched.” Furthermore, the word “Scorched” was used twice in the article. Once by Leslie, once in a quote from the CBS local article linked in embedded text.

If you want to make a point that the kindling material in the forest has caused this fire to exponentially grow, make the point. Otherwise, quit coming here to comment, supposedly show your “Superior Intellect” and trash on the authors here at LI.

Yes, we get it, Trump won the nomination. Move on.

Thanks Quiksilver. My neighbor has a great description for folks like TS: constipation of thought and diarrhea of the mouth.

once, in reference to the body of a man found in his car. This would meet your definition of “Scorched.”

To belabor the bloody obvious, no, it would not meet the definition (and no, that’s so cute, but it’s not “my” definition) of “scorched”; the gentleman was not scorched, he was killed. Perhaps now you begin to grasp the utility of using English words in standardized ways.

If you want to make a point that the kindling material in the forest has caused this fire to exponentially grow, make the point.

I made no such claim. I haven’t the faintest idea what caused this fire to spread.

Is English not your native language? That would explain your weak comprehension.

It seems you were close to reaching a conclusion, “A routine controlled burn to remove old dried underbrush “scorches” the ground, the bark of trees, etc.” Instead, YOU continue YOUR attempt to demean and delegitimize the authors here at LI. YOU are creating an issue where no issue exists.

Unfortunately, you still have yet to answer my initial question: What is your point, Tom? Leslie used the term ONCE! So what!!

I fully understand the English language. As many people know, dictionary definitions do not trump everyday usage of terms in the vernacular.

Yes, we get it, Trump won the nomination. Move on.

It seems you were close to reaching a conclusion

So you concede your lack of comprehension. Most gracious of you.

YOUR attempt to demean and delegitimize the authors here at LI

Not at all. The writers here at LI are not idiots who insist that they’re universal experts on everything. A person who writes news stories is usually—if not of fragile ego, and actually interested in using the tools of the trade to produce a quality product—capable of correcting his command of vocabulary, especially when careless mistakes obscure the facts of the story. I went to the trouble of pointing out exactly how the mistakes do just that. An inferior writer will take offense; a more serious person will consider and adapt.

What is your point, Tom?

Sorry, if you still can’t grasp the obvious even when it’s explained at tedious length, there’s not much I can do.

And sorry (again), you must be of Superior Intellect™, but I find the meaning of your prattling about Trump somewhat evasive in this context.

Damn! Look at the time. My apologies, but I really can’t waste any more time on this persiflage.

On 7/17/2004 a large fire occurred just West of today’s fire and up against the Hwy 14’s East side. We lived about 1.5 miles from the 14 on its West side in Santa Clarita. Fortunately the fire did not jump the freeway. The 2004 fire was moving lickety-split and was a sight to behold. I find it hard to believe that today’s fire in nearly the same area is moving at an “unprecedented” speed. Everything is “unprecedented” or “extreme” these days isn’t it?

Not to worry. The floods will put out the fires.

this winter’s El Nopeo brought very little rain to The Valley and environs, so i doubt next winter’s La Nina will bring much either. we won’t see any rain here until sometime this fall, but, if it does, all those burned hillsides will be ready to slide.

me? i can just look out the window…

My brother in Northridge sent me a photo of the smoke overhanging the San Fernando Valley on Saturday. Since then it seems to have moved away from the Valley; good for them but not good for the folks up in the hills.

The September 12, 2015 wind-driven Valley fire in Lake County, NorCal spread to 40,000 acres in less than 12 hours. I would call that almost unpresented. Amazingly only two people died. Stay safe fellow Californians in the San Gabriel’s. Hope the winds die down.

The reason wildfires have become so much bigger and more devastating in the last 20 years is the policy, begun under Clinton and continued and expanded by Obama, to reduce logging in national forests. Modern timber management controls wildfires naturally on large tracts owned by timber companies and other private owners.

Instead of “saving” their beloved trees and animals from the axe, “environmentalist” policies mean more are destroyed and no one benefits at all.