The harsh truth about [omitted] and [omitted]… 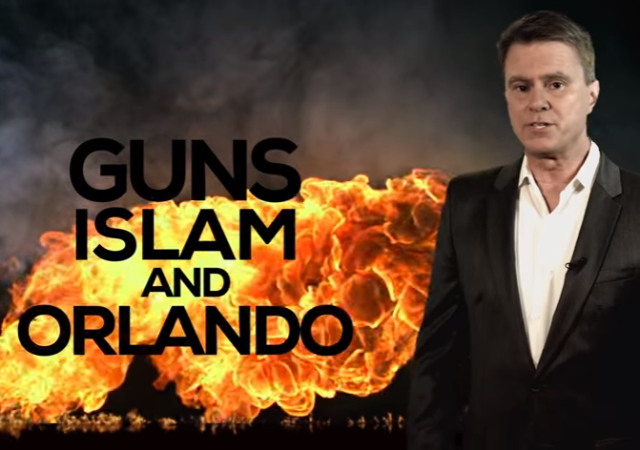 Bill Whittle’s new Firewall video is pretty intense. In four minutes of commentary, he offers the straight dope to Obama and other Democrats who refuse to recognize the threat of radical Islam while trying to blame guns.

Whittle’s message is largely a response to the terror attack in Orlando and he addresses it with unvarnished and sometimes harsh truths.

49 people are dead in Orlando, in the worst mass shooting in the nation’s history.

Barack Obama’s initial public statement concerning this latest unspeakable horror can be summed up in a few sentences:

Third: We Americans are to blame.

Fourth: This is just another case of homegrown extremism.

The word Islam never came up during the Presidents initial remarks to the nation, so let me see if I can fill in a bit of his educational deficiency.

Mr. Obama, the word Islam means “submission” and the religion of Islam divides the world into two spheres: Dar al Islam, which means the house of Islam — the House of Submission — and Dar al Harb, or the House of War. Islam has been at war with every other religion on earth since Mohammed began his conquests.

I’m rather surprised you haven’t heard of them.

You can watch the whole thing below.

Once again, Whittle has done the job the American media won’t do and he’s absolutely right.

Sometimes it’s hard to tell which is worse; that our leaders lie to our faces, or that some people actually believe them.

What is the matter with you ?!

Pretty much sums up my stance on Obama and his “policies”

“Once again, Whittle has done the job the American media won’t do…”

The “American media” is not a news organization. You can give up that hope.

Thank you for bring this video to our attention. Bill is always a great source for logic and truth.

So when are the Koch brothers or Adelson going to buy out one of the networks so a conservative POV gets aired? Bill needs to appear nationally over the air so the low information voters can become informed…they never will be so long as the current propaganda networks exist in their current manner.

Bill is a true treasure!

Daily standard reading for every American,

After the Orlando shooting and before it was revealed that the shooter was likely a closeted homosexual, BBC News Hour on NPR interviewed a British Muslim who himself is gay and he admitted that as repentance he became radicalized and was planning bombings in London before he came to his senses. He told how his family which would be considered normal peace loving Muslims per Obama, told him that homosexuals had the devil in them and were to be killed. They also taught him that “Islam is at war with left” (his exact words) but because they took an oath to England when they became citizens, they should not attack it. These are the messages that normal run-of-the-mill Muslims are getting in their own homes not from radical Imams or terrorist websites. Bill is 100% on point as usual.