“In practice, Sweden will pretty much be a cashless society within about five years” 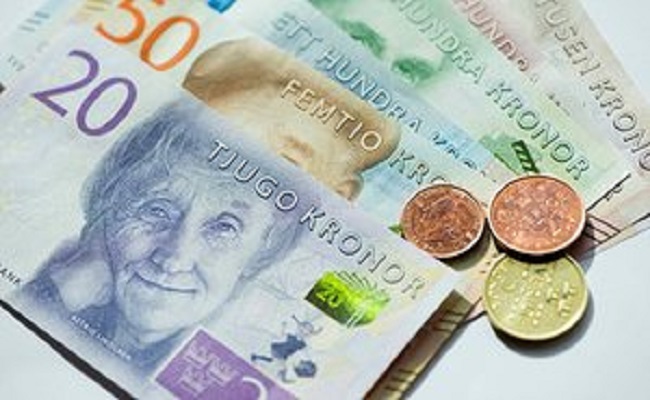 We’ve been hearing a lot about the movement toward a cashless world, and Sweden now appears to be leading the race to become completely cashless.

“I don’t use cash any more, for anything,” said Louise Henriksson, 26, a teaching assistant. “You just don’t need it. Shops don’t want it; lots of banks don’t even have it. Even for a candy bar or a paper, you use a card or phone.”

Swedish buses have not taken cash for years, it is impossible to buy a ticket on the Stockholm metro with cash, retailers are legally entitled to refuse coins and notes, and street vendors – and even churches – increasingly prefer card or phone payments.

According to central bank the Riksbank, cash transactions made up barely 2% of the value of all payments made in Sweden last year – a figure some see dropping to 0.5% by 2020. In shops, cash is now used for barely 20% of transactions, half the number five years ago, and way below the global average of 75%.

And astonishingly, about 900 of Sweden’s 1,600 bank branches no longer keep cash on hand or take cash deposits – and many, especially in rural areas, no longer have ATMs. Circulation of Swedish krona has fallen from around 106bn in 2009 to 80bn last year.

“I think, in practice, Sweden will pretty much be a cashless society within about five years,” said Niklas Arvidsson, an associate professor specialising in payment systems innovation at Stockholm’s Royal Institute of Technology (KTH).

Interestingly, Sweden has adopted a number of means for cashless transactions, including those to homeless vendors and church donations.

Street salesmen, from hotdog vendors to homeless magazine sellers, have enthusiastically adopted iZettle, a cheap and easy Swedish system designed to allow sole traders and small businesses take card payments via an app and mini card-reader plugged into their phones, with many reporting sales increases of up to 30%.

Even Swedish churches have adapted, displaying their phone numbers at the end of each service and asking parishioners to use Swish to drop their contribution into the virtual Sunday collection. One Stockholm church said last year only 15% of its donations were in cash; the remainder were all by phone.

There is, however, some concern about Sweden’s move to a completely cashless society.

There are, obviously, concerns: cases of electronic fraud have more than doubled in the past decade and several critics – including the inventor of iZettle, Jacob de Greer – have asked whether an entirely electronic system in which every single payment is recorded is not a threat to privacy.

Old people’s organisations also fear that those who prefer cash, out of a reluctance to use new technology or simply because they find it easier to keep track of their spending, will be disadvantaged, while educators worry that young people will be tempted to spend money they do not have.

For these and other social reasons, Arvidsson said, cash is not dead quite yet. “Even if, in the next few years, Swedes use almost no cash at all, going 100% cashless needs a political decision,” he said.“The idea of cash, even in Sweden, remains very strong.”

The New York Times reported on these and other concerns late last year:

Sweden’s embrace of electronic payments has alarmed consumer organizations and critics who warn of a rising threat to privacy and increased vulnerability to sophisticated Internet crimes. Last year, the number of electronic fraud cases surged to 140,000, more than double the amount a decade ago, according to Sweden’s Ministry of Justice.

Older adults and refugees in Sweden who use cash may be marginalized, critics say. And young people who use apps to pay for everything or take out loans via their mobile phones risk falling into debt.

“It might be trendy,” said Bjorn Eriksson, a former director of the Swedish police force and former president of Interpol. “But there are all sorts of risks when a society starts to go cashless.”

[Featured image via The Guardian]

One very easy way for the government to take total control of your money… go cashless.
Socialism is alive and well.

Wow, that is exactly what I was going to say! I completely agree.

Not just your money but control your whole life!

And the next time Hillary decides to “gift” diabetic amputee lesbians or whomever, they just deduct 10% from your “wealth”. Viola, instant tax reform.

Hillary lost a leg? I didn’t think the sniper hit her.

I thought that I read somewhere that Venezuela was going cashless too.

Greece tried it briefly as well.

Thank you, Sweden, for being the guinea pig.

Sweden will NOT be cashless [as in not using physical currency, being broke is something different that they might experience] in 5 years. By 5 years from now a variant of either the ISIS Dinar or the Iranian Rial will be the medium of exchange in Sweden. Jizya has to be paid in hard currency.

Germany is the opposite. It has very liitle use of cash alternatives.

Translation: The government wants to be able to track every dollar you get or spend, and where, and with whom.

Oh, the warning is far older than that…..

“And none might buy or sell, unless he had the Mark.” Revelations

Just because it isn’t literally stamped onto you doesn’t mean it isn’t there.

So someone wrote TIm Geitner is a tax cheat on every piece of currency they have and now they are cashless.