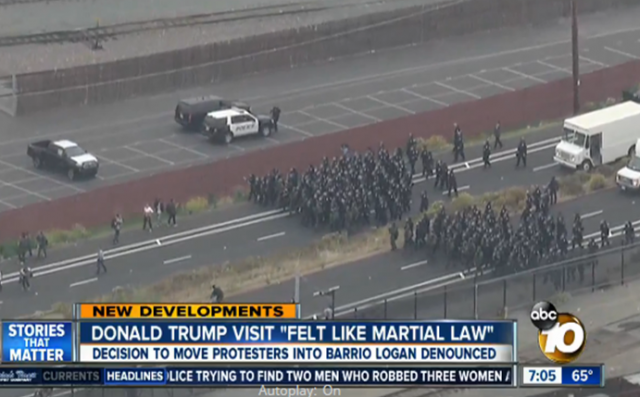 Legal Insurrection readers will recall that security was tight at the Donald Trump rally I attended, and was full deployed after the event to avoid a another Albuquerque-style riot from occurring.

Most San Diegans were thrilled that our police department was diligent about implementing effective security measures.

However, progressive activists were exceedingly unhappy at the level of containment our police force achieved. A group of their “leaders” held a press conference in Barrio Logan, the staging area of anti-Trump marchers that day, to complain about….martial law!

…During a late-morning news conference in the bayside neighborhood, the group of activists voiced their complaints about the heavy paramilitary-style law enforcement presence at the Friday afternoon campaign event, during which 35 protesters were arrested, including city attorney candidate Bryan Pease.

“It is reprehensible that Mayor (Kevin) Faulconer and (police) Chief (Shelley) Zimmerman ordered riot police and armored vehicles to descend into Barrio Logan, a historic community with a rich tradition of advocating for civil (and) human rights and the self-determination of the Mexicano community,” said Kiki Ochoa, a member of Union del Barrio, one of the organizations that led a contingent into downtown San Diego from Barrio Logan to protest the Republican presidential candidate’s appearance.

…Ricardo Favela of Alliance San Diego said the area was turned into a militarized zone, threatening residents and scaring families.

“Law enforcement officials dressed in riot gear with armored vehicles behind them, marched in a wall of force that stretched the width of Harbor Drive, pushing a small number of protesters from downtown San Diego into the residential area of Barrio Logan, over a mile away,” Favela said.

The reports playing today kept referring to “small tanks” to add to the saga’s drama. These “tanks” are actually small armored support vehicles used in the deployment after unlawful assembly was declared, and members of the crowd refused to disperse.

“San Diegans demand that Mayor Faulconer and Chief Zimmerman account for their actions that created unnecessary tension and arrests in Barrio Logan,” Pedro Rios [director of the American Friends Service Committee in San Diego] said. “The use of small tanks and riot police against San Diego residents has no place in America’s Finest City.”

Actually, as a San Diegan, I am really good with what Police Chief Shelly Zimmerman arranged. There were no “tanks” anywhere to be seen, but plenty of Mexican Flags.

I think it is worthwhile looking at some of these malcontents.

Bryan Pease, our erstwhile City Attorney hopeful, was one of the 35 who managed to get arrested.

“I was tackled by several police officers for filming their riot (Friday) following the Trump protest, when they forced all protesters all the way to Barrio Logan,” Bryan Pease, candidate for San Diego city attorney, said today in a statement. “Message: go back to Barrio Logan.”

“I was then held for 10 hours in a cramped, filthy jail cell with 20 other individuals similarly falsely arrested until our bail of $500 each was processed,” Pease said

Perhaps if the protesters had not tried to breach the secured area, then the police force may not have had to declare “unlawful assembly“? Perhaps if Pease dispersed when the order was issued, he would not have been arrested?

Kiki Ochoa’s Union del Barrio prepared a synopsis of the event which reads like a progressive fantasy. Here is a snippet:

Participants repeated slogans like ¡Trump Fascista – Tu Eres Terrorista! and ¡Luchar, Luchar – Luchar Contra Trump! throughout the event, which began with a short rally in the park and moved on to become a march down Cesar Chavez Parkway and Harbor Drive, right up to the main entrance of the San Diego Convention Center.

Pedro Rios’ organization, American Friends Service Committee (AFSC) is a Quaker organization that supposedly promotes lasting peace with justice, as a practical expression of faith in action. The group’s next project? Advancing peace and justice at the Republican National Convention.

Finally, Ricardo Favela’s Alliance San Diego looks like one of the fruits of the ACORN tree:

…[In] 2007, when a small group of organizers from different communities, drawing on lessons from other cities, launched Equality Alliance of San Diego County (commonly known as Alliance San Diego), an organization focused on building coalitions to promote social justice and social change.

It was an unmet need whose time had come: While individual organizations could point to progress and victories in such key areas of social justice as educational access, immigrant rights, and tax and fiscal equity, vast areas of need remained, new challenges continued to arise, and some issues continued to intensify and grow.

Quick, someone call the WAAAMBULANCE fast our “whine” may replace craft beer as San Diego’s most famous beverage.

Hell’s Bells, I’m not a Trump supporter and even I can see how this just makes his case stronger.

But you do appear to be a Jim Butcher fan.

There would be no need for security if they’d just stop infringing other people’s rights.

There would be no need for riot gear or armored vehicles if they’d just stop rioting.

This reminds me of Chicago in the late ’80s.

There was a small area of six-flats inappropriately called “Magnolia Glen” in the process of being bought up by people who could not afford to live closer in (this area was at the top of Lakeshore Drive, almost to Evanston). Not many years before, the area had been really gritty. But now, urban pioneers were moving in and re-habbing.

And so, somebody organized the remaining prostitutes and drug users to protest “gentrification,” as if it were a bad thing.

They should move to Baltimore.

SDPD just moved them into a Safe Space. I thought that was considered good for children.

May be the progressives need to live under martial law! It would be safer for the general public so progressive cannot “peacefully Protest” while destroying things.

They’re protesting against the right to support the candidate of one’s choice, which is fine with me, if they’d do it lawfully and peacefully. Still, it’s not very democratic of them.

One would think an intelligent lawyer who seeks to represent the city would be smart enough *not* to put himself in a position where he would be arrested for breaking the law, particularly when all he would have needed to do was ‘Go away.’

Is there a (D) after his name, perchance?

Yeah, if it was up to me, I would be looking at his employment contract.

I’m sure “edgeoftheTDSbox” will be along soon enough to tell us how the protests are all organized by Trump’s good buddy, Soros.

This coming from a Cruz supporter: Don’t think for one second that the protests are unique to Trump. If the presumptive nominee was Cruz, Bush, Rubio, Christie, or one of the remaining 11 contestants, the leftists would be out doing the same thing.

We already know you ride the Trump Train, and it works best now to play the victim.

Fact of the matter is that the boycotting, rioting, astroturfed protestors of the left will always attack the Republican. This is what we have learned over the last eight years and seen in such “movements” as Occupy. The “Foreign Invaders” you speak of are only a fraction of the total protestors. Trump is avoiding other segments of the professional protestor. For example, he is in favor of transgenders using the bathroom of their choice and has avoided the outrage of the LGBTQRSTUV consortium.

Except he’s walked back every single one of his proposals now that he’s got the nomination “sewed up.”

I wonder. Were any of the protestors enrollees in Trump U? You know, the senior citizens who were bilked of $35k (their life savings) by you know who? Were there any vets protesting? You know, those who had been waiting for their “I’m gonna do so right by you” Donald donations?

The media finally had to hold Trump upside down and shake him to get him to let go of the money. Trump’s head turned Cheeto-red when they held his feet to the fire.

WRONG thread for your non-sense posting.

Those groups are not organized, you know.

“You know, the senior citizens…”

Sure Jennifer, lots of seniors signing up for business / real estate classes.

You simply make shit up and have no idea what you are talking about.

You would benefit from taking some Trump U classes. Might learn something.

“making shit up” seems to be one of the primary symptoms of TDS.

So this Jennifer supports the “right” of leftists to riot.

Reading must not be a Trump U course, because she said nothing of the kind.

One of the losers who is the main complainer put the $35,000 on a friggin CREDIT CARD!!!

Anyone that stupid would have failed a college course in crayon art.

Get a clue…. They were warned time after time to disperse that this was declared an unlawful assembly.

They (protesters) came to try to disrupt the Trump rally.
Maybe not everyone but some decided to break the law and law enforcement responded!

If you riot and decide to fight the police in the street.
You are going to get your rear end beat!!

You’re damned if you breathe or pay the carbon credit.

Alternatively, you’re damned if you survive or undergoing “planning”.

Another good post Leslie.
Thank you. You own San Diego.

Trump plans to campaign heavily in CA and NY. I’m not sure the MSM will get the “right” message for the general election, though.

Despite all the weeping, wailing, caterwauling, and lamentations
Drama queening, dead-to-me-ing and ostentatious masturbations
At the end of the day, the Hillary Helpers of NeverTrump
Have barely amounted to a butt pimple’s bump 🙂

This insanity is the result of the nearly a billion dollars that Obama gave to Democratic front organizations as part of the $15 billion dollars he extorted from Bank of America.