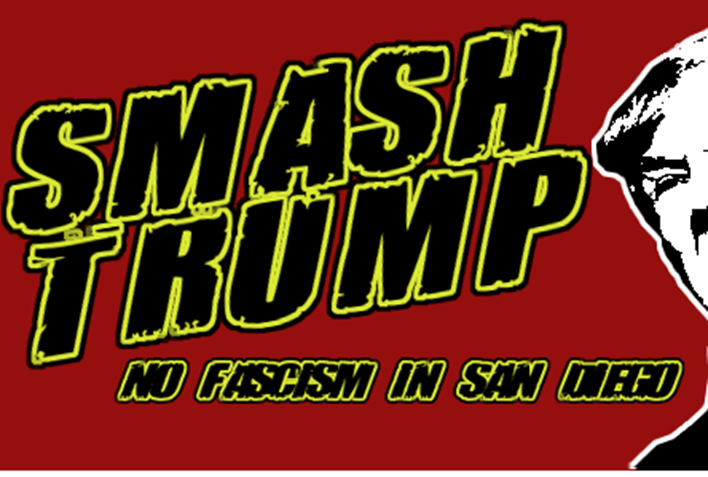 This Friday, I had planned to take my teen son to the Donald Trump rally at our Convention Center.

I am now mulling over a change of plans, due to the level of organized leftist violence that has targeted the presumptive Republican presidential candidate and his campaign.

The anger, derision, and chaos directed at Trump supporters and the security teams at the event in Albuquerque was absolutely astounding. Four arrests have been made (with more likely to occur soon), and the city cleaning crews are still mopping destruction left in the wake of Wednesday night’s protests.

The progressives targeted both humans and animals in their fury:

Some of the protesters got unruly, causing damage and clashing with police. Fights broke out on the streets, rioters clashed with law enforcement.

At one point, rocks, a barrier and water bottles were thrown at police horses.

APD says its horses went to the vet Wednesday to be checked out after getting pummeled. They were all cleared by the vet and will be back in service Wednesday night. The nine riders who were on the horses last night suffered minor injuries.

According to APD, every police officer that responded to the violent protest was hit with rocks or debris. Six officers suffered significant injuries to the face, nose, arms and legs after being pummeled with fist-sized rocks. They were treated by rescue personnel on scene.

I thought progressives preferred horses to humans! Perhaps these were not the right kind of horses?

In Anaheim, the security had already been enhanced…based on the riot that occurred in the wake of Trump’s Costa Mesa rally last month.

And while the leftist agitators were well-contained, they did manage to start a dumpster fire and several protesters were arrested.

After Trump departed, a small group of protesters remained in the area, ignoring orders by police to disperse. One trash can was set on fire, some protesters threw rocks, and large throngs of police were trying to push the remaining demonstrators away.

At least seven adults and one juvenile were arrested over the course of the day — with many taken into custody after police declared unlawful assembly.

“You can’t arrest all of us,” one woman shouted. Another group of anti-Trump demonstrators continued to linger, yelling, “Mexico! Mexico!”

Trump has paid for and permitted these events. Therefore, when the “protesters” storm into his event, they are no longer engaging in “free speech” but in disruption and thuggery. Even so, Trump handles the interruptions during his address with humor and aplomb, as shown in this video of his Albuquerque appearance (hat-tip Lorraine Yapps Cohen).

San Diego officials are already gearing up for Friday. Police Chief Shelley Zimmerman said, “For anyone who comes to disrupt, to do illegal activities, we will take swift and decisive action to make sure we have a peaceful event.”

The pre-planning is appreciated, because our local gangs of progressives are already organizing a rather warm reception for the GOP’s likely presidential pick: SmashTrump San Diego Anti-Trump Rally.

Frank Gormlie, one of the organizers who use to set-up counter-events to our Tea Party rallies, is promoting this demonstration:

…There’s at least six different networks or groups mobilizing their supporters to show Trump that San Diegans will not stand for him. The groups range from Republicans, Democrats, to anarchists, and social justice veterans, to the Unión del Barrio and border activists. These groups will all have their own tactics, displaying a diversity of opposition to Trump. And then there’s the janitors – hundreds of them will be demonstrating and marching through downtown.

…So, it’s gonna be a wild and crazy time in downtown San Diego on Friday. Wouldn’t miss it.

Having an opportunity to see a presidential candidate in person is a historic event, and I wouldn’t want to miss it, either. My son has been especially excited, as he is out of school that day and this is the first election he has been following closely.

When I asked what he thought about the developments and if we should still go, Blake said:

They are acting like terrorists. They are using fear to try and stop people from doing and thinking what they want. We shouldn’t let them change what we are doing.

So, at this point, it looks like we are boarding the Trump Train for an excursion to downtown San Diego.

Don’t let the masked cowards of the left stop you, Leslie!

In 2016, these thugs are what modern civil war looks like.

There is a difference between spontaneous rioting and planned rioting. FTS.

I wish you good fortune at the rally.

To go off topic. Ian Anderson is what Holmes would call a “most singular” person. I look forward to Bouree and Too Old To Rock and Roll.

To go a bit off topic musically I just came across a wonderful “offical video” of Mr. Blue Sky on youtube. Captures the coming good weather rather well.

Only liberal fascism will be allowed!

These progs suffer from a complete and utter lack of self awareness, don’t they?

Those attending the Trump rallies should arm themselves with weapons for self defense. If not a firearm or a knife then perhaps a cane. It’s not illegal to carry a cane and they can be useful in time of need.

Remember the Westboro Baptist Church and their attempts to disrupt funerals? This is much the same, only more violent. The reason for the rising amount of violence is that the Trump supports have continued to act with good will and restraint.

Remember also, the Donald Trump himself has called for restraint on the part of his supporters, because if they react, the press is going to loudly announce that his supporters are violent.

This morning’s San Diego Union-Tribune had misleading headlines that suggested that Donald Trump’s events have been “rowdy,” only to disclose later that it was the protesters OUTSIDE the rally that were violent, causing both personal injury and significant property damage.

I have been going to political rallies since the 80s. Never have I had so much fun than at a Trump rally. Met the nicest people. All types – it’s a diverse crowd. Don’t be surprised though by all the Secret Service guys with guns. He is getting max protection now. Still he goes into the crowd, shakes hands, signs MAGA posters, poses for pictures. It’s great. Tremendous spirit.

It’s widely believed that the violence is paid for by George Soros. But George Soros is a friend of Trump, he financed Trump’s Chicago tower. Why doesn’t Trump pick up the phone and call him and tell him to knock it off?
I decry leftist street violence, I find the intimidation of Cruz delegates a far more serious transgression. This is done at the top level of Trump’s campaign. because it doesn’t come with ready-made visuals, doesn’t get as much attention.
Can anyone explain why Trump who has Jewish relatives is actively courting neoNazis and other related scam? Could it be because he sees a unique place for them in his movement? Really, why?
Finally, Trump has a long history of administration of various dictators and strongmen. He hasn’t a clue about the Constitution and the Bill of Rights (AltRightie Trumpkins are dismissive of both) and, while his supporters are a clearly a target of violence, Trump does not offer the solution. What we need is the constitution and rule of law, not trumpism.

You are a damn nut.

You have the best arguments.

It would take a nut to think what you wrote is an argument. It’s not even informed speculation.
It’ just nuttery.

Fascist leftists breaking the law and oppressing free speech have the gall to call Trump a fascist.

I think we see through this obvious lie.

Berlin street brawl. We’ve seen it before. Just because one side is fascist doesn’t mean that the other isn’t.

And the Soviets called their empire a democratic republic.

If a committed, politically active person like you is wavering, perhaps the bad guys are winning.

Do these protestors ever get convicted? Or are charges quietly dropped a few weeks or months later?

The projections are coming fast and furious. The pursuit of monopoly power unites and embitters Marxists, communists, socialists, and fascists in a common cause.

That is why they must be stopped before this now so-called Great Nation has the final nail pile-drived into its coffin.

I wasn’t planning on going but now I am. I’m protesting the protesters.

I think it’s very important to be with neither BLM nor Trump.

Progressives, Far-Left Screwballs, Socialists, whatever you wish to call them, are trying to eradicate this most successful and generous country in history. As a San Diegan I am ashamed that such terrorism of Trump supporters will occur in “America’s Finest City”.

I’m not sure what the Lefties are so upset about. He’s one of them, has been his whole life.

People change. Heck, there is even a tiny handful of folks who used to think they were conservatives until Trump got the nomination and they jumped ship to help Hillary by refusing to vote for her leading opponent.

But there are some people who are very consistent.

Like you, you lying POS. People came to the conclusion months ago they could never support your stinking, lying, pathological Collectivist fraud on an condition. We said so.

Proving, again, you are a lying POS. Consistently.

You’re drooling the foam from your mouth again, Rabid

No, liar. You lying like the POS you are is as common as dirt. It doesn’t even raise my eyebrow. It’s all you’re good for.

If you want the term “conservative ” you can have it. I will be a constitutionalist.

It’s inspiring that patriots rallying for Trump are refusing to be intimidated by the #NeverTrump allies throwing rocks, waving Mexican flags, and attacking the police.

There are only three choices: Clinton, Trump, and Irrelevance.

Lenin was right after all.

Leslie, you need to go in a group that includes some big men, or don’t go. The alternative is to meet up with people and form a group once you are there, but that’s up to chance.

I dislike the rising level of violence over the past few days. According to some of the commenters at The Gateway Pundit, the “protesters” travel from place to place, and are recognizable from videos floating around. If so, they have progressed in their tactics, and without adequate police protection, somebody will surely get hurt, and I do not want it to be you or your son.

Valerie: Great minds think alike. I have already arranged for a private security detail in the form of a former Green Beret. “Pity the fool” who tries to pick on me!

I believe we all know who’s backing the anti-Trump facists, and it’s not Democraps, Republicans, Libertarians, etc… More like Communists, Socialists, Maoists…

It’s rally day, about 1 pm, PST. The Trump rally is supposed to begin about 2. The radio reporters from KPBS (the local NPR station) are having the time of their lives people watching.

Today’s San Diego Union-Tribune had a front-page article saying that the police have publicly announced that they are willing to meet with anybody who wants to be arrested, and make arrangements in advance, so that nobody gets hurt. The guy who wrote the article is being interviewed, and they are all loving it. At least they are clear about who has been responsible for the violence in the recent past (the anti-Trump protesters).

These guys sound like they are all in their 70s, fondly remembering where they weren’t in the 60s.