Next week in Jerusalem, and beyond. 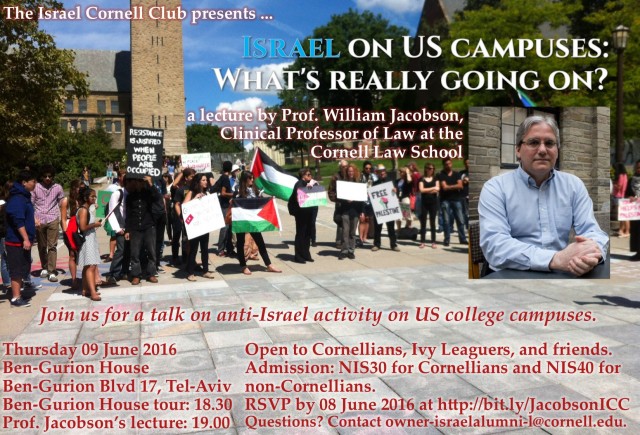 On June 9, I’ll be speaking to the Israel Cornell Club. Hopefully I also can see some Legal Insurrection readers there — it’s open. BUT, you need to register (HERE) since seating is limited.

It’s being held in the David Ben-Gurion House in Tel Aviv, which is the house once occupied by …. (please, don’t make me tell you).

As before, I expect to report on the human side — the victims of the Arab terror campaigns past and present.

This time, though, I’ll also have to do some more touristy things than I normally do because I’m traveling with one of my daughters — so I guess I’ll have to float in the Dead Sea again.

For those of you who want to follow along, the rough itinerary is:

Each day there also will be a Video of the Day in the sidebar relevant to some aspect of my trip.

Please kids, behave while I’m away.

Good job professor & Godspeed.
Enjoy your time with your daughter & as always,
listen to the woman.

Have a wonderful trip!

If you can explain American campus attitudes towards Israel (and Jews generally), you’ll have performed a mitzvah.

My own theory is that as the neo-Marxist leftist radicals of the ’60s have conquered our liberal arts institutions, they have brought along the political tactics of propaganda and victimology. If people can be convinced they are victims and their lives and futures hang in the balance, they are easily turned against perceived “victimizers,” and serve the political goals of the Movement/State unintentionally.

Have a good trip and, for heavens sake, do not honk your horn anywhere near the walls of Jericho.