Hillary declares herself the Democratic nominee, Rep. Ellmers gets the boot, and Michael Reagan want you to stop comparing Trump to his Dad

A handful of primaries, yet another presumed party nominee, and other sundry tidbits from last night’s news blast.

No word on whether Hillary’s boxy, getup tunic-thing cost the $12,000 her last one did.

Breaking: President Obama called Hillary Clinton to congratulate her on securing the delegates needed to clinch the Democratic nomination. 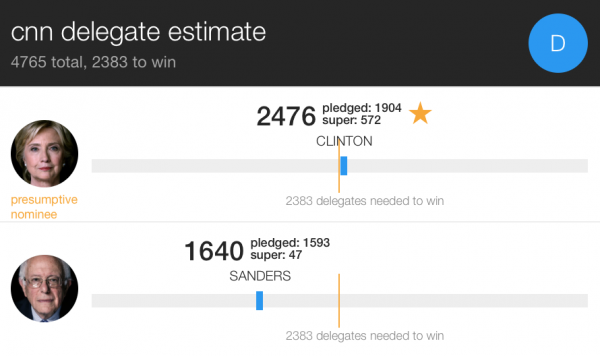 The New York Times reported the Sanders campaign is planning a huge staff layoff Wednesday. Other sources report the campaign is still planning to host rallies in D.C. later this week.

But at least he got a consolation call!

BREAKING: Obama calls Bernie Sanders with thanks for energizing voters, will meet with the Vermont senator on Thursday

Democrats may have as difficult a time unifying their fractured party as Republicans, if this is any indicator of widespread sentiment:

Crowd at @BernieSanders rally booing loudly at images of @HillaryClinton and chanting "Bernie or Bust." pic.twitter.com/B0rgIjuxmp

Trump won everything (obviously), but Kasich and Cruz, neither of whom are still in the running, posted paltry numbers.

When Trump briefly veered off prompter, well, see for yourself:

Rep. Renee Ellmers gets the boot

Despite Trump’s endorsement, three-term Rep. Ellmers failed to hold on to her seat. From Politico:

Rep. George Holding won the Republican primary for a newly redrawn district in North Carolina, beating Rep. Renee Ellmers, who became the first GOP incumbent to lose in a primary this year.

Holding, who was first elected in 2012, had 52 percent of the vote with nearly two-thirds of precincts reporting when The Associated Press called the race. Ellmers, a three-term incumbent who was drawn into a new district this year and a rare incumbent-on-incumbent primary with Holding, trailed with 24 percent of the vote. Greg Brannon, a two-time Senate primary candidate, also got 24 percent.

Donald Trump backed Ellmers and recorded a last-minute robocall that her campaign released over the weekend. It was the first time the presumptive Republican presidential nominee had intervened in a congressional race this year. But it failed to make a difference for Ellmers, who faced over $1 million in outside spending from groups including Americans for Prosperity and the Club for Growth, which were unhappy with her House voting record.

Michael Reagan wants everyone to stop comparing Donald Trump to his dad:

But take heart, Election Day will be even longer than it ought:

Because you probably need a laugh:

"The flea circus is real, I tell you! It's real!! Look, I have one right here in my hand!" pic.twitter.com/6kcgxw1e3t

I listened to Michael Reagan a few times. A good guy, and the only one of Ronald Reagan’s kids who understands who his dad is. He is absolutely right, of course.

Actually one should compare Trump to Reagan: Reagan had a philosophy and real positions, while Trump does not. We had an idea of what Reagan would do. With Trump, I doubt even he knows. Oh, and Reagan was a stickler for traditional morality and banded his opposition based on their ideologies, not based on where they (didn’t) come from.

“What would you do with your time if you didn’t have to worry about income for life’s necessities?” – Bernie fan

Um, if history is any indicator; probably stand in line for toilet paper.

I blame Star Trek TNG for the idea that the necessities of life will be provided to everyone without cost.

Sorry, I may have slept through it. Is the Straw Man running around again? Who’s comparing Trump to Regan? It’s like comparing Scylla to Charybdis; different things entirely.

Actually, comparing Trump to a destroying, sucking whirlpool makes sense. But I would not compare Reagan to a dangerous cliff or many-headed monster. I would compare him to a captain who safely navigated the strait.

Ellmers was the Tea Party darling in 2010, beating out Bob ‘Who are You’ Etheridge. But, as happens so often, when she got to D.C. she went all RINO. Good riddance.

Woohoo! This is my district. Ellmers’ loss may be even worse than it looks, because Brannon, the third place candidate, probably took more votes from Holding than he did from Ellmers. If you get elected as a “tea party” conservative, you’d better act like one in Washington.

Word is that Hillary is still puzzling over a running mate. It seems she cannot decide between Goldman or Sachs.

If the MSM was doing its job would #NeverTrumpers be hating on the Clintons even more than on the Donald?
A moot point since they don’t report stuff (if they can help it) while flooding the zone every time Trump spits on the sidewalk.

In view of the intense focus on the Trump University lawsuit by the MSM and lack of inquiry by the same MSM on Laureate Education, it seemed worthwhile to look at Laureate-affiliated schools of higher education located in the U.S., Latin America, and elsewhere. Bill Clinton served as honorary chancellor for Laureate from 2010 until 2015, and he was paid $16.5 million. (Clinton Cash author Peter Schweizer points out a connection between Laureate chairman Douglas Becker and increased USAID funding to a non-profit Becker also chaired, the International Youth Federation, while Hillary was secretary of state.)

Walden University is an affiliate of for-profit Laureate Education … An audit by the Department of Education (DOE) shows that online Walden University gave over $300,000 in student loans to non-citizens (which is against the law) from 2005 to 2008. More recently, Walden ran afoul of the handling of student loan funds for students who had withdrawn,

“NeverTrumpers” don’t get their news from MSM

That’s ’cause most of them only read what other #neverTrumpers write.

And the American Thinker is hardly part of the “MSM”.

In fact, their contributing authors have been pretty consistently 70-80% #NeverTrump ever since last fall.

I wish they would. All these nevertrumpers do is get Trump support, and I don’t want to see him elected.

Huh? How do you think #NEVERTRUMP came about? As his cult of fools grew, a movement against the buffoon arose. Gee, I wonder why. And you blame THEM for the hump getting media attention? How do you think he got the votes in the first place? By being a train wreck the media couldn’t take their cameras off. Along the way, about 30% of ‘pubs decided they are in love with train wrecks.

So, those of us who don’t like train wrecks are just supposed to shut up and suck it up? Do you really think that will turn the cameras away from the train wreck?

Boy LI and KK have really gone downhill, publishing this and ignoring the Richard Simmons news.

Snopercod, when we have effectively unlimited energy and something that can repattern that energy into anything it has scanned, it will be. Until then. …