But the White House wouldn’t have made him a poster boy if he told the truth. 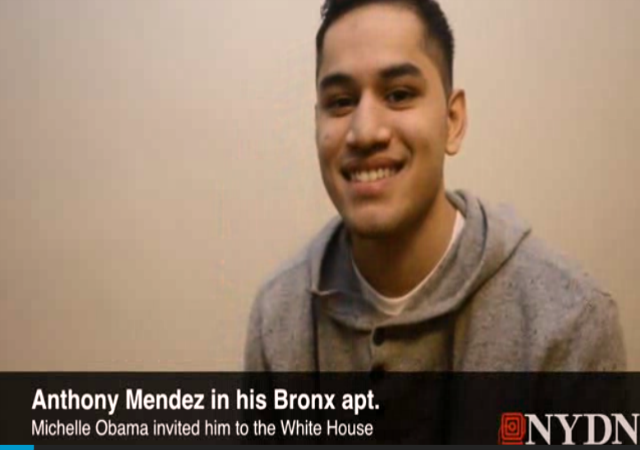 First Lady Michelle Obama asked Anthony Mendez to attend the 2015 State of the Union with her since he overcame a tough childhood to advance to college. However, he never told her or anyone else that he didn’t even make a 1.0 GPA at the University of Hartford and faced expulsion.

Mendez admitted in a Vox op-ed that he accepted the invitation despite knowing the university would not accept him back for the spring semester.

Mendez came home for the holidays when he received a phone call:

“Hello, is this Anthony?”

“Yes, who is this?” I figured it was someone from Hartford, closing out any remaining business.

“Anthony, this is the Office of the First Lady of the United States. We’d like to invite you to attend the State of the Union address next week with the First Lady. Are you available and interested?”

Mendez met Mrs. Obama over the summer through the Reach Higher program. There he told her and others about his tough childhood, living in a homeless shelter and waking up at 4:30AM to get to school on time. He also lost his best friend in his freshman year. So it comes to no shock why she chose Mendez.

A few days before the address, the White House announced Mrs. Obama’s guests. Of course the media pounced on Mendez and wanted to know his story:

Within 10 minutes of the announcement, I was flooded with emails and phone calls from media outlets wanting to learn more about my history and why I was a guest. I did a brief interview with the New York Daily News — they focused on my journey from being a homeless teen in the Bronx to the White House. They called me tenacious. I was a success story.

The next morning, I woke up to so many phone calls, emails, and messages that I didn’t know what to do. I was completely overwhelmed. At first, the attention felt good — I was becoming famous. But then I became overwhelmed. I felt like I was lying to the press. They didn’t know my real story, how I was about to fail out of college. I felt like I didn’t deserve the attention.

Mendez says he felt like he didn’t deserve the attention, but he didn’t tell the media about his disastrous first semester at college. He felt like he was lying to the press because he did lie to them. From Fox 61:

Mendez is now a freshman at the University of Hartford and is studying political science. He hopes his story inspires others to overcome adversity and reach for their dreams.

“I want people to know the story,” he says. “That’s why I say it out there, even with my friends on the track team, I was captain, I’d tell them I come from a bad background. I struggled. Everyone struggles. Everybody wants to act like they have problems. It’s just about how you use those struggles and overcome them.”

But the visit gave him an opportunity to try again at Hartford. The president said the school would offer “support and guidance.” Mendez said this made him feel “used” since they gave him the second chance due to his attendance at the State of the Union. But he went ahead and took it.

Mendez didn’t do well. Again. He did not fully explain why he couldn’t keep up his grades at the university. He said in the fall he studied courses he didn’t like, but never mentioned if he changed his major or tried different classes. He didn’t say if he had a full time job or too many activities.

The school said he could not return after the summer.

The White House asked Mendez to become a full ambassador to the Reach Higher program, the one that first brought him to the Obamas. He agreed, but did not tell them he failed out of college:

The theme was called “Beating the Odds” and centered on the obstacles we had all overcome to attend college. Seeing so many kids look at me as someone who beat the odds and getting such admiration was difficult for me. I wanted to tell them how messed up everything was. But I just couldn’t get the words out because I knew that if I did, I wouldn’t have that same impact. The same kid who had sat next to the first lady as an example of how anybody could beat the odds and attend college was no longer even in college. I was distracted the whole day. I felt like a fraud.

At the end, Mendez says the op-ed is a way to tell “the truth” and “letting go of all the pain and weight I hold in my heart of not wanting to disappoint anybody.” But the framing and flow seemed to place the blame on the White House when Mendez had the power in his hands to admit the truth. The White House would not have made him the poster boy if he spoke the truth.

If the young man is such a lousy student who literally could not make the grade, how did he get admitted in the first place?

So he flunked out once, the school gave him a second chance after he appeared (fraudulently, posing as an academic success story) at the SOTU, and then he shows his gratitude by flunking out a second time.

Cue the world’s smallest violin. His whining surely deserves to be set to music.

So he didn’t even make the grade to come back for the next semester under academic probation, and yet the school invited him back anyway. This kid wouldn’t know opportunity if it slapped him in the face.

At any point the White House could have asked him the darn good question. Caveat emptor

Why would the White House ask him for his transcripts when Obama won’t share his with anybody?

Mendez is now a freshman at the University of Hartford and is studying political science. He hopes his story inspires others to overcome adversity and reach for their dreams.

I’m having trouble imagining anyone actually dreaming of being a PoliSci major.

PoliSci is the undergrad major you sign up for on Registration Day when you see that the lines for Commercial Art and Psychology are too long.

Cue Dylan: “Only a pawn in their game”. He can always get work with the rent-a-mob.

She picked him because he was the only person she had ever met who was dumber than she. I have read her Princeton thesis and it is humbling. To think that she is married to the smartest man in the world is scary!

Didn’t Mattress Girl get invited to the SOTU babblefest too?

I didn’t think that colleges were allowed to flunk people anymore. Between the SJW’s claiming that being smart is an unfair horrible advantage that no one should be allowed and the new, improved government approved higher educational system that promises a chicken in every pot and an “A” course, it should be obvious that all semblance of ability is no longer a factor in college kids today. If you think my view of today’s college graduates is cynical, then I invite you to talk to many of them. Also, I stopped teaching when the university told me that I could not fail students who were doing so poorly that they did not even understand what the course I was teaching was about. For this poor child to fail…… well it simple boggles the mind for so many reasons.