Mateen Signed House to Brother-in-Law for $100

Mateen Signed House to Brother-in-Law for $100

Officials also said Mateen texted his wife during the massacre and she told him she loved him.

Orlando terrorist Omar Mateen “quit-claimed” his house to his brother-in-law with his wife Noor Salman as a witness in April. Initial reports showed $10 for consideration of the house, but a closer look at the document shows it at $100.

HUGE: Mateen signed over the deed to his house for $10 to family. Not suspicious at all. pic.twitter.com/KHAOH37pe9

Did Mateen’s family know more about his plans than they let on? The FBI has already toyed with the idea of charging his wife since she never told law enforcement of his desire to commit a terrorist attack on American soil.

A quitclaim deed allows a grantor to transfer interest in a property to the grantee. The deed is quite common in divorce cases. It is an active transfer, which means he transferred the property on that day to his brother-in-law Mustafa Abasin and sister Sabrina Abasin. 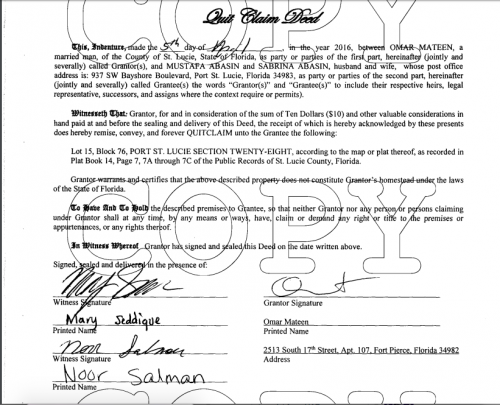 Another suspicious note is the address below Mateen’s name. He listed an apartment in Fort Pierce, located about 14 miles north from Fort St. Lucie and 120 miles south of Orlando. This means he already had another residence at the time.

The witnesses include his wife Salman and a woman named Mary Seddique, Mateen’s other sister.

The FBI has interviewed Salman and gave her a polygraph test, but no one has released details of the test. Sen. Angus King (I-ME) told CNN Wolf Blitzer that the FBI continues to speak with the Salman:

“It appears she has some knowledge of what was going on, visiting some of the other sites. We don’t know whether she was involved and knew about the purchase of the guns, which took place only about a week before the attack,” King said. “But she definitely is, I guess you would say, a person of interest right now and appears to be cooperating and can provide us with some important information on who this guy is, what his motivations were and what his plans were.”

She claimed that Mateen “assured her he was simply going to see friends, although she believed he was actually planning to unleash terror at the Pulse nightclub.” She once drove him to the club, a one to two hour drive from their home in St. Lucie, “to scope it out.” Mateen also visited Disney in April and early in June. Salman said they visited Disney World in April as a family, but officials believe that Mateen used these trips to case the amusement park.

She also went with him to buy “ammunition and a holster.”

Two hours after the attack, Mateen sent text messages to “Salman, asking if she’d seen the news.” In one text she said she loved him and even tried calling him. He never answered her calls. Officials have not said if she tried to contact police after Mateen contacted her.

The FBI has expanded the investigation into all of Mateen’s family, including those in Afghanistan. The Durand Jirga, Mateen’s father’s pro-Taliban group, lists Mustafa as a founding director and Sabrina also sits on the board.

Mustafa has similar views to his father-in-law:

In a paper he recently posted in Farsi, Abasin criticizes Afghans who have adopted American culture, according to an English translation by CounterJihad.com. He also rails against tribal chiefs who do not speak out against democracy in Afghanistan.

In recent social media posts, Abasin blames guns for his brother-in-law’s shooting, calls presumptive GOP presidential candidate Donald Trump a “racist” for wanting to restrict Muslim immigration, and says he’s involved with working with “refugee camps.” It’s not clear if the refugees include the displaced Syrian nationals the Obama administration is resettling in U.S. cities.

Mateen’s father Seddique praised the Taliban in his native Afghanistan and pretends to be the Afghani president. At first, he condemned homosexuals, saying that “God will punish those involved” and “not an issue that humans should deal with.” He walked back his comments when CBS News reached out to him.

*A zero was left out in error, but has since been corrected.

Very likely the transfer of the real property will be found to be a “fraudulent transfer” intended to defeat the civil judgments that will be made against the killer’s estate.

That makes the transfer voidable.

That woman was involved in this. Recall that the mother of the Tsarnaev brothers was, as well. It is unwise to think that the women in ISIS are less important than the men.

First of all, millions of property transfers are made all over the U.S. stating “for Ten Dollars ($10.00) and other good and valuable consideration”, so the amount here is no biggie.

Second, The transfer was made before any cause of action arose (for Wrongful Death? Assault?), therefore, the transfer should be legit.

There is a way to set aside the deed, just not as a fraudulent conveyance. If there was truly no consideration paid for the transfer, and the home had some equity in it, there are some equitable claims that could be made. (Different states have different rules. Consult your real estate professional)

If you PLAN a wrongful act, and attempt to dispose of property to avoid the consequences, that is enough in my jurisdiction.

Secondly, this is the (on its face) very definition of a “brother-in-law” transfer, meaning that it was not done for market-value.

Third, fraud is equity, except for a few statutes.

This transfer stinks, on the facts we have, and strongly suggests this was part of a scheme of planned preparations for jihad.

Gee, there certainly do appear to be a lot of people who knew what this shooter was up to.

I wonder if they have anything in common that would cause them to believe that opening fire on a roomful of Americans is perfectly justified? Hmmmmmm.

Oh surely not. Obviously this was just a “lone wolf,” “rogue gunman,” “disturbed individual,” etc., and not someone conspiring with his fellow ideologues . . . .

How can there be any question about whether the wife, and probably other friends and family members, were complicit in this heinous act. In a just world the wife would be jailed, or at the very least have her US citizenship revoked and be thrown out of the country.

US citizenship, once validly obtained, can’t be revoked for any reason. Salman was born in California, therefore she is a US citizen, no matter what she has done. She can be tried for her crimes, but she will still be a citizen and can’t be deported.